The big squeeze: pain ahead if Alberta cuts oil flow to B.C.

A spike in gasoline and other fuel prices would be one of the penalties paid by British Columbians if Alberta follows through on its threat to reduce crude oil exports to B.C.

By Nelson Bennett | March 19, 2018, 11:30am
The Trans Mountain pipeline between Alberta and B.C. supplies a large percentage of the West Coast’s energy needs | BIV files

When GasBuddy petroleum analyst Dan McTeague made predictions recently about Lower Mainlanders paying $2 per litre for gasoline, he wasn’t talking about a worst-case scenario. A worst-case scenario, should Alberta Premier Rachel Notley make good on threats to throttle back oil from Alberta to B.C., looks a bit more like paralysis. B.C., after all, is dependent on Alberta for its crude oil, gasoline, diesel and jet fuel, most of which comes in via the Trans Mountain pipeline.

The Parkland Fuel Corp. (TSX:PKI) refinery in Burnaby processes 55,000 barrels of oil per day (bpd) to produce gasoline, diesel and jet fuel. It currently gets all of its crude oil from the Trans Mountain pipeline. The refinery supplies 20% to 25% of B.C.’s gasoline and diesel. Alberta refineries supply approximately 50% to 60%.

And even the fuels B.C. brings in from Washington refineries to supplement a lack of local refining capacity are made from Alberta oil supplied via the Puget Sound pipeline system – a spur of the Trans Mountain pipeline with a capacity of 180,000 bpd.

B.C. drivers might be hit with more than gasoline price spikes should Alberta decide to play hardball.

“It would be also supply shortages,” McTeague said. “It would affect your mining, your agriculture, your ferries, your truck transportation. I think Vancouver, for all intents and purposes, would be shut down.”

Andrew Leach, associate professor at the University of Alberta’s Alberta School of Business, has suggested his province’s energy leverage has been overstated.

In a Twitter exchange with B.C. chemist and energy blogger Blair King, he wrote: “If you’re going to be left short fuel, being so with a deepwater port and a refining complex around the corner isn’t really the worst circumstance.”

King countered that Vancouver’s terminals are not set up to receive and store the volume of refined fuels that would have to be barged in from U.S. refineries, in the event the Parkland refinery in Burnaby suddenly had its supply of Alberta crude reduced or cut off.

And even if it was, McTeague noted, refining capacity on the West Coast is already tight. He pointed to a recent planned maintenance shutdown at Parkland that, according to his calculations, drove gasoline prices in Vancouver up by about $0.10.

“If a well-advanced, well-telegraphed planned shutdown of 25% of your production in the way of Parkland can cause $0.10 disruption, you can imagine what 40% to 60% would do if Trans Mountain were completely shut off. There’s no way under the sun you could replicate the amount of fuel coming in via pipeline through alternative rail.”

The discussion about B.C.’s vulnerability in a trade war with Alberta was prompted by Notley’s March 8 throne speech in which she put the BC NDP government on notice over its attempts to halt the expansion of the Trans Mountain pipeline.

“In the past, when workers in our energy industry were attacked and when the resources we own were threatened, Premier Peter Lougheed took bold action,” Notley said, through her lieutenant-governor. “We will not hesitate to invoke similar legislation if it becomes necessary owing to extreme and illegal actions on the part of the B.C. government to stop the pipeline.”

Alberta may have no more authority to determine what products flow on a federally regulated pipeline than B.C. does. But it does have control over interprovincial exports of its resources. And as one expert says, Notley has more legal levers at her disposal now than Lougheed did in the 1970s.

As a direct result of Lougheed’s standoff with Ottawa, the Canadian Constitution was amended in 1982, with Section 92A giving provinces more control over their natural resource exports.

“Legally, the government of Alberta can do that because there’s a fairly long-standing legal precedent that governments can control the amount of a natural resource that’s produced and/or exported from a province,” Morton said.

Dwight Newman, a constitutional law expert at the University of Saskatchewan, said there might be at least two other options available to Alberta, although they might be subject to legal “testing.”

Because Alberta owns the oil and gas produced there, it could decide not to sell oil to B.C. any longer, Newman said.

The Alberta government could offer to buy whatever product producers were selling to B.C. and try to sell it to buyers in other provinces or states.

“It sounds legally plausible to me,” Morton said.

The multi-purpose pipeline transports diluted bitumen for export, via the Westridge Marine Terminal in Burnaby. Other crude oils from Alberta supply the Parkland refinery in Burnaby.

The Interior of B.C. is almost entirely dependent on the refined fuels – gasoline and diesel – that come from Alberta refineries through the Trans Mountain pipeline to a terminal in Kamloops.

As for the jet fuel that Vancouver International Airport (YVR) depends on, about 33% comes from the Parkland refinery in Burnaby. The rest comes in by tanker truck and barge from refineries in Washington state. But those Washington refineries get about 20% of their crude from Alberta via the Trans Mountain. The Parkland refinery in Burnaby also supplies 24% of B.C.'s gasoline and diesel and 30% of the Lower Mainland's fuel.

The Puget Sound pipeline, a spur of the Trans Mountain, splits off near Abbotsford and conveys Alberta crude to five refineries in Washington state. Some of that oil then comes back to B.C. in the form of gasoline and jet fuel. 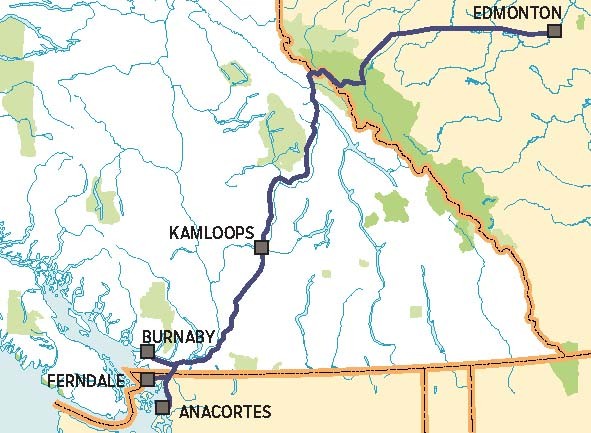 The existing Trans Mountain pipeline provides refined fuels to the B.C. interior, and crude to refineries in Burnaby and Washington State.

One of the reasons a consortium of airlines – the Vancouver Airport Fuel Facilities Corp. (VAFFC) – is investing $150 million in a new jet fuel receiving terminal, tank farm and pipeline is that the Parkland refinery has limited capacity to produce jet fuel, while the demand at YVR continues to grow.

Should Alberta reduce the supply of crude to B.C., imports of jet fuel from Washington state would have to be dramatically increased – provided crude oil from Alberta was still moving on the Trans Mountain pipeline and into Washington state via the Puget Sound pipeline.

The VAFFC jet fuel pipeline and tank farm now under construction would insulate the airport from such disruptions, since jet fuel could be brought in from virtually anywhere in the world. But that project is not slated for completion until 2019.

Presuming that oil could continue flowing through the Trans Mountain to Washington refineries, there is some question whether Vancouver has the facilities to significantly increase its storage capacity to bring in more gasoline, diesel and jet fuel from Washington, should the Parkland refinery no longer be able to receive Alberta crude.

As King points out, there are only three storage tanks available at the Westridge Marine Terminal. They are used to store jet fuel and other specialty fuels, whereas at least four storage tanks would be needed – for jet fuel, gasoline, diesel and marine bunker fuel.

“To suggest that the terminal would be able to off-load and store all the jet fuel, diesel, gasoline and bunker fuel needed to run southwestern B.C. simply ignores the laws of physics,” King recently wrote. “Three tanks simply can’t simultaneously hold four types of fuel and the three tanks aren’t nearly big enough to keep us supplied.”

And even if the receiving and storage infrastructure could be put in place, McTeague said, U.S. refineries don’t have the spare capacity to suddenly meet a spike in demand.

“The U.S. is not in a position to spare capacity. There’s planned maintenance, which you can anticipate, and prices go up. But unplanned shutdowns or disruptions of a geopolitical nature – that would send prices through the roof throughout much of British Columbia.”