By Glen Korstrom | March 16, 2018, 8:08am
Joanna Mileos, who owns Vancouver’s three-store Granville Island Toy Company, fears that online toy sales at sector behemoths, such as Amazon.com, could put her out of business | Chung Chow, BIV files

Independent Vancouver toy-store owners are uneasily watching troubles at competitor Toys “R” Us as the multinational toy-store chain liquidates assets after entering creditor protection and closing hundreds of stores in the U.S. and the U.K.

Because the 82-store Canadian branch of Toys “R” Us operates independently and has been profitable, it could be sold as a single entity, separate from liquidation at the company’s unprofitable and debt-laden 800-plus-store U.S. division.

MGA Entertainment confirmed to Business in Vancouver that its CEO, Isaac Larian, and a group of affiliated investors has bid for the Toys “R” Us  Canada operations.

“If there is no Toys ‘R’ Us, I don’t think there is a toy business,” Larian said in an email.

“Toys ‘R’ Us Canada is a good business.  They run it efficiently and have good leadership. At the right price, it makes economic sense.”

A separate bid may also be in the works.

Blaney McMurtry LLP partner Lou Brzezinski, who represents Toys “R” Us Canada creditors, told BIV on March 13 that he had spoken with someone who “said he had a group of people who are interested in buying the Babies ‘R’ Us brand in Canada.”

Brzezinski added that if potential buyers do not step forward in the next two weeks, it will likely be too late because either a deal will be done or creditors will decide to liquidate the company’s holdings.

“Canadian Tire might be interested because they just expanded their toys [department] but it is going to be hard to find a buyer.” 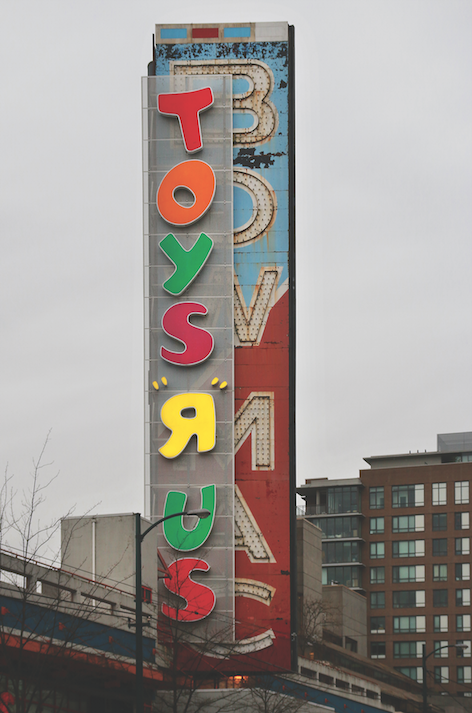 (Image: Toys “R” Us opened on West Broadway in the late 1990s and placed its sign on top of a heritage-protected sign for the former Bowell MacLean (BowMac) Motors, which billionaire businessman Jimmy Pattison commissioned in 1959 | Rob Kruyt)

Mastermind Toys, which has more than 60 stores across Canada, is unlikely to be interested in buying Toys “R” Us’ Canadian division, Brzezinski said, because Mastermind’s stores have much smaller footprints and their product mix is tilted toward intellectually stimulating toys as opposed to action figures.

It might sound logical for independent toy-store owners to rejoice at the prospect of their largest competitor folding, but that is not the case.

Joanna Mileos, who owns Vancouver’s three-store Granville Island Toy Co., is uneasy about what Toys “R” Us’ potential dissolution means for bricks-and-mortar toy selling – particularly in a climate where the B.C. government is hiking the minimum wage to $15.20 by June 1, 2021, 34% more than it is now.

She also has to face a new B.C. employer health tax starting in 2019, as well as rising City of Vancouver property taxes.

Mileos’ 23-employee business is profitable but its online sales represent a single-digit percentage of the sales volume that her stores generate.

She tries to compete with other bricks-and-mortar retailers by having better customer service, but that dedication of resources is getting difficult to rationalize.

“It’s a lot harder for me, as an independent, to maintain a full staff and pay these kids a decent wage, especially for living in Vancouver,” she said.

“I always like to make sure that my stores have coverage so if a customer does have questions and you spend a few minutes with a customer, you can give them your full attention.”

While she expects that if Toys “R” Us dissolves she will see an increase in sales, she is aware that large players, such as Walmart (NYSE:WMT) and Amazon.com (Nasdaq:AMZN), have the deep pockets to allow e-commerce prices lower than what she can compete with.

She also thinks that price reductions were in part what felled Toys “R” Us.

“They have been doing too many loss leaders,” she said, referring to low prices aimed at luring customers into stores.

“They were selling [the hot toy item] LOL Surprise dolls for just a few dollars above cost – maybe a buck or two – while we were selling them for the proper price.”

Another challenge that toy-store owners face is a shift in interest among kids toward video games from physical toys, and the move by video game developers, such as Nintendo, to offer direct-to-consumer digital downloads. Many simpler digital games come in app form and are downloaded to smartphones from iTunes.

Statistics portal Statista’s data showed that Canadians spent US$303 million on mobile games in 2016. That is in addition to US$195 million for computer games and US$186 million for console games in that same year. •