Vancouver could get assist from Seattle NHL team

Various ownership groups in Seattle have failed through the decades with attempts to woo the National Hockey League (NHL) and land a professional hockey team, but a current proposal headed by movie mogul Jerry Bruckheimer and billionaire businessman David Bonderman has hockey watchers convinced that this time the stars are likely to align for the Emerald City.

An NHL team in Seattle in time for the 2020-21 season could also provide residual benefits for the Vancouver Canucks, ticket resellers and hospitality industry businesses in Vancouver, particularly on nights when Seattle’s team is in town, so there are many in Vancouver rooting for Seattle to be awarded a team.

“There are three important parts that the NHL looks at: the market, the building and the strength of the ownership group. I assume that they think that Seattle ticks all three of those boxes given the response that they’ve had.”

Indeed, Seattle’s Oak View Group – which is leading the city’s NHL bid and plans to spend US$600 million to renovate Seattle’s KeyArena – on March 1 held a drive to get deposits on seasons tickets, and within 12 minutes the team had attracted 10,000 deposits, the group announced on Twitter. The group later capped the number of deposits when it had received 33,000.

That frenzy for Seattle season tickets came a day after NHL commissioner Gary Bettman visited Vancouver and said that the opportunity for the Canucks to finally have a nearby rival is something that will influence the league’s board of governors – essentially team owners – who have the final say on whether expansion goes ahead.

“Am I mindful of the fact that in terms of the Pacific Northwest, having a geographic rivalry with Vancouver would be terrific?” Bettman asked.

“That’s obviously one of the factors that will be put into the equation, but first and foremost we have to be satisfied, as we were [with the league’s most recent expansion team] in Las Vegas, that the team can and will be successful in Seattle.”

Were Seattle to get a team, the league’s owners would also get to split the approximately US$650 million expansion fee – something that also creates an incentive for the league’s governors to approve the new team.

“It’s going to create excitement and force the Canucks to raise the bar.” 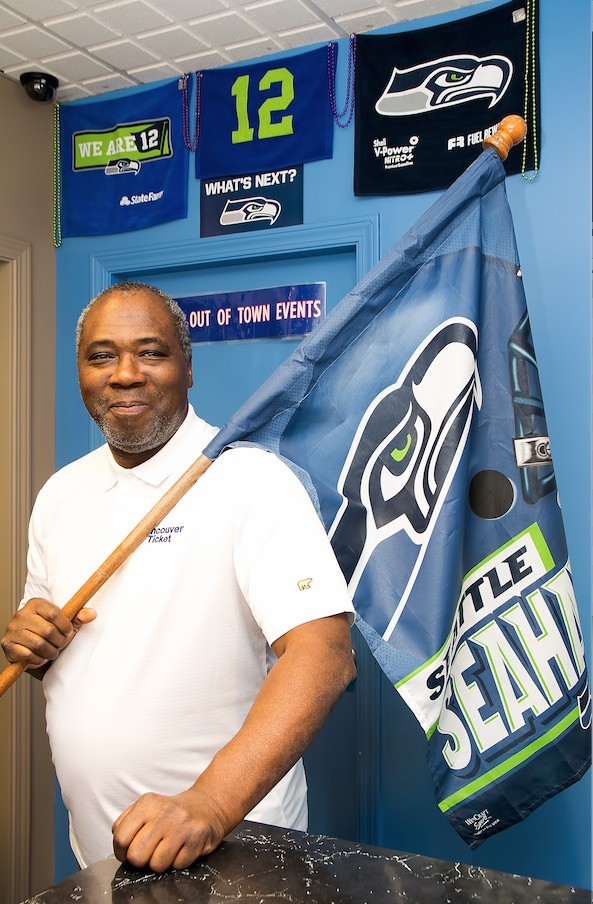 (Image: Vancouver Ticket and Tour Service principal Kingsley Bailey believes Vancouver sports fans will be interested in buying tickets for Seattle NHL games, much like they are for Seattle NFL games | Chung Chow)

Bailey added, however, that some hockey fans in Vancouver may drive to Seattle to see NHL games instead of spending money on the Canucks, particularly if the team does not improve.

Tickets for Canucks games are now worth about half of the face value, he added.

Vancouver Whitecaps FC president Bob Lenarduzzi told BIV that having a rival in Seattle heightens excitement for fans of his Major League Soccer franchise when they travel south for games against Seattle Sounders FC.

“It creates a much better atmosphere at games because [of] that core of supporters you’ve got in one section and they’re making a lot of noise,” he said.

“If you’re in that section you get taken into the stadium in advance of the general public, and afterward you wait until a certain point when the stadium is close to empty and you all come out together.”

Aaryn Vivian, president of the Whitecaps supporters group Vancouver Southsiders, said that more than 1,000 people often make the trek down to Seattle for Sounders-Whitecaps games, although last year the Southsiders stopped arranging travel for its members as part of a protest against U.S. President Donald Trump’s travel ban.

“We decided that we would make tickets available but people would have to make their own way to the game,” she said. “After that there were fewer people interested in travelling down to the States.” •