Modestly scaled commercial ventures show that small can be beautiful

Cat-themed café’s founder is among B.C. entrepreneurs who have reset their careers with help from non-profit society

This story is part of Business in Vancouver's Launch series, focusing on B.C. startups and emerging trends in entrepreneurship

Michelle Furbacher loves cats. She’s not just a casual cat fancier; in fact, her devotion to things feline is the biggest reason why she left her job of nine years as an art director at a publishing company to chase the idea of creating a cat-themed café in Vancouver after seeing a video clip of a similar business in Japan.

Furbacher, 41, launched Vancouver’s Catfe on the second floor of International Village mall in December 2015. It’s a hybrid café and cat lounge where guests can have a snack and play with its in-house cats.

“I’ve always really loved cats, and one day I just randomly happened upon a video clip on the internet about a cat café in Japan,” Furbacher said. “And then within a week, it just started popping up everywhere, like I saw that there was one in England and then one in San Francisco. It was kind of a time when cat cafés were popping up everywhere, and I kind of just decided to jump in and sort of ride the cat café wave.”

Furbacher is among a number of B.C. entrepreneurs making bold moves to start small businesses whose modest growth expectations are offset by the sheer joy of doing what they love most.

Catfe partnered with the BC Society for the Prevention of Cruelty to Animals to have rescued cats brought in by the society’s Drive for Lives program, which moves pets around by truck from various B.C. shelters to help find new homes for them. Catfe gets new cats every week and will have anywhere between eight to 12 cats in its lounge  on any given day. The cats are also available for adoption by guests. Over 400 have been adopted so far.

Furbacher’s main challenge before launching the business was finding the right location and space for it. She decided on its current spot in International Village mall because it had many windows, bringing in natural light – something appreciated by the sunbeam-loving cats, said Furbacher.

Another challenging step, said Furbacher, was figuring out how to get city permits to allow her to serve food while keeping animals on the premises. This involved a fair amount of back-and-forth with city hall and Vancouver Coastal Health.

To get guidance on some of the business challenges, Furbacher took a business course in 2014 through Embers Ventures, a self-employment program offered by the non-profit Eastside Movement for Business and Economic Renewal Society (Embers). The organization is one of the city’s service providers for WorkBC’s self-employment program, and also provides a 10-week build-a-business program and a four-to six-month grow-a-business mentorship program.

“We want to ensure that business training is accessible and affordable to all,” said Embers Ventures program manager Johanna Li. “Many of our clients don’t have the resources to take business classes that cost in the thousands of dollars. Our classes are very, very affordable and we believe that everybody deserves a chance to get the training, capacity building and mentorship they need to be successful in business, even if they may not be able to pay a great deal of money for that.”

Furbacher said Embers was a crucial element in her efforts to get her business off the ground.

“They definitely helped me get the whole business plan organized,” she said. “The people that I met through Embers, they had their own experiences dealing with city hall and stuff like that, so I was able to get tips from other people and find out things that I wouldn’t have otherwise found out that I needed.” 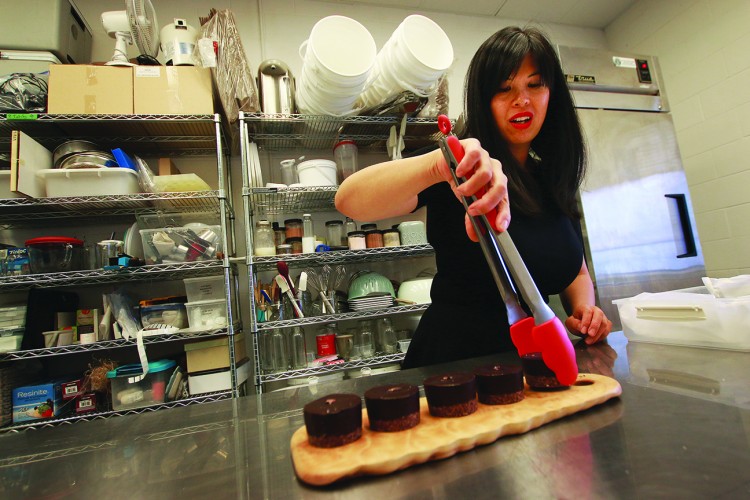 Living Lotus founder Audrey Wong: “I liked that it was a group of people that had already done other things in their lives but wanted to start a business and didn’t really know where to go from there” | Rob Kruyt

“When I say that we’re a raw vegan company, what that means is that it’s just made strictly from plants – so there’s no additives in it,” said Wong, 36. “Our goal is to provide a healthy alternative to people, not just people with restrictive diets. But if we can get people to stop eating white refined sugar and the filler foods, then we’ve done our job.”

Living Lotus doesn’t have a retail store, but runs a commercial kitchen that generates most of its revenue from wholesale distribution to 26 different retail stores, including Pomme Natural Market in Port Coquitlam, Fresh St. Market and Be Fresh Local Markets. Along with two part-time employees, Living Lotus also hosts workshops for four to eight people. This year, it’s planning to host two workshops a month.

Like Furbacher, Wong also went through Embers Ventures, attending the grow-a-business mentorship program in 2013 just before starting her business.

“I really liked it…. I liked that it was a group of people that had already done other things in their lives but wanted to start a business and didn’t really know where to go from there.”

The business’ origins are in Wong’s years of work in costuming for the film industry. She found that with the long hours – 12-to-15-hour days were common – she couldn’t maintain a healthy diet. In 2007, she went on a plant-based diet and found that she loved it. A few years later, she went on to study at RAW Foundation Culinary Arts and Nutrition Institute in Vancouver, becoming a certified raw-food chef.

“I was already vegetarian at that time and I already didn’t eat sugar,” Wong said. “So it was a big concern of ‘How am I going to survive in this industry and not be able to fuel myself throughout these long days?’ An actor had given me a cookbook in 2005 and it was a raw-food cookbook, but I had not looked at it until 2007. So I started sort of supplementing my food – still eating off catering, but just bringing more of my own stuff to work and being able to fuel myself, and being able to work those long hours.”

Living Lotus is not yet 100% sustainable – more wholesale distribution will be needed to make that happen, Wong said. In the meantime, she still works in films four days a month.

While the transit of Wong’s career was pointed away from the film industry, Jennifer Shanse was moving in the opposite direction. Shanse, 40, went through Embers Ventures’ build-a-business program, which taught her business skills necessary to pursuing filmmaking for a living.

“Before I was in that program, I was trying to do it alone, and there’s so much information on the internet that I figured, ‘Oh, I can figure this out,’” Shanse said. “But … I didn’t know what to prioritize; it was just research, research. They [Embers Ventures] were really motivational to get me out the door, get me talking to potential clients, talking to the competition, potential allies and partnerships.”

Shanse earned a degree in film production and creative writing from the University of British Columbia in 2002. She came to her decision to start her own business after travelling and working overseas.

“When I came back home, I was kind of at a crossroads,” she said. While mulling her options, she started out by shooting wedding videos, live events and promotional videos for small businesses and non-profit organizations. It was then that she found her niche.

“Shooting the promotional videos, [it] just felt like that aligned with me the most. It gave me creativity; it felt like I was helping small-business owners and non-profits – that’s really important to me. People who are going out there and they’re not necessarily getting a whole lot back right away, especially if they’re small-business owners, they’re doing what they love doing and they’re probably struggling a little bit at it.”

Last year, the company created a promotional video for United We Can, a non-profit organization and recycling service that provides jobs for low-income residents of the Downtown Eastside.

But it also has a commercial recycling service in which it picks up containers from places like Vancouver Convention Centre and hotels, restaurants and bars in Vancouver.

“United We Can wanted to grow that [commercial] side of the business and grow that aspect through a promotional video they could use as a sales tool,” Shanse said.

Shanse works with her partner, who also has a film background and, in addition to holding a full-time outside job, helps her with pre-production, production and editing.

UpperStory Films supports between 30% and 40% of the household income.

Shanse’s goal is that over the next year, her partner will have the option to work in the video business full time if he wants to.  •