Almost six-in-10 residents of British Columbia think it is time to look at an outright ban of foreign investment in real estate in the province, according to the results of a Mustel Group survey conducted in partnership with CBC.

The survey also found that 86% of British Columbians support measures to curb foreign or speculative investment and believe the impact of speculative buying is hurting the province. Of these, 65% say it is having a significant impact, 33% say they feel it is having some impact and only 2% said they believe it is having no real impact at all.

Among property owners, 78% said they think the province should put measures in place to address housing affordability, even if those measures make their properties less valuable.

More than 90% of those surveyed said they are concerned about housing affordability in B.C. This concern is highest in Metro Vancouver regions other than the city of Vancouver (96%). Those in the Interior report the lowest level of concern. 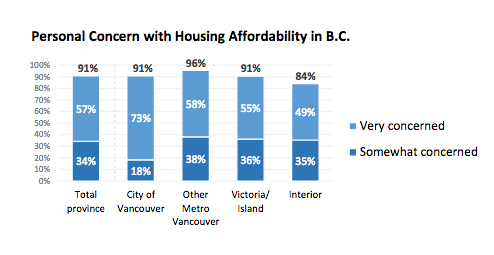 Mustel conducted a survey of 400 residents of B.C. in April.