By Nelson Bennett | May 8, 2018
Gas prices in Vancouver last week hit $1.61 per litre – the highest recorded by a major city in North America: analyst.

British Columbia doesn’t want Alberta’s “dirty” oil, but if Big Oil wants to invest $10 billion to $15 billion in a new refinery somewhere – maybe even in B.C. – Lower Mainlanders will be happy to buy the gasoline and diesel.

That was the solution Premier John Horgan offered last week, when addressing record high gasoline prices in Vancouver and his government’s opposition to a pipeline project that, according to one analyst, would immediately shave $0.10 off the price of gas in Vancouver.

Whether he meant that new refineries should be built in B.C. or Alberta is not clear. Asked to clarify what he meant by “here,” Horgan’s office wrote: “It could be in B.C., or elsewhere. Those discussions haven’t begun yet.”

Gas prices were up last week throughout North America. But in Vancouver, they broke a record, hitting $1.61 per litre.

“That is the highest price ever paid by any major city in North America, period,” said GasBuddy petroleum analyst Dan McTeague, who in March predicted gas prices in Vancouver would hit $1.60 per litre by the end of April.

Vancouver’s gas prices are so high, in part, because of taxes. Lower Mainlanders pay $0.33 per litre in various provincial taxes, including carbon taxes and a Metro Vancouver transit levy of $0.17 per litre.

But supply is also an issue, though it’s not necessarily a Canadian refining capacity issue.

According to the Canadian Fuels Association (CFA), Canada’s refining capacity is almost perfectly matched to its consumption, although in B.C.’s case, it depends heavily on Alberta’s refineries.

Provincially, B.C. lacks refining capacity. B.C.’s two refineries produce only 67,000 barrels per day (bpd) of gasoline and diesel, whereas B.C. consumed 192,000 bpd in 2015, according to the CFA. The Parkland Fuel Corp. (TSX:PKI) refinery in Burnaby produces 55,000 bpd and supplies about 25% to 30% of Vancouver International Airport’s jet fuel supply.

Alberta’s refineries supply about 100,000 bpd to B.C., and about 30,000 bpd is imported from Washington state refineries, according to the CFA.

Regionally, there is a shortage of refined fuels in the Pacific Northwest, McTeague said – in Washington and Oregon. 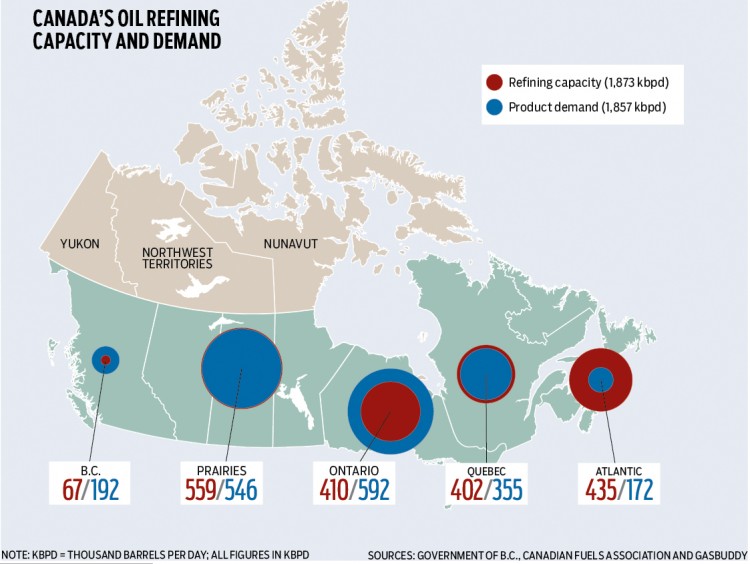 Current pipeline constraints, he said, add $0.10 per litre to the wholesale price of gasoline in B.C.

Horgan isn’t the only B.C. politician who has suggested Canada needs more refineries. So has BC Green Party Leader Andrew Weaver.

“Why are we not meeting our domestic market?” Weaver recently asked in an interview on BNN. “If we cared about jobs and the economy, we’d be refining in Alberta.”

Except Canada is already meeting its domestic demand, and Alberta just recently built a new refinery: the $10 billion Sturgeon refinery, which produces diesel – something that could be in greater demand on the B.C. coast when new international caps on sulphur emissions force some international shipping companies to switch their vessels to diesel from bunker fuel.

McTeague said neither Horgan nor Weaver seems to understand that the issue for B.C. is a transportation capacity problem, not a refining capacity issue.

“They’re twisting themselves into pretzels to try to obviate the simplicity of a simple pipeline that will allow them to have as much gasoline as they need,” he said.

The Trans Mountain pipeline’s current capacity is 300,000 bpd. It also transports a variety of crudes and refined fuels to B.C. and Washington state.

Under a $7.4 billion expansion plan, an additional 590,000 bpd of capacity would be added. The new line would be for transporting crude oils, including diluted bitumen.

But the capacity of the existing pipeline – Line 1 – would also be increased by 50,000 bpd.

In other words, the expansion could provide nearly the equivalent of the Parkland refinery, if that additional capacity were used for gasoline and diesel refined in Alberta, although what flows in the pipeline is up to shippers, not Kinder Morgan.

“There will effectively be another Parkland refinery built by allowing 50,000 barrels of gasoline, diesel and light oil to make itself down the expanded Line 1,” McTeague said.

Ervin said that additional pipeline capacity for refined fuels would knock $0.10 per litre off the wholesale price of gasoline in B.C.

He said an additional $0.15 per litre would likely come off gas prices with the Trans Mountain expansion, because Canadian oil producers would get more for their oil, which would push up the value of the Canadian dollar.

“If we got more pipelines – bang! We’d get $0.10 off per litre in B.C., and then for B.C. and the rest of Canada, an additional $0.15 per litre off, if the exchange rate moved back up to par, as it probably would, once oil gets moving out of Western Canada.” 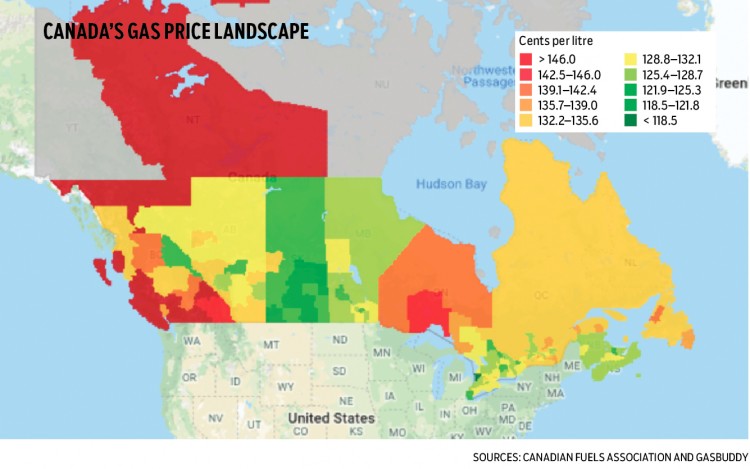 But Robyn Allan, an independent economist, has argued that the expansion will result in higher gas prices, not lower.

To help pay for the expansion, Kinder Morgan Canada (TSX:KML) needs to double the tolls it charges, and that will add about $0.02 per litre to the price of gasoline, she recently wrote in the Vancouver Sun.

But McTeague points out that there is, on average, an $0.18-per-litre difference in rack prices (the price wholesalers pay refineries) between Alberta and B.C.

So even if tolls added $0.04 per litre, McTeague said B.C. wholesalers would be getting refined fuels at about $0.14 per litre less than they pay now.

Gas by the numbers

Where B.C.’s gasoline comes from