Dan Baxter, Director of Policy at the B.C. Chamber of Commerce told Business in Vancouver on Roundhouse Radio back in February that the roll out schedule released for the minimum wage increases  was acceptable.

“What’s always been top of mind for our members is certainty and predictability,” said Baxter.

The move to a $15.20 minimum wage in four years is a year shorter than business groups, like the B.C. chamber of commerce advocated for.  However, Baxter says that despite this discrepancy, the B.C. roll out schedule provides a longer adoption time than a two-year roll out Ontario legislated.

Baxter, however, expressed concern about the increases being front loaded, meaning most of the increase will have to be absorbed earlier giving businesses less time to prepare and adjust.

Concerns have been raised about the impact the minimum wage increases will have on the restaurant sector.

Employment in Ontario has fallen 0.2% since the implementation of the minimum wage increase at the beginning of the year, while unemployment has stayed relatively constant at 5.6%, dropping 0.1% from January through to April. According to a report from Scotiabank, job losses and gains have been scattered across industries with no concentrations amongst those sectors with high dependence on minimum wage workers. 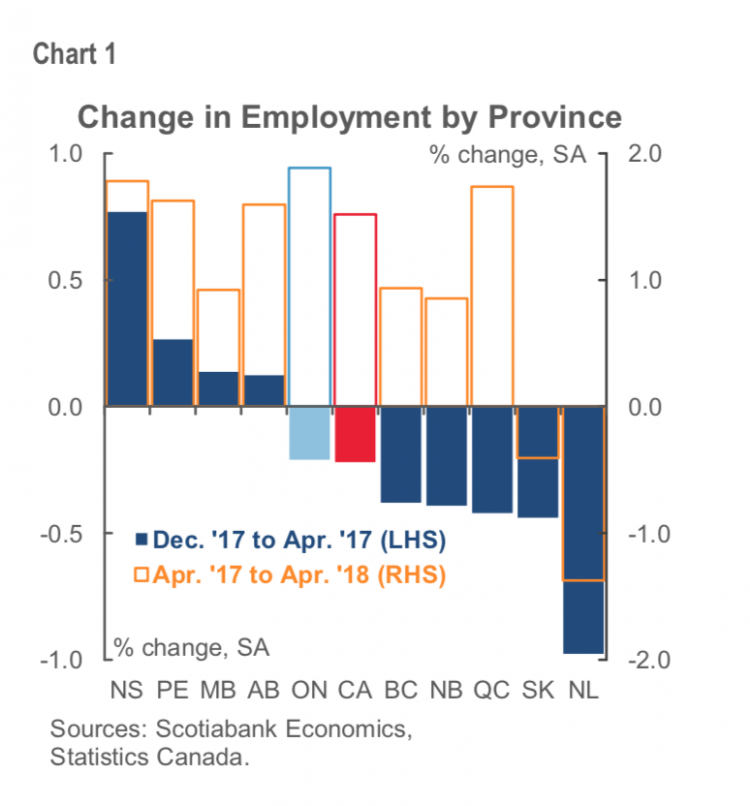 Ontario experienced a large decline of 50,000 employment positions in the first month the minimum wage increase became  effective. During the same period the unemployment rate dropped by 0.1 percentage points, from 5.6% to 5.5%, signalling that the decline in employment was the result of people leaving the work force. Data collected, however, does not identify what portion of those who lost employment during the month,  also left the workforce.

The food and accommodation sector, the lowest wage-rate sector, expanded its workforce by 2.6% since December. On the other hand, wholesale and retail trade’s employment fell 3.1%, however the report highlights that this decline is likely due to the slowdown in retail sales rather than the increase in minimum wage. 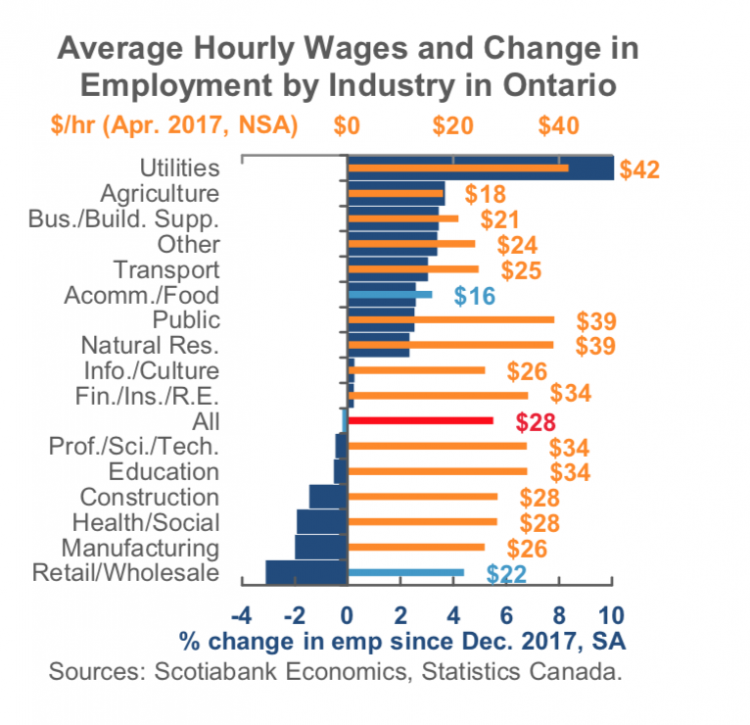 While general employment has been little affected, youth unemployment has contracted by 15,000 positions. The report indicates that the decline in youth jobs is likely result of a pullback in the retail sector that predated the minimum wage increase.

While the minimum wage increase has had only a minimal effect on jobs, the same cannot be said for the price of goods and services. According to the Scotiabank report, the minimum wage increase has been passed on to consumers through higher prices. The rise accounts for approximately 20% of annual inflation in Ontario. If you remove restaurants, housekeeping and childcare from inflation excluding energy, inflation rose by 1.7% compared to 2.2% when these sectors are included.