A much bigger factor in the Colorado-based owner’s glowing June 7 earnings report for the quarter that ended April 30, however, was CEO Rob Katz’s strategy of making the US$899 Epic ski pass the centrepiece of the company’s pricing structure. The pass provides skiers with unlimited skiing at Vail’s 19 resorts and limited access at dozens of other resorts around the world.

Vail’s changes to its ski passes after it bought Whistler Blackcomb for $1.4 billion in 2016 have been controversial, particularly among many longtime skiers at the resort.

They were upset because Vail eliminated the option for skiers to pay in advance for one- and three-day passes, thereby qualifying for a discount. The result was a perception that the resort operator was catering more to international jet-set tourists than to locals who cannot afford to travel to all of those resorts – even though the price of a season’s pass went down.

And while Resort Municipality of Whistler Coun. Steve Anderson said Katz told him a few weeks ago, during a meeting with council, that Vail plans to bring back the three-day pass for next season, it remains unclear exactly how much Vail will charge for those passes.

Anderson praised Vail’s new season’s-pass strategy, which makes passes available at a discount only early in the season.

“For a company that runs a ski hill, that makes good sense because they get a lot of cash coming in when they are not in peak operating season, and as you get closer to the lifts opening, these bargains start to disappear,” Anderson told Business in Vancouver.

Vail saw its resort revenue in the quarter that ended April 30 rise 6.5% to US$841.4 million, and its overall profit during the quarter rise 41.5%, to US$256.3 million, compared with the same quarter a year ago, despite challenging snow conditions across much of the U.S.

The company plans to spend US$40 million to build a gondola up Blackcomb Mountain.

Katz said during his June 7 earnings call with analysts that he believes the increase in revenues despite “challenging” weather “highlights the continued success” of Vail’s season-pass strategy and guest-focused marketing efforts, the importance of geographic diversification in its resort network and the “outstanding experience” it provides at its resorts.

He added that Vail in early June agreed to buy Washington state’s Stevens Pass Mountain Resort from Ski Resorts Holdings for US$67 million.

“Stevens Pass is a great addition to Whistler Blackcomb for our Pacific Northwest skiers with outstanding skiing,” Katz said of the ski resort that is a two-hour drive from Seattle.

Most people in Whistler who spoke with BIV said they think the acquisition will spur Stevens Pass skiers to try Whistler Blackcomb more than it will lure B.C. skiers to Washington.

“Quite frankly, I’ve never heard of Stevens Pass before,” said Whistler Mayor Nancy Wilhelm-Morden. “I’ve lived here since 1973, and why would I travel to any other ski resort when I live in the best one in North America?”

“These are the mountains that set the addiction and feed the dream,” said G.D. Maxwell, an avid Whistler skier and a columnist at the Whistler publication Pique Newsmagazine.

“If you’re skiing a little mountain in New Hampshire but you’ve got a pass that lets you ski Whistler Blackcomb, or Vail or Crested Butte or whatever, if you’re going to take a longer ski vacation that year, chances are pretty good you’re going to use that pass at one of those mountains.” • 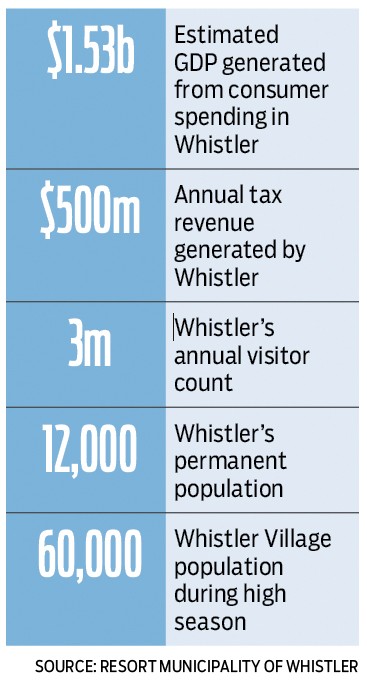