Sharc takes a bite out of home, business energy costs

“We’re trying to help with the environment and leave a small footprint,” said Andrés Amaya, owner of the South American-tinged brewery that serves customers biodegradable spoons and straws and recycles spent grain whenever possible.

So last year the brewer bought a made-in-B.C. thermal wastewater system that recovers heat energy from sewage and then hangs on to it to later heat or cool a building.

“As you can imagine there’s a whole ton of hot water a microbrewery uses not only to brew, but to clean the tanks and clean the equipment,” Amaya said.

Technology developed in B.C. has the potential to reduce emissions and energy prices for homes and businesses, while improving energy efficiency by 400%.

“If you spend a dollar, you virtually get $4 worth of heat back from your dollar,” said Sharc International Systems Inc. CEO Lynn Mueller, who came up with the idea after observing how much hot water his four children were using on showers and laundry while they were growing up.

“So the premise is really just that it’s a very efficient method to move heat,” Mueller said. “We don’t create heat; we just move it.”

Andina’s unit is a smaller version of the two industrial units at False Creek Energy Centre, which provides heating and cooling for five million square feet of apartments in the Vancouver neighbourhood.

Mueller estimated that one Sharc unit installed at a 200-unit apartment building would save the building 100 tonnes in carbon emissions annually. 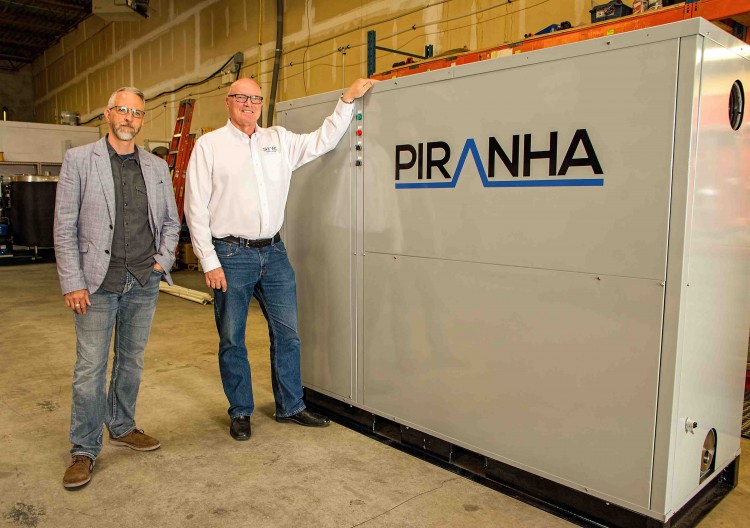 The City of Vancouver estimates that 54% of greenhouse gas emissions come from buildings, while sewage heat recovery supplies approximately 70% of the annual energy demand.

And the U.K. is where the Port Coquitlam-based company has been especially successful after establishing a joint venture with Scottish Water Horizons Ltd., a government enterprise that is integrating its technology into the public sewage system.

A year ago, the company’s revenue was approximately $1 million, and this year Mueller expects it will grow to between $20 million and $25 million before reaching $100 million by the end of 2019.

But the company is not focused exclusively on megaprojects.

It has also opened an office in California, where Sharc is targeting individual homes looking to reduce energy costs with units that cost about $3,500.

The mid-size units that heat apartment buildings run for about $60,000, while Mueller said the larger-scale flagship units needed for the Scottish joint venture will “go into the millions.”

But he added that cost savings pay for the units within three or four years.

“Everybody expects if they’re green, they’re going to pay more for it,” he said.

“We’re lucky because a lot of green technology, they have to wait 20 years to get their money back. We’ve got a rapid payback.”

There are still challenges for customers, though.

While Amaya bought the unit for his brewery last year, he still hasn’t been able to measure how effective it is at recapturing energy from the hot water he uses.

Andina has been awaiting upgrades from BC Hydro before the unit is cleared to install.

“We’ve been waiting for a while, and it looks like it’s going to be another while,” Amaya said, adding that the best-case scenario is that the unit is running by mid-to-late summer.