By Glen Korstrom | August 30, 2018, 2:11pm
Lululemon's flagship store in Vancouver is at the corner of Robson and Burrard streets | Glen Korstrom

Vancouver yogawear giant Lululemon Athletica Inc. (Nasdaq:LULU) shares soared after hours on August 30, after the company announced that it had unexpectedly high sales and profits in the quarter that ended on July 29.

The company generated US$95.77 million in net income, or profit, on US$723.5 million in revenue, or sales, in the quarter.

That represented a 96.6% hike in profit and a 24.5% hike in revenue compared with the same quarter a year ago.

New CEO Calvin McDonald, who has been on the job for 10 days, addressed a post-earnings conference call and called the post his “dream job.” Business in Vancouver noted last month, when McDonald was hired, that his complicated compensation could well exceed US$10 million, including salary, bonuses, equity awards and restricted share units.

He explained that his initial work as CEO will be to get to know the organization well.

“I feel it is important to meet as many people in the organization as possible,” McDonald said on the August 30 conference call.

“In my initial weeks and months, I will spend time in every part of the organization – in stores, our store support centres, our distribution centres and our guest education centres. My approach is to listen and to learn as much as possible about the organization and our guests from the teams across the company, and become grounded in all things Lululemon.”

Lululemon COO Stuart Haselden, who handled much of the conference call, said Lululemon’s strategic priorities going forward are to expand digital channels, ramp up “international expansion with a near-term focus on Asia,” and to merchandise better for men in attempt to increase that rapidly growing sales channel.

He also said the company plans to roll out more stores in North America.

“Given our momentum, and the recognition of what is currently working to drive our business, we are taking up our guidance for the year,” Haselden said. 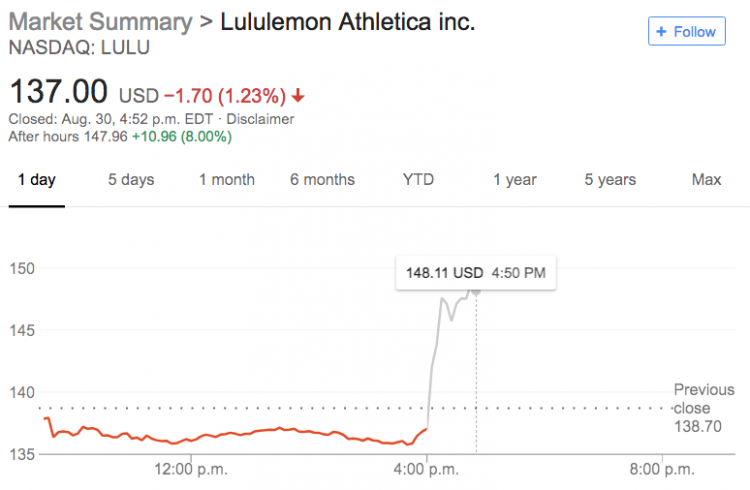 (Image from Google Finance shows that Lululemon shares fell 1.23% during the regular session on August 30 but spiked after hours, following the company releasing its earnings report.)