The cost to rent both one- and two-bedroom apartments remained flat in Vancouver year-over-year in August, according to new PadMapper data, which includes median rents for all homes that are currently available to rent or vacant and does not include those homes that are already rented out.

The average rent for a one-bedroom apartment was $2,000, which was unchanged compared with July and only 0.5% higher than it was a year ago. Two-bedroom rents, on average, didn’t change at all month-over-month or year-over-year and remain at $3,200.

Vancouver had long been the most expensive city in which to rent both one- and two-bedroom apartments, with Toronto coming in second place. This changed in April, when Toronto took top spot for one-bedroom rents, but Vancouver staged a slight comeback a few months later. Toronto is now solidly in first place for this home type, however; the average rent for one-bedroom suites was $2,140 in April – 7% higher than in Vancouver.

Vancouver remains the country’s most expensive spot for two-bedroom rents at $3,200, on average, but while Vancouver has seen flat growth over the past year, Toronto rents are growing by leaps and bounds. The average one-bedroom rent in Canada’s largest city increased 15.7% in the 12 months to April, and the average rent for two-bedroom apartments rose 14.3% to $2,800. This paints quite a different story than what was seen in January 2017, in which two-bedroom rents in Vancouver were 60% higher than in Toronto ($3,150 compared with $1,970, respectively).

The top 10 highest rents across Canada in August (source: PadMapper): 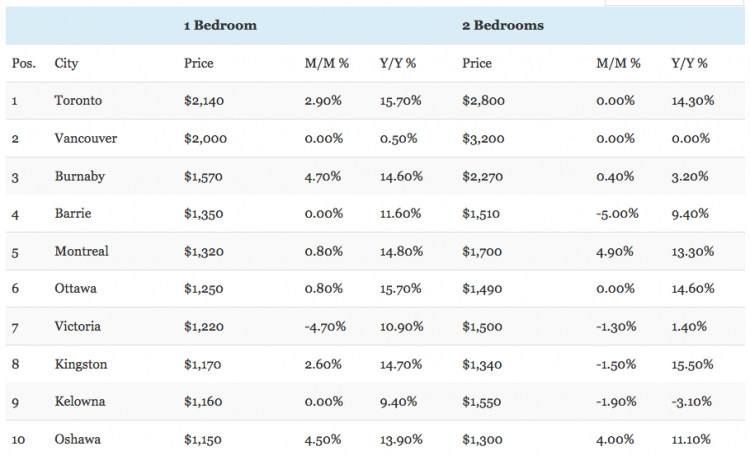