By Glen Korstrom | October 23, 2018, 10:20am
Zenabis chief compliance officer Karen Parent will ensure that marketing for her cannabis producer does not glamorize a lifestyle | Rob Kruyt

Cannabis producers are going to have to walk a fine line to avoid breaking the law when trying to raise consumer awareness of their brands.

They stuck with plain-packaging rules that ensure blandness, with no testimonials (such as by celebrities), attractive colours or images.

They are also forbidden, like tobacco manufacturers, from advertising in places where the content could be attractive to those younger than 18 years old. That means no radio, television or newspaper advertising. They also are forbidden from advertising their prices.

Health Canada, before October 17, when legalization went into effect, revealed that it had already warned a handful of unidentified cannabis producers about their marketing initiatives.

Those companies may have been Canopy Growth Corp. (TSX:WEED; NYSE:CGC), which owns the Tweed brand, and Aurora Cannabis (TSX:ACB), given that those companies both bought billboard advertising in Toronto.

“Some companies are pushing [advertising intiatives] beyond where they should,” said Stephen Parker, marketing and communications manager at the Vancouver-based licensed producer Harvest One.

He plans to ensure that all marketing for Harvest One subsidiary United Greeneries’ brands Royal High and Captain’s Choice meet a dual threshold. The marketing will neither be accessible to youths nor glamorize a lifestyle, he said.

“Age gates are very important to Health Canada,” he said, referring to security measures that limit exposure to youths. “That means no billboards and no commercials.”

The company has also held discussions with Newad, which offers marketing options such as encased posters above urinals in nightclubs. 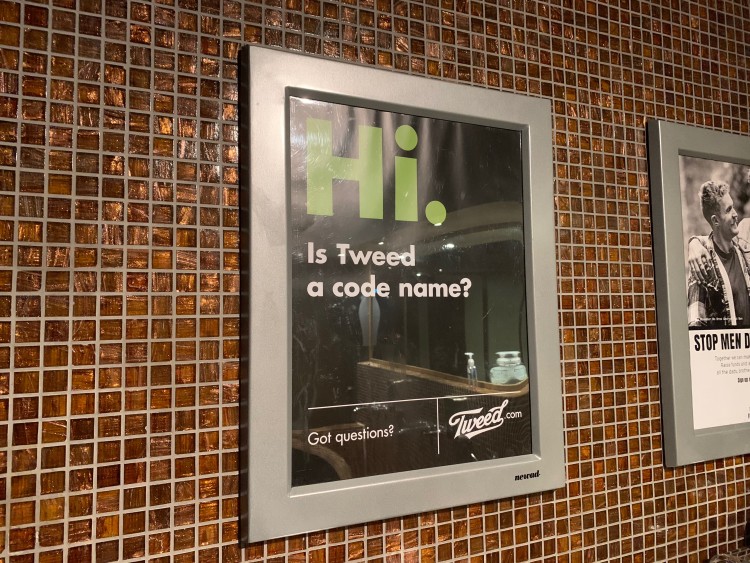 (Canopy Growth Corp.'s cannabis brand Tweed, on October 18, had advertising in Newad frames above urinals at the Imperial venue on Main Street in Vancouver | Glen Korstrom)

Lawyers, however, say that while age gates on websites indicate that a cannabis company has made some effort to ensure that youths are not viewing its marketing material, it is unclear whether that will satisfy Health Canada requirements.

Another question centres around the kind of content the cannabis producer puts on the website behind the age gate, said Karen Parent, chief compliance and quality officer at B.C.-based cannabis producer Zenabis Global Inc., which was created earlier this month when Bevo Agro Inc. (TSX-V:BVO) announced a reverse takeover of Sun Pharm Investments Ltd.

If it uses visuals of young adults and a party atmosphere with Top 40 music or is otherwise youth-oriented, it may be deemed to be glamorizing a lifestyle, she said.

Canada’s Cannabis Act explicitly prohibits marketing that evokes “a positive or negative emotion about or image of a way of life such as one that includes glamour, recreation, excitement, vitality, risk or daring.”

“We have a couple marketing strategies that we will be using,” Parent said. “I’d hate to divulge it right now but what we do plan has been vetted through our in-house counsel so we’re not offside.”

Effective marketing, she added, also comes from users who go on message boards, social media or customer-experience apps and tout the company’s products.

Dentons partner Shea Coulson said he expects that some of the ambiguity in the Cannabis Act around permissible marketing will become clearer as Health Canada issues policy bulletins.

“The government doesn’t want everybody to rush off to Federal Court on these issues,” he said. “It’s better to work with the regulator.” 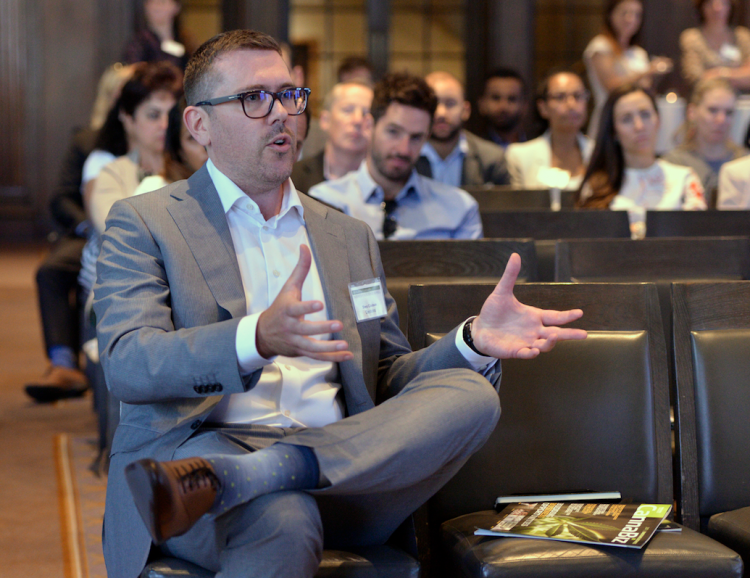 (Image: Dentons partner Shea Coulson asks a question at a cannabis-industry event sponsored by Business in Vancouver and CannaBiz magazine at the Vancouver Club earlier this year | Dominic Schaefer)

The Cannabis Act states that pot producers can’t market “in a manner that there are reasonable grounds to believe could be appealing to young persons.”

Coulson said he does not know what the government considers “reasonable grounds,” adding that other clarity needs to come from the provincial government, which enforces the Cannabis Control and Licensing Act.

The Cannabis Act tells marketers that it is OK for a licensed producer to promote a brand for its characteristics and for being better than another, but the provincial act says that no one is able to promote one cannabis brand over another to a licensee, such as a retailer, said Coulson.

That provincial law also prohibits producers from giving, or agreeing to give, retailers any gifts, rewards or remuneration to promote the producers’ brands.

This sounds stricter than provincial regulations around alcohol, which allow producers to pay for some education, such as sommelier training, for retailers’ employees, including the cost of travel, he said.

“I suspect that you’re going to see that sort of thing loosen up [for cannabis producers],” Coulson said. “There’s no reason for it to be different than the way it is for liquor.” •