By Glen Korstrom | November 5, 2018, 8:59am
Blissco CEO Damian Kettlewell stands in front of his company's branding on a background that resembles a living wall at his Langley facility | Glen Korstrom

It stands in contrast to operations at Canada’s largest cannabis grower, Canopy Growth Corp. (TSX:WEED), which has about 2.4 million square feet of licensed grow space in B.C. and has plans to double production.

BlissCo’s 12,000-square-foot facility is in a site that previously housed an illegal cannabis-growing operation. Two large boulders are fixed in concrete outside mirrored windows at the main entrance – discreet protection against the risk of a smash-and-grab theft.

Despite having an unlisted address and still without a Health Canada sales licence, the licensed producer invited more than a dozen media representatives and investment brokers for an October 30 site visit. 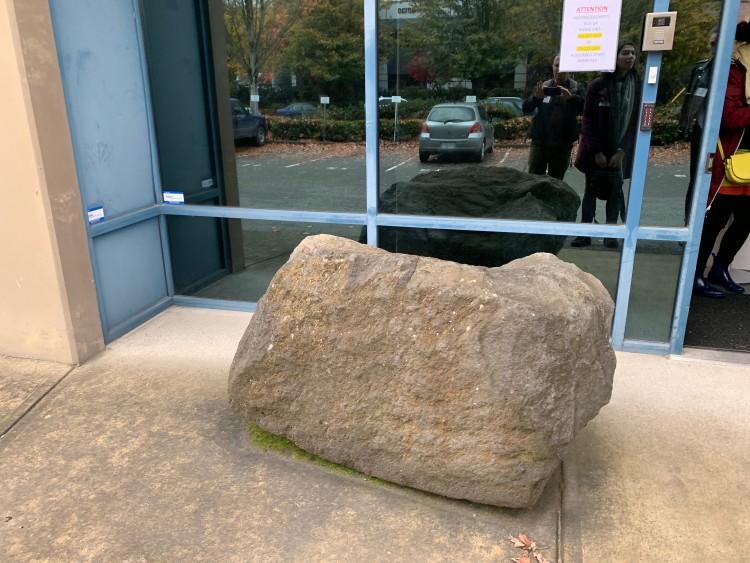 (Image: A boulder sits outside the front entrance at Blissco in Langley | Glen Korstrom)

Visitors who are buzzed through the front door can immediately detect the faint smell of cannabis. In a tiny room with a computer terminal, they sign to confirm that they have read a visitor’s agreement. They provide their name and a photo is taken.

Once buzzed in through a second door, visitors wait in an antechamber with access to a room where they can wash hands and don smocks, hair nets and bags to cover their shoes.

They then walk through a solution of water and disinfectant before being taken through a pass-code-protected final door to see BlissCo’s operations.

“There is no registered pesticide in this facility,” production manager Shawn McDougall called out to the throng of about a dozen media representatives as they entered the cavernous space.

“We only spray water, nematodes and biologics. What I mean by that is that we’re using other pests to navigate toward cannabis pests.”

One of the conditions of entry is that the visitor must not have an infectious disease or the flu – things that could damage plants. Touching products without gloves is also taboo.

There is a room on the right that can be seen only through a thick glass window inlaid with metal mesh. Camera shutters click to get shots of the 875 cube-shaped plant pots that are about six inches on each side. 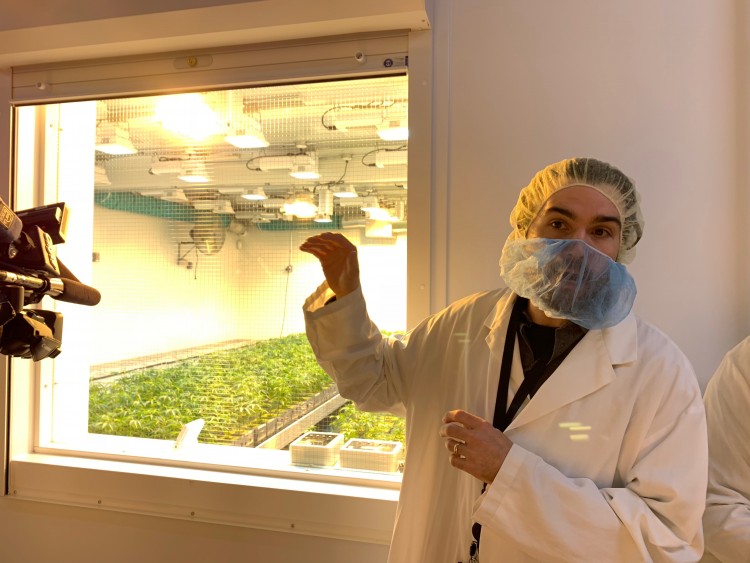 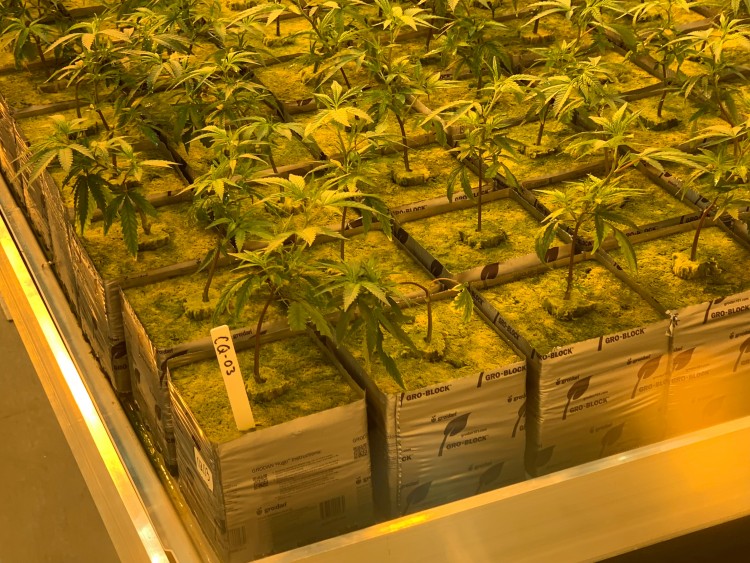 (Image: Smaller cannabis plants are grown from being seedlings in cube plant pots that are about six inches on each side | Glen Korstrom) 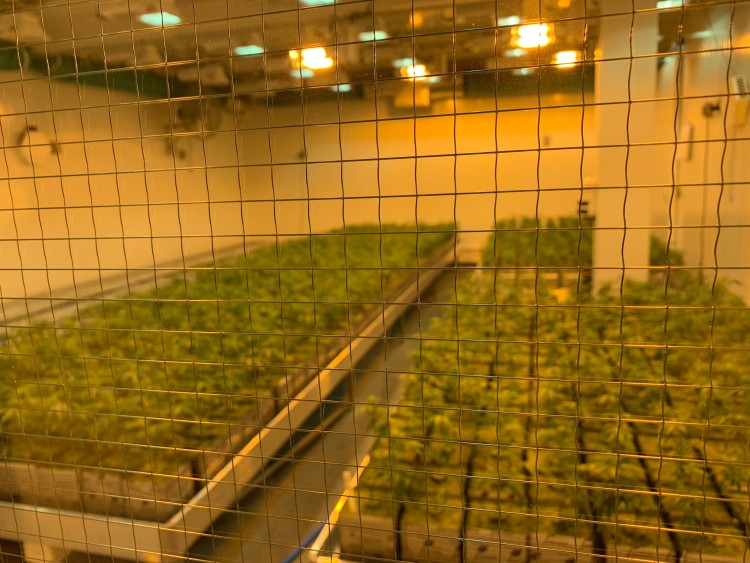 (Image: The room with smaller cannabis plants is visible through a thick glass window with inlaid wire mesh | Glen Korstrom)

McDougall explained that staff will move 603 of the plants to an adjacent room after BlissCo’s planned October 31 harvest – a second harvest for the company that CEO Damian Kettlewell said he expects to produce up to 300 kilograms of dried flower during its first year in operation.

BlissCo has supply agreements with licensed producers that allow it to access and sell a further 2,000 kilograms, mostly to medical patients, during the year. Dried-flower product is earmarked for medical patients exclusively and will be priced between $7.50 and $10 per gram, Kettlewell said.

That adjacent room has about 600 mature cannabis plants that have been under bright lights, 18 hours per day, for more than eight weeks. Night is about to descend on them, however, as part of a gardening trick. Darkness and air conditioning for 24 hours will dehumidify the grow room and coax the mature plants to produce more of their desired essential oils.

McDougall called over an unidentified employee, wearing a red hair net, who has the necessary code to open the door to the room with the mature plants. 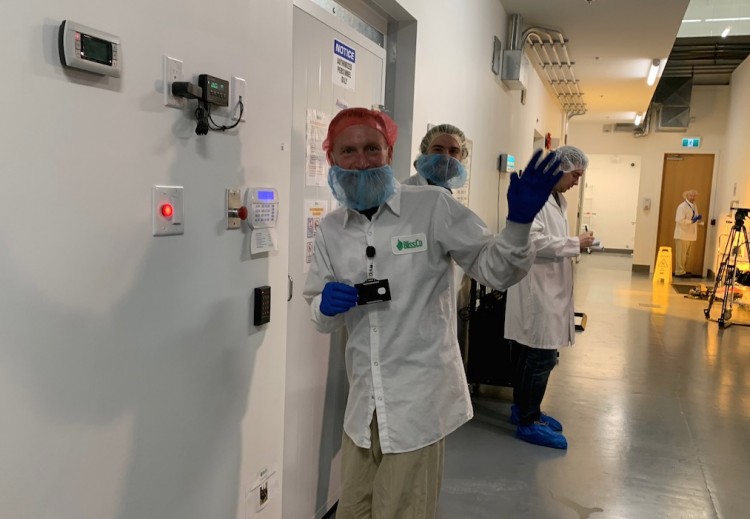 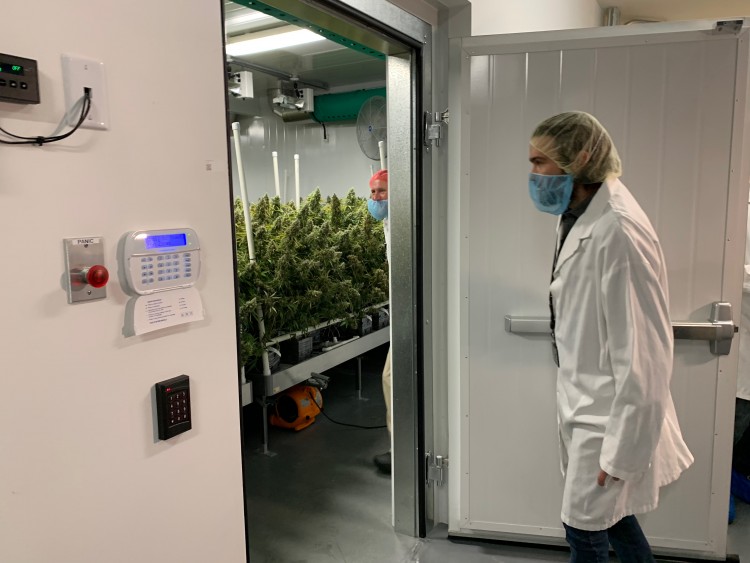 (Image: The door opens to the room with large cannabis plants | Glen Korstrom) 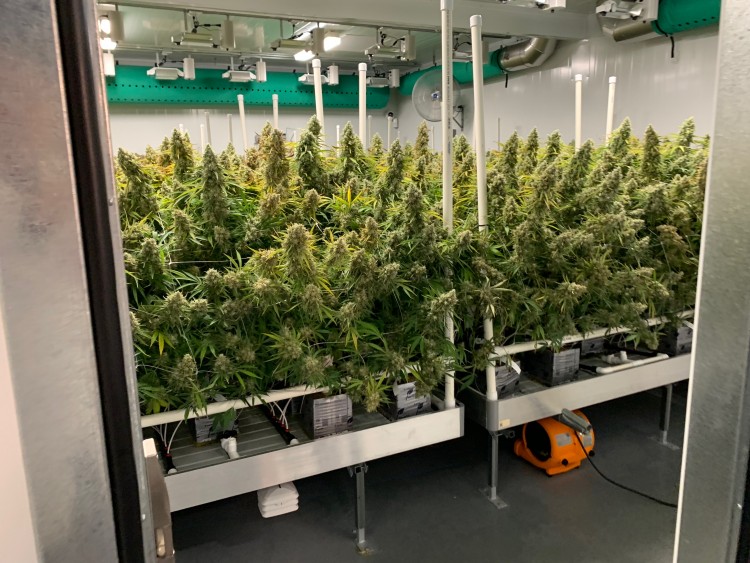 (Image: Large cannabis plants are one day from harvest at Blissco | Glen Korstrom) 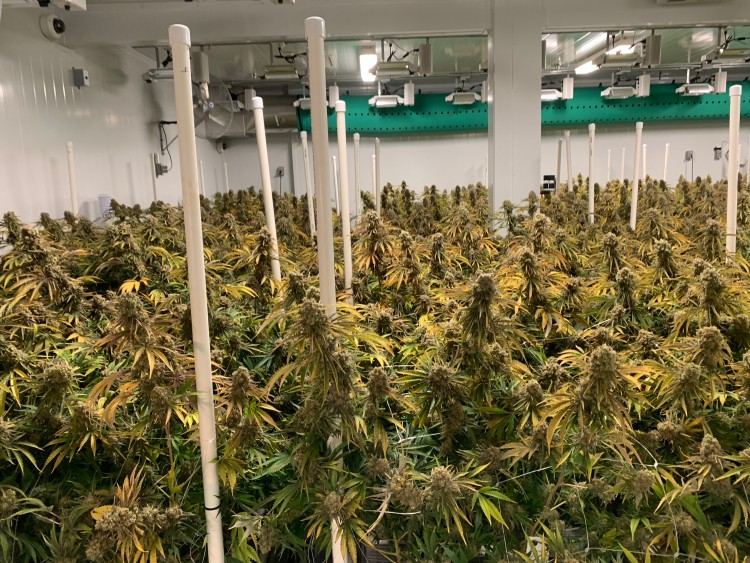 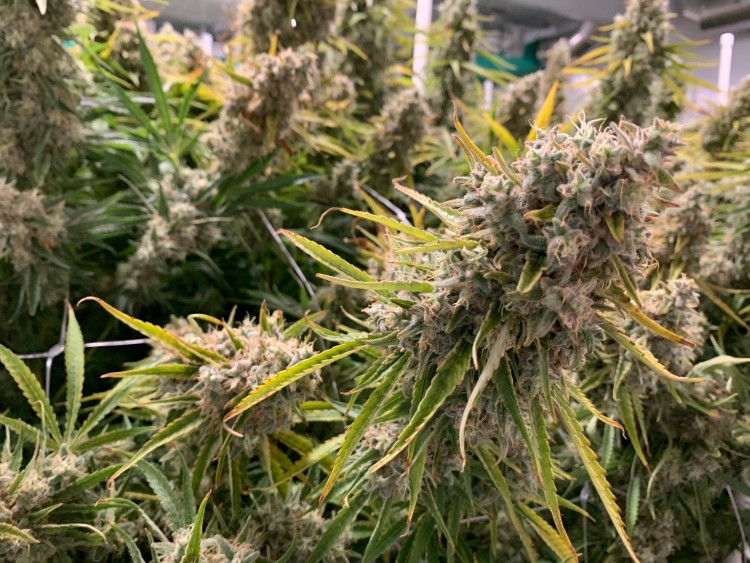 (Image: Cannabis plants at Blissco are given 24 hours of darkness before their buds are harvested as a gardening trick to prompt them to elicit more essential oil | Glen Korstrom)

Pungent aromas of cannabis waft out as soon as the door is open, and McDougall urged visitors to take photos but not touch anything.

After McDougall explained the process for fertilization he ushered the group to the company’s walk-in vault – visible past a metal-mesh wall with an entry gate with a combination lock.

When BlissCo began the process to become a licensed producer (LP), it built its vault with walls eight inches thick, including about an inch of steel, to satisfy Health Canada’s requirements.

Health Canada has since revised its requirements so LPs now need to have only what the agency calls a “secure room” – one with a buffer zone and a second entrance, but no requirement to have such thick walls, Kettlewell explained to Business in Vancouver.

The large vault houses boxes filled with product in recycled-plastic containers, dozens of plastic crates filled with large sealed bags of cannabis and tubs half filled with loose cannabis.

“Take a good whiff,” McDougall said as he opened a large blue tub containing loose bud from a strain branded Shark Shock. “What do you think? Isn’t it a nice sweet smell?” 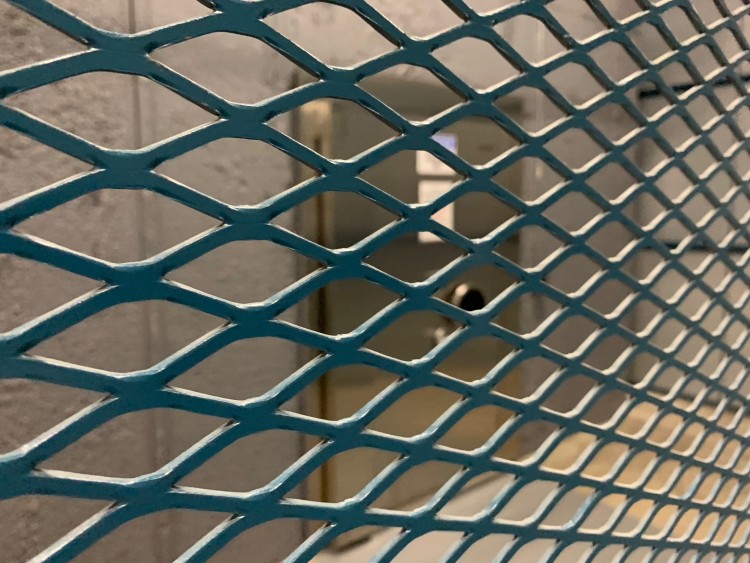 (Image: Health Canada requires all licensed producers' grow facilities to have a secure room, with a perimeter, and Blissco's secure room is a vault | Glen Korstrom) 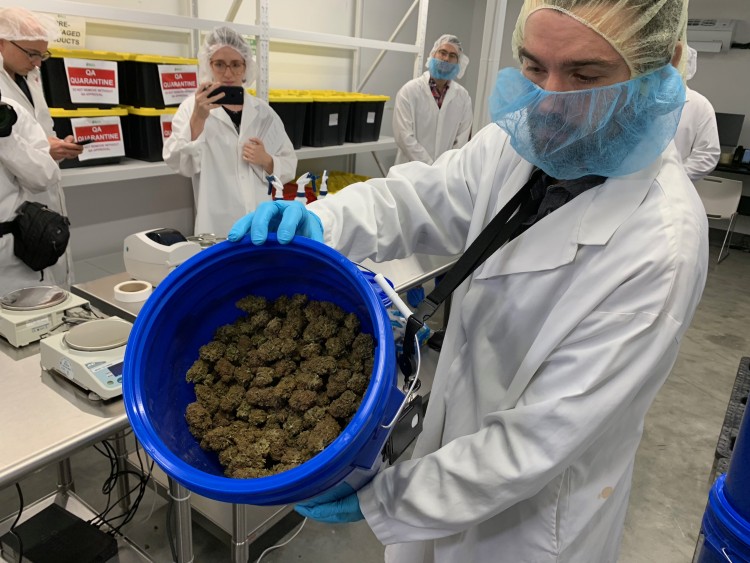 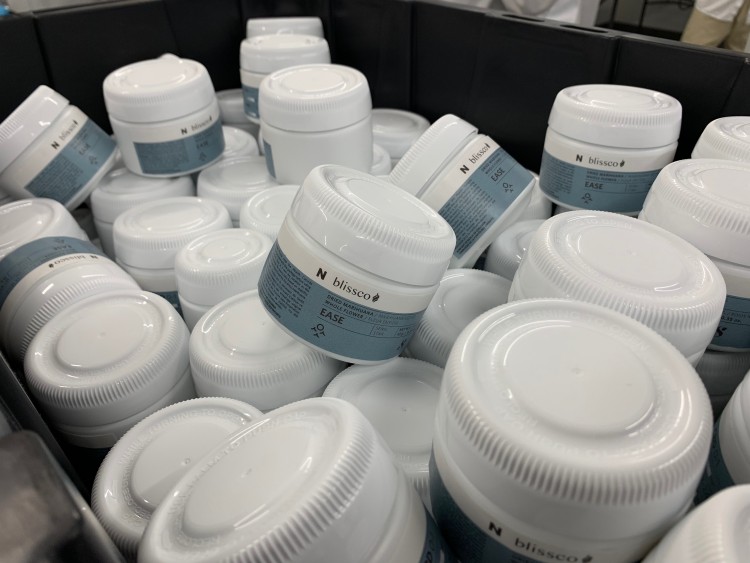 (Image: Some of Blissco's product is in small containers partly made from recycled milk jugs | Glen Korstrom) 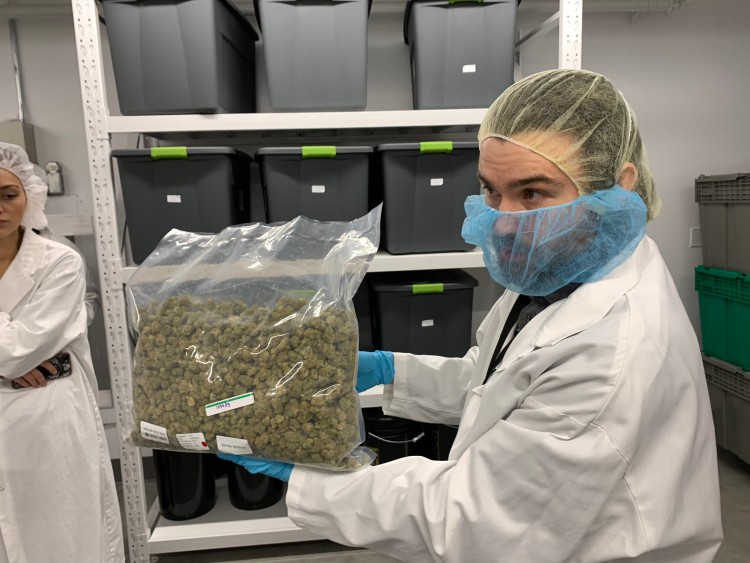 (Image: Blissco production manager Shawn McDougall displays a large bag of cannabis in a bag that is not shrink wrapped and does not contain an inert gas, as that is against regulations | Glen Korstrom)

He later displayed large bags of loose cannabis, noting that they were not shrink-wrapped because compressing cannabis damages it.

Health Canada does not authorize companies to use inert gas, such as nitrogen, in those bags, so BlissCo uses regular air, which is about 78% nitrogen, McDougall said.

“Oxygen, light and temperature are your enemies,” he added before taking the tour outside the vault to another room, where BlissCo makes cannabis oils.

The prized possession in the room is a large metal box that McDougall said was made by Vanguard Scientific Systems LLC and cost about $250,000.

The machine can hold four kilograms of dried cannabis, and it uses liquefied carbon dioxide as a solvent to separately extract terpenes – chemicals that play a central role in the taste, smell and effects of cannabis – and a mixture that McDougall called crude oil.

BlissCo uses a separate process, using ethanol, to separate fat and lipids from that crude oil to create pure cannabis oil with the full spectrum of cannabinoids. Terpenes could then be added back to that oil to create a concentrate that customers may next year be able to buy to vape.

McDougall then takes a glass container of terpenes out of a freezer, set at -20 degrees Celsius, and quickly lets visitors have a smell. Exposure to air causes the valuable terpene liquid to evaporate so he acts fast. 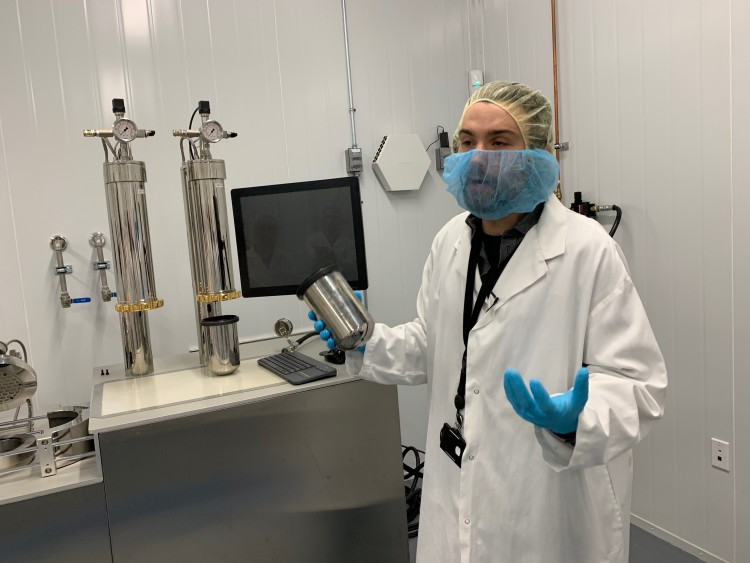 (Image: Shawn McDougall holds a canister while in front of a carbon dioxide machine that he said cost $250,000 | Glen Korstrom) 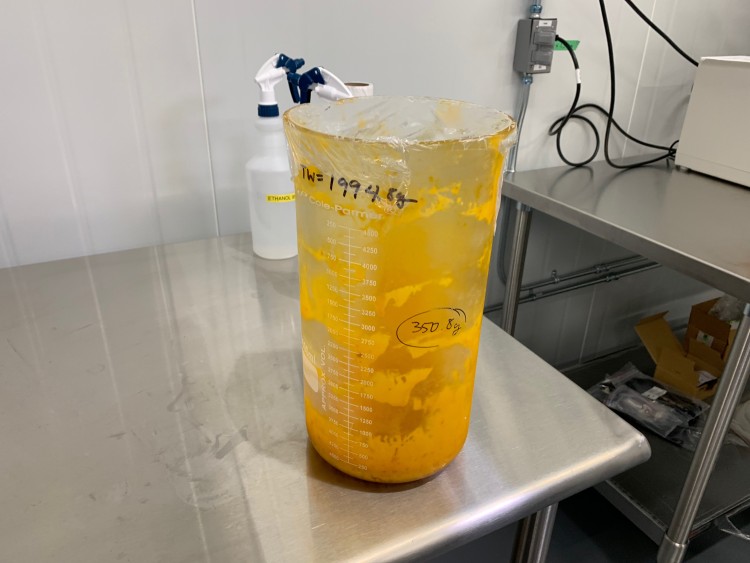 (Image: A container of cannabis crude oil sits on a counter | Glen Korstrom) 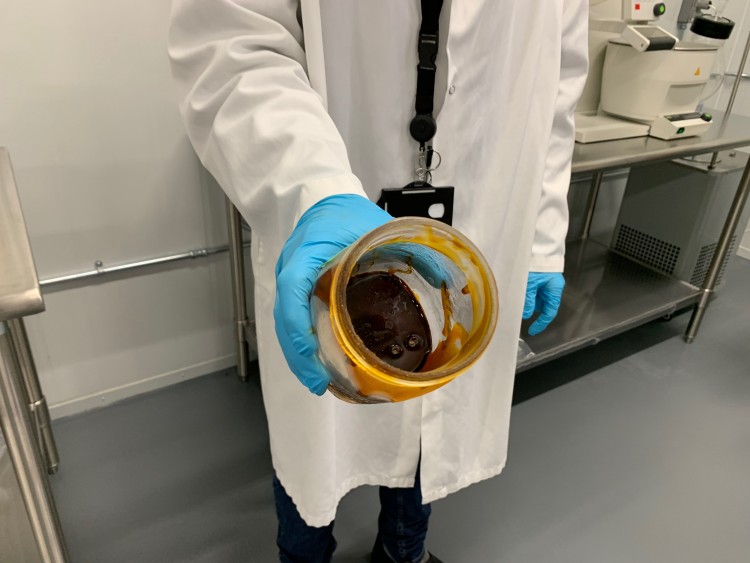 (Image: Shawn McDougall shows journalists a glass jar with a terpene liquid that has just been removed from a freezer with a temperature of -20 degrees Celsius | Glen Korstrom)

BlissCo has had two funding rounds. First was a $3.2 million round in July 2017, which included more than 100 investors and was led by Varshney Capital.

A second capital raise, in February, brought in $5.5 million, including $3 million from Supreme Cannabis Co. Inc. (TSX:FIRE). BlissCo went public on the Canadian Securities Exchange the next month.

Supreme also supplied BlissCo with six strains of cannabis seedlings, and the two companies have an agreement under which BlissCo can sell up to 3,000 kilograms of product. Only about 90 kilograms of that product is now on site, Kettlewell said.

BlissCo plans to produce about 10% of the product that it sells. The rest will come from either Supreme or a second LP partner, GreenSeal Cannabis Co.

Kettlewell expects the company to be profitable by mid-2019 and to squeeze an additional 6,000 square feet into the site by building mezzanines. He anticipates exports to launch in 2019, after BlissCo gets necessary certifications.

“Scaling up from a zero-revenue company to a multimillion-dollar company, within one year, is our biggest challenge,” said Kettlewell, “but I wouldn’t call it a problem.” •