A slow October for residential real estate sales across the province has led to an overall balanced market and a “much-needed” increase in available homes for sale, according to the latest monthly statistics from the B.C. Real Estate Association.

In total, 6,405 homes traded hands on the MLS last month, which is 26.2 per cent lower than October last year. However, that total is a jump of 14.9 per cent compared with the even slower month of September 2018, as the market picked up some fall activity.

Of the 12 B.C. real estate boards, only B.C. Northern –  which takes in the entire northern two-thirds of the province including Prince George and the booming Kitimat – posted a year-over-year increase in home sales last month.

The BCREA said that average home sale price across the province in October was $690,161. That is a decline of 4.1 per cent from October 2017, but a slight month-over-month increase of 0.6 per cent, or $4,412. Only three boards reported an annual price decline, but as one of them was Greater Vancouver, that pulled down the provincial average sale price. 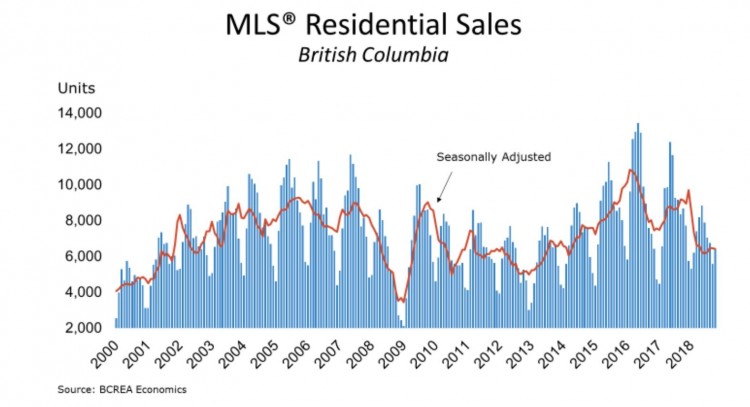 The BCREA maintained its stance that mortgage “stress testing” introduced this year was to blame for the slowdown in housing demand. “The B.C. housing market continued to grapple with tougher mortgage qualifications in October,” said Cameron Muir, BCREA’s chief economist. “However, more moderate consumer demand has led to a much-needed increase in the supply of homes for sale.”

The total number of homes listed for sale as of the end of October was up nearly 30 per cent year over year to 36,195 units. The BCREA’s report said, “While the B.C. housing market exhibited balanced conditions overall in October, market conditions do vary between regions and by product type.”

The B.C. boards still in seller’s market territory (above 20 per cent sales-to-active-listings ratios) are Vancouver Island (30.9 per cent), Victoria (29.2 per cent), Powell River (27.7 per cent), B.C. Northern (22.5 per cent) and Kamloops (21.5 per cent). At the other end of the scale, the smaller regions of South Okanagan and Northern Lights are both in overall buyer’s markets. All the other B.C. regions, including Greater Vancouver and the Fraser Valley, are currently in balanced market conditions.

However, even within those markets, conditions differ between home types – for example, detached houses in Greater Vancouver are in a buyer’s market while condos are bordering seller’s market conditions.

Despite the overall market downturn, the BCREA has issued a series of optimistic sales forecasts asserting that the market will recover over the next six months.