A typical MRI machine takes about half an hour to scan a portion of a patient’s spine  for cancer.

At the AIM Medical Imaging clinic in Vancouver, custom-engineered MRI technology is making that pace the equivalent of using a dial-up modem in the age of broadband internet.

“We’ve been able to speed up that MRI tremendously to the point where in just over an hour we can do the entire body,” said Rajpaul Attariwala, the creator of the Prenuvo scan. “With it we can detect nine of the top 10 cancers in Stage 1.”

While Attariwala is now a radiologist, he cut his teeth earning a PhD in engineering before returning to school to study medicine. A self-described “hard-core engineer,” he developed the Prenuvo scan through customized hardware and proprietary software.

“The benefit I have is I can talk as well with engineers and physicists as I can with physicians and therefore know exactly what physics technology needs to be modified to be able to be applied to the clinical realm,” Attariwala said.

The Prenuvo scanner has attracted patients ranging from Grammy winners to tech executives for radiation-free checkups.

Prenuvo was incorporated over the summer, and CEO Andrew Lacy said the company plans to start commercializing the made-in-B.C. technology in 2019.

He said MRI remains a niche business owing in part to the limited number of radiologists available to administer the scans. 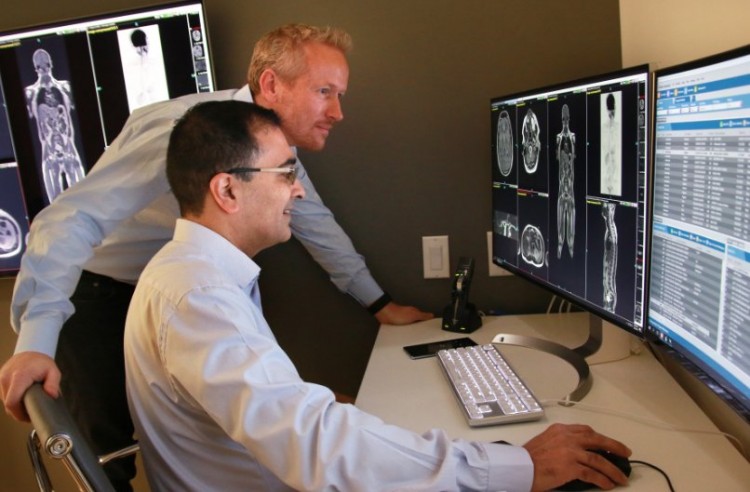 But swifter technology opens up the market to more scans, according to Lacy, a Silicon Valley veteran by way of Australia.

The company plans to begin fundraising in 2019’s first quarter and open a total of five clinics in California, New York and Finland by 2020. Meanwhile, Lacy said, Prenuvo’s benefits will be further realized as patients increase the number and regularity of their scans.

“Being able to take a very detailed snapshot using MRIs is super helpful for diagnosing conditions. But what’s even more helpful, frankly, is to see how the body changes over time because it increases the diagnostic accuracy of the [scan] itself,” he said. “This is going to pave the way, of course, for personalized, preventive health plans that are customized to each person.”

And the potential for personalized medicine is significant for B.C., according to a June 2017 report from PwC Canada. The field focuses on customized treatments for patients – often based on genetic profiling – based on their personal medical histories.

But it concluded that personalized medicine in B.C. largely remains an “unco-ordinated effort” among clinical centres, government agencies, universities and startups. The report urged the province to establish a non-profit umbrella organization to represent stakeholders in the field.

James Taylor, a director at industry association LifeSciences BC, said the region still holds a number of advantages in terms of emerging as a hub for personalized medicine. Its history in genomics science, antibody drugs and recent launch of the interdisciplinary Digital Technology Supercluster are the right ingredients for a solid ecosystem, he said. But Taylor added that challenges remain if B.C. is to compete against regions like San Francisco or Boston.

“The world is seeing these mega-trends of certain areas gaining more and more resources including talent and capital,” said Taylor, who is also CEO of Vancouver-based Precision NanoSystems Inc.

He said the region shouldn’t expect to unseat a city like San Francisco, but it can still capitalize on inherent strengths such as a solid positioning to participate in Asian markets.

Meanwhile, local advances in personalized medicine are also attracting support from notable names in business and technology from outside the province.The Paul G. Allen Frontiers Group, named for the late co-founder of Microsoft Corp. (Nasdaq:MSFT), made a US$1.5 million grant in October to Dr. Christian Steidl to fund his lymphoid cancer research. Steidl, research director at the BC Cancer Centre’s Centre for Lymphoid Cancer, is focused on merging cancer genome sequencing with cancer imaging, a field that he hopes will lead to more precise diagnostic tools and treatments.

“You can really think about it as unique funding to bridge two fields that stand on their own,” he told Business in Vancouver in October. “Now we have the opportunity to give it the boost that we need to really elevate it to the next level – and not only doing incremental research, but doing a quantum leap with what we are proposing.”

The economic potential is also expanding into manufacturing and other sectors of B.C.’s economy. Vanrx Pharmasystems Inc. specializes in robotic technology for the manufacturing of injectable drugs, replacing outdated filling equipment in the pharmaceutical industry. It’s grown from six workers in 2013 to a staff of 70 as of 2018.