DFO taking more measures to protect orcas, but no endangered listing for Chinook yet

New critical habitat protection areas are being created around Vancouver to protect both the southern and northern resident killer whales.

Fisheries and Oceans Canada Minister Jonathan Wilkinson announced the new measures Wednesday December 19 in Vancouver. The new conservation areas are being created under the Species At Risk Act, which designates the Southern Resident killer whale (SRKW) as endangered.

The new conservation areas are being created around points known as Swiftsure and Le Perouse on Southern Vancouver Island, and western Dixon Entrance. In total, this creates a total critical habitat area 6,419 square kilometres in size.

As for specific measures, like fishing restrictions, those will be worked out later through stakeholder consultations.

"Such measures could include additional restrictions on fisheries and the creation of whale sanctuaries, which would require additional on transportation and other sectors," Wilkinson said.

The federal government has already gotten push-back from coastal communities for the measures implement earlier in the year.

Some of the measures already taken include requirements that move marine traffic away from key orca foraging areas, voluntary vessel speed limits, and requiring whale watching and recreational vessels to stay at least 200 metres away from feeding orcas. The federal government has also increased funding for research on ocean contaminants.

One measure DFO is not yet taking, however, is an official designation of certain Chinook populations as endangered.

The Committee on the Status of Endangered Wildlife in Canada (COSEWIC) listed eight of 16 B.C. Despite the importance of Chinook to killer whales, DFO has not yet acted on that listing with an official designation under the Species At Risk Act.

Although he said the federal government usually does follow the recommendations of COSEWIC, it’s not clear if that will happen with Chinook.

Wilkinson pointed out climate change may be one of the factors affecting Chinook populations, in which case there isn’t much the federal government can do about that through a listing, other than invest in habitat restoration and hatchery enhancements, which it is doing.

The Canadian and Washington State governments have announced more than $1 billion in funding to address a decline on the SRKW. Washington recently announced US$1 billion in conservation measures, and the federal government has earmarked $167 million for the Whales Initiative and another $61.5 million specifically for SRKW.

DFO has identified three main causes of the decline: declining abundance and size of Chinook salmon, noise from boats and ships and ocean contaminants.

Andrew Trites, a marine mammal expert at the University of BC, has pointed out that populations of SRKW are cyclical. The SRKW population is now down to 74 animals, which is lower than the mid-1990s, but not as low as they have been in the past.

And the Northern Resident Killer Whale population, which overlaps with the SRKW territory, have grown in number to about 300. Trites has said he thinks the plight of the southern orcas may have more to do with competition with their northern cousins than the availability of Chinook. 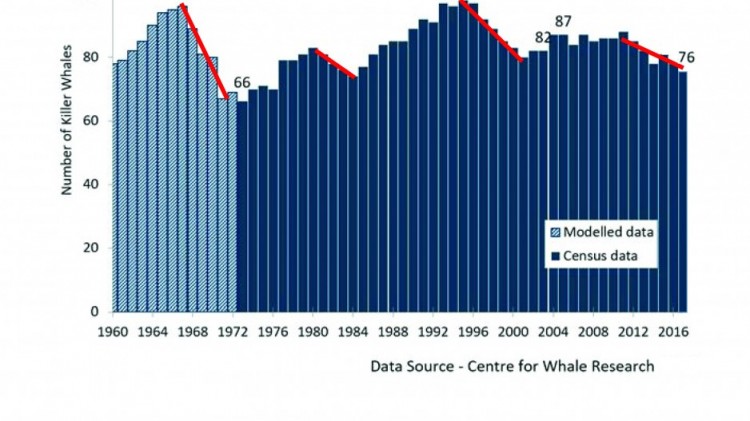