By Cecilia Jamasmie, Mining.com | December 4, 2018, 3:16pm
Quebrada Blanca open pit mine is nearing the end of its life, but an expansion would keep it producing for at least another 25 years | Image courtesy of Teck Chile.

Teck Resources (TSX:TECK.A,TECK.B)(NYSE:TCK), Canada’s largest diversified miner, has chosen Japan’s Sumitomo as partner to go ahead with a planned $4.8 billion expansion of the Quebrada Blanca copper mine in northern Chile.

The sum will help the Vancouver-based company go ahead with the expansion of the mine, now approved by the board, with construction to start as soon as the deal is closed and production expected to begin in the second half of 2021.

“This partnership significantly de-risks Teck’s investment in the project, enhances our project economics and preserves our ability to continue to return capital to shareholders and reduce bonds currently outstanding,” Teck’s Chief Executive Don Lindsay said in the statement.

In August, the miner received regulatory approval for the mine extension, but the board didn’t ok the project until today.

Teck sees the Quebrada Blanca Phase 2 as its most significant growth opportunity, with the potential to double its copper business. It is expected to extend the ageing deposit’s life by 28 years and substantially boost production to 300,000 tonnes of copper a year from 23,400 tonnes in 2017.

The Canadian mining giant is already studying a Phase 3 for the mine, which will double its capacity to 600,000 tonnes of copper a year. The potential extension will make the mine Chile’s second largest copper operation, after Escondida, and situate it among the world’s top five copper mines.

In terms of costs, Phase 3 would need a $5 billion-investment, as it would have to include the installation of a new concentrator.

Copper, one of four business units at Teck besides steelmaking, coal, oil and zinc, is considered a company priority.

The Canadian miner is not alone on the quest for copper assets, a metal the industry sees as having one of the strongest outlooks. There are expectations that the electric-vehicle boom and demand for renewable energy will increase need for the metal.

The expected deficit will partly be a consequence of increasing demand for power generation and electric vehicles (there’s 300kg of copper in an electric bus and nine tonnes per windfarm megawatt). 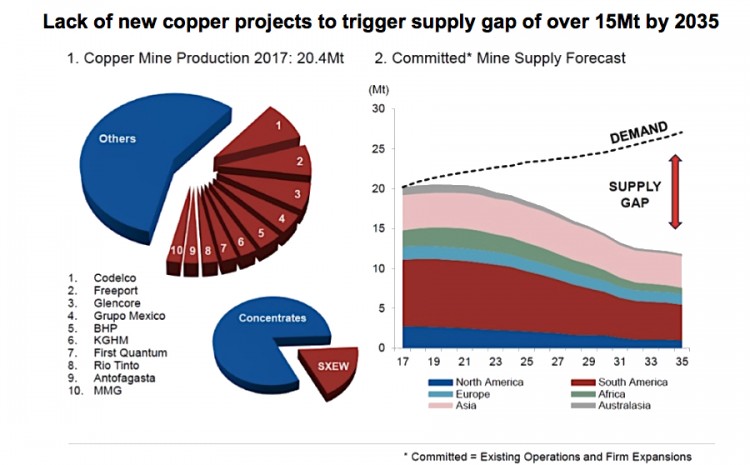 But it’s also related to the fact that the current copper pipeline is at the lowest this century, both in terms of number and capacity.

“After delivery of Cobre Panama (with the main ramp early next year) we are left with a gap until we see the next batch of 200ktpa-plus projects in 2022-23,” Colin Hamilton, director of commodities research at BMO Capital Markets, said in April. “This is when the likes of Kamoa, Oyu Tolgoi Phase 2, and QB2 are likely to offer meaningful supply growth.”

Once the deal with Sumitomo is completed, Teck will own 60% of the Quebrada Blanca project and Chile’s national mining company ENAMI will hold the remaining 10%.