But it adds that the rapid adoption of unconventional oil and gas extraction in B.C., and a lack of data makes it difficult to quantify the risks, which include mini-earthquakes, fugitive methane emissions and water use.

“It is the view of the panel that the current regulations under many acts appear to be robust… however, insufficient evidence was provided to the panel to assess the degree of compliance and enforcement of regulations," the report states.

The three-member panel makes 97 recommendations for improving the regulatory regime.

“The lack of data on the impacts to human health, environmental health, cumulative impacts and the increasing number of seismic events associated with horizontal fracking all point towards the need for a more cautious approach,” said Sonia Furstenau, the Green Party’s caucus spokesperson for the environment.

“It shows a lack of due diligence for government to continue with their LNG plans, which will inevitably bring more fracking, without evidence to address these concerns. B.C. Green caucus will continue to oppose LNG or any further investment in the fossil fuel industry, which undermines CleanBC’s emission goals, is harmful to people and the environment, and takes us further from an economy based on an innovative industry and workforce.” 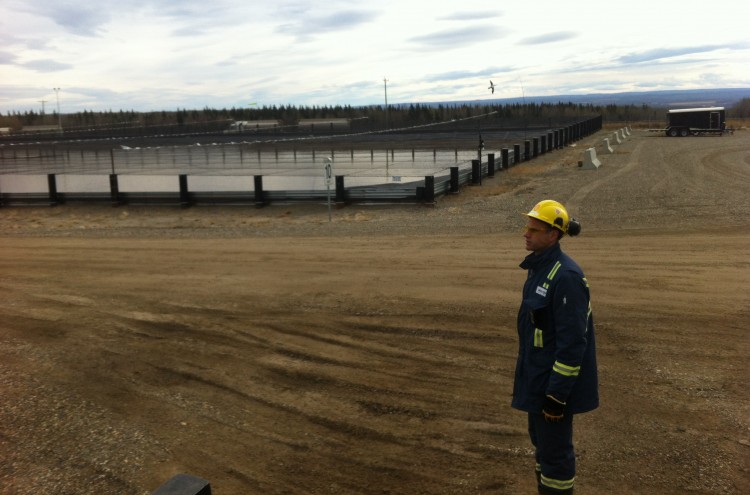 This holding pond at Shell's Groundbirch operation in northeastern BC allows for 100% recycling of water used in fracking. | Nelson Bennett Photo

The three-member scientific panel was struck by the NDP government to address concerns about B.C.'s natural gas industry.

Even without increased demand for natural gas from a nascent LNG industry, the Montney play in B.C.’s northeast has been a hotbed of investment and activity, due to its high concentration of natural gas liquids, which includes oil and condensate.

The development of the Montney play has resulted in concerns over things like induced seismicity (mini-earthquakes), use of fresh water, fugitive methane emissions and impacts on ground water.

The Ministry of Energy, Mines and Petroleum Resources, which ordered the review, says that it has already implemented changes that address some of the concerns raised in the report, including to legislation to address the problem of abandoned and orphan wells, and new regulations for permitting the storage dams used in hydraulic fracking.

The science panel points to a dramatic shift in drilling methods in B.C. in the last decade. Whereas 85% of wells drilling in northeastern B.C. in 2007 were conventional vertical wells, by 2016, 98% of the producing wells were drilled using horizontal drilling and hydraulic fracturing.

“The very rapid development of shale gas in NEBC has made it difficult to assure that risks are being adequately managed at every step,” the panel notes.

There are environmental pluses and minuses with unconventional gas oil and gas extraction. On the plus side, horizontal drilling takes up a much smaller footprint. Multiple wells can be drilled from a single well pad. 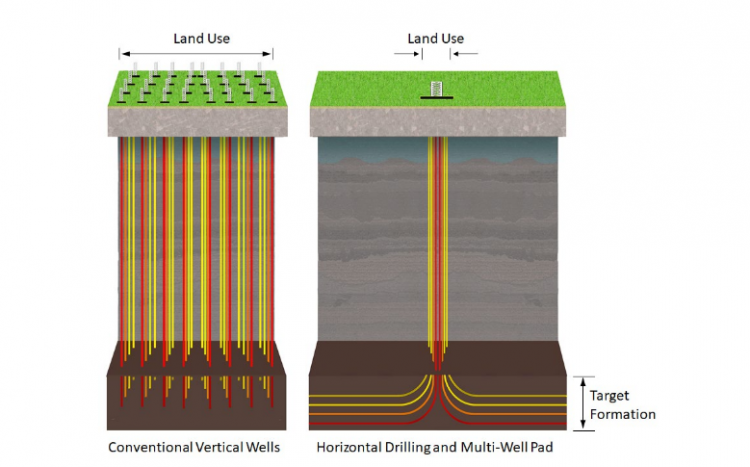 Multiple well pads in unconventional drilling has a smaller footprint.

On the other hand, the increased use of fracking can trigger minor earthquakes, most of which are not significant enough to cause any damage to buildings.

One study cited by the panel found that 62% of earthquakes in the Western Canada Sedimentary Basin between 2010 and 2015 were induced by hydraulic fracturing, 31% by wastewater disposal. Most are not big enough to cause any structural damage.

There are also concerns about increased methane emissions, although it appears that that is more of a concern with shallower wells, whereas the ones drilled in B.C. tend to be at much greater depths.

“Shallow wellbores are seen to increase the potential for gas migration pathways to develop through and around the wellbore cement contributing to fugitive gas escape,” the panel notes, whereas “hydraulic fracturing activities in NEBC are particularly deep.”

One major concern associated with unconventional oil and gas is the amount of fresh water they use.

Water is used in the fracking process, along with proppants (a mix of sand and chemicals).

The mixture is injected underground at high pressure to fracture porous shale, thereby liberating oil and gas, which then flows back to the surface.

“The rapid development of the industry and use of hydraulic fracturing saw the use of unprecedented amounts of freshwater, and after, wastewater disposal,” the panel says.

“However, pressures caused by this need for freshwater has led to research successes in the recycling of wastewater for hydraulic fracturing, which has quickly, and significantly, reduced fresh water needs.

“This one advancement presents a significant step-change in reducing key concerns regarding water quantity.”

Shell’s Groundbirch operation, for example, uses 100% recycled water. The BC Oil and Gas Commission estimates that 40% of all water used in fracking now is recycled.

The panel raise concerns about an increase in “legacy sites” should there be a downturn in oil and gas development. The concern is that the government will be left with abandoned wells.

“Legacy site cleanup could become a significant financial burden to the people of BC,” the panel warns.

The B.C. government recently passed new regulations to deal with the issue of dormant and orphan wells.