Non-residents own 4.9% of Metro Vancouver homes, much higher in new condos: CMHC

While there is a common perception that overseas buyers have snapped up much of Metro Vancouver real estate, the number of homes owned purely by non-residents across the region is 4.9%, according to a study of Statistics Canada data by Canada Mortgage and Housing Corporation (CMHC), published March 12.

Including homes that are jointly owned by a mix of residents of Canada and non-residents – such as a satellite family where one spouse is resident in Canada, or a local student who jointly owns a home with their overseas parents – adds another 2.9%. This brings the total proportion of Metro Vancouver homes with some “non-resident participation” to 7.6%, said CMHC.

However, the proportion of non-resident ownership varies dramatically when broken out by property type and by year of construction.

Just 3.2% of Metro Vancouver’s single-family homes were owned entirely by foreign nationals, while an additional 2.5% of detached houses were jointly owned by a mix of residents and non-residents.

This compares with condos, where 8.3% were found to be owned entirely by overseas residents, and a further 2.9% by a mix of Canadian residents and non-residents. This brings the total share of Metro Vancouver condos with some “non-resident participation” to 11.2%. 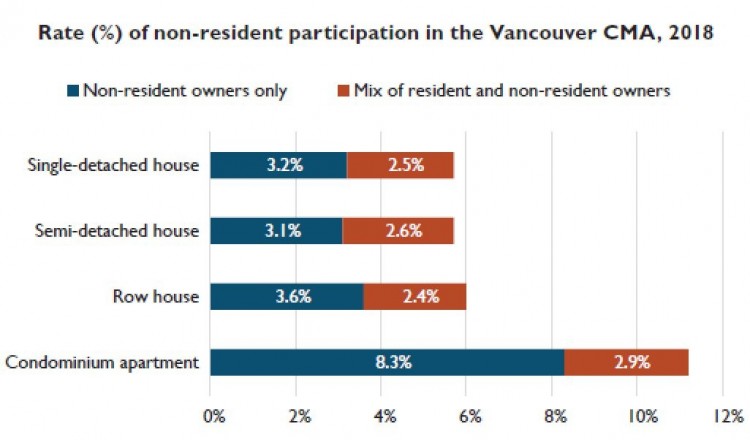 The share of the region’s condos owned purely by overseas residents was found to increase dramatically among newer units, rising to a peak of 15.6% in condos built in the frenzied 2016/2017 market. An additional 3.6% of those 2016/17-constructed condos are jointly owned by a mix of Canadians and overseas nationals.

This means slightly fewer than one in five Metro Vancouver condos built during this two-year market peak was purchased by at least one overseas buyer. 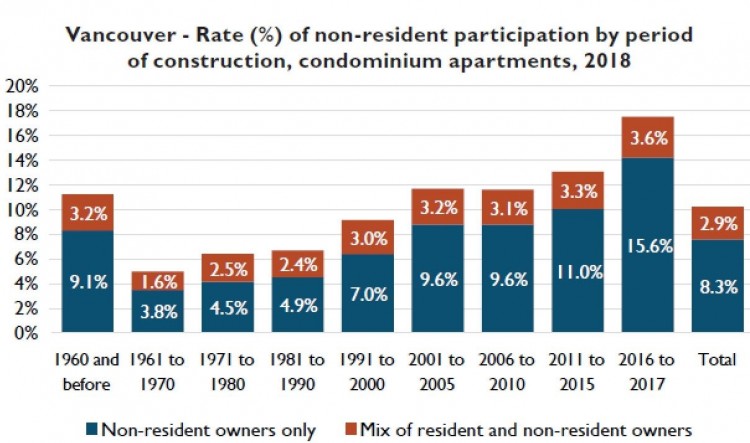 The largest assessed value difference between non-resident and resident-owned detached houses is $1,580,000 (31.2%) in the Metro Vancouver Electoral Area A, which includes UBC and the University Endowment Lands. Vancouver proper saw the second highest value difference, with the median non-resident-owned detached house valued at $1.1 million more than those owned by Canadian residents (22.3% higher).

The non-resident-owned median assessment value of a single-detached house in British Columbia was $236,000, or 36.7%, higher than the median-valued resident-owned property in B.C.

Aled ab Iorwerth, deputy chief economist at CMHC, said, "The data allows us to better understand the role of non-residents as a component of demand in Canadian housing markets, a topic that is of public interest in terms of the source of funds and the investment behaviour associated with such properties.”