The last row of “mom and pop” shops along Vancouver’s famous Robson Street will be closing its doors this summer, and in doing so, will mark the end of an independent retail era.

Between Granville and Seymour Streets, on Robson’s south side, you’ll find a one-storey 1914 building that still houses Simon’s Bike Shop, India Gate Restaurant and Time Frame Gallery. All three independent businesses have been in their current locations for more than 30 years. Newer tenants on the block include Red Burrito and Vancity Weed.

Recently, they were all served eviction notices for July 31, 2019, citing a demolition clause in their lease agreements.

Simon Coutts has owned and operated Simon’s Bike Shop at 608 Robson St. for an amazing 33 years, opening in 1986. He is one of downtown Vancouver’s last standing true retail characters, always shooting from the hip and quick with a story or a quip. He loves to talk.

Some of his customers over the years have included Robin Williams, Matthew Broderick and Pierce Brosnan. Coutts could apparently match wits with all of them.

He isn’t surprised at being served notice and, even though the development application has yet to be approved by the city, Coutts considers it a done deal.

“It’s going to happen,” Coutts told me from his perch behind the counter of the bike shop. “It only makes sense. This is an old building. Progress happens, and this property is worth so much money.”

The property at 600 Robson was assessed at $28.7 million in 2018, more than three times its assessed value in 2015, according to BC Assessment. The shopkeepers say the land is rumoured to have sold for almost double the accessed value. 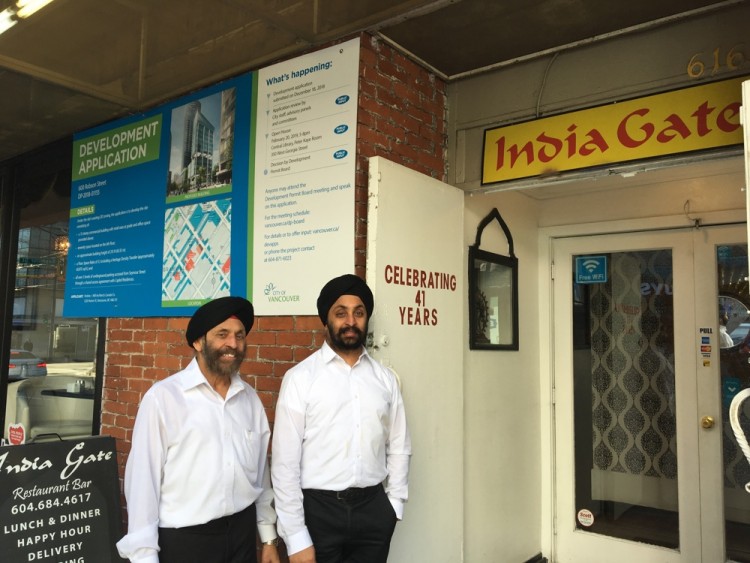 The Gupta family says they’ll likely close the doors on India Gate for good after four decades in the neighbourhood | Photo: Grant Lawrence

A few doors down from Simon’s Bike Shop, the family-owned India Gate Restaurant has been serving the theatre, concert and downtown business crowds for a remarkable 41 years. The Gupta family opened their doors on Feb. 1, 1978. They were informed of their upcoming 2019 renoviction by mail.

Gupta’s father, the charming Rachhpal Gupta, opened the restaurant with his wife after moving here from India. At 74, he still works the lunch rush alongside his son.

“This is our second home,” Gupta senior told me with a warm smile. “The rent has always been reasonable here.”

Longtime property owner Murray Goldman recently sold the 600 block of Robson to Bonnis Properties, which plans to build a 13-storey office tower on the site, with roughly half the retail space along Robson Street there currently is now. 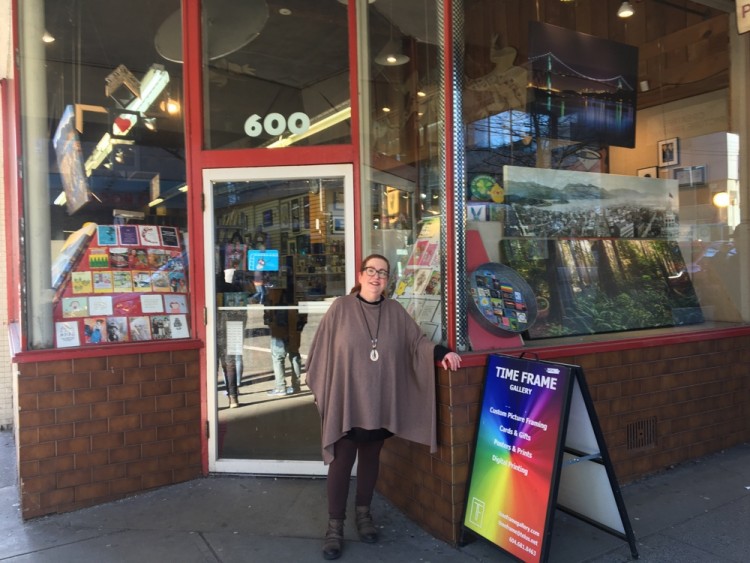 Time Frame Gallery opened on the corner of Robson and Seymour in 1977, making it the oldest shop on the block. New owner Christie Scott bought the business less than two years ago, and had no idea then the building would be sold shortly after she signed a three-year lease | Photo: Grant Lawrence

Time Frame Gallery first opened its doors on the corner of Robson and Seymour in 1977, making it the oldest shop on the block. New owner Christie Scott bought the business less than two years ago, and had no idea then that the building would be sold shortly after she signed a three-year lease.

“As the new owner, I barely got up and running. Now I have the added challenge of moving this whole thing.”

“We have to sell a lot of greeting cards and picture frames to make that, let alone pay the staff,” Scott told me with a sigh.

I asked all three business owners if they expected to be given first right of refusal for the new retail spaces that comes with the tower.

“I have not been offered anything,” Scott told me. “They couldn’t care less, I don’t think. Apparently longevity — this shop being here for over 40 years — doesn’t count for much. This corner will probably become a Starbucks under another tower.”

Coutts agreed, and suggested the rent they all pay now is far better than even directly across the street at newly opened eateries such as Meat and Bread.

“They’re probably paying double what we are,” Coutts said.

Bonnis Properties was contacted for comment, but did not respond by deadline.

The Guptas remember a time when Robson Street was filled with interesting little shops for blocks. Further along Robson, before it became a fashion district, the area was known as Robsonstrasse, a primarily European neighbourhood filled with schnitzel houses, delis, bakeries, international magazine shops, and independent bookstores.

“With us leaving, everything on Robson will be corporate or a chain,” Gupta junior told me. “With new towers come much higher rents. But there’s never been so many empty store fronts along Robson, especially in the fashion district, and they’re the ones who should be able to afford it.”

Once evicted, the Guptas say they’ll likely close the doors on India Gate for good after four successful decades in the neighbourhood. Coutts and Scott hope to find new locations. Scott has scouted Davie Street for Time Frame Gallery, aiming for a smaller space. Coutts has his eye on Library Square. Both feel it’s important to stay in the downtown core, as challenging as that may be in 2019.

“Alright, yes, it is a bit sad to be leaving,” Coutts eventually admitted. “I’ve been here for so long, and I’m the last bike shop in the downtown core. But I’ll negotiate, I’ll relocate, and I’ll still be downtown. I’ll be OK. I’ve sold bikes for a living to all walks of life for over 30 years. It’s an enjoyable thing to do. Do I look stressed to you?”

For more stories from the Vancouver Courier, visit www.vancourier.com.