Can B.C. employers and workers mix with 996?

By Tyler Orton | April 30, 2019, 8:00am
Clear HR Consulting Inc. principal Cissy Pau: “I just came from a meeting with a client this morning and they said, ‘Look, we have eight job postings. We don’t have those people and there’s work to be done. What do we do?’” | Photo: Chung Chow

The employer argued it didn’t have to pay overtime to the animators since it considered them “high-technology professionals” exempt from certain overtime provisions under the province’s Employment Standards Act (ESA).

The Employment Standards Branch didn’t accept the argument, saying if that were the case, any employee who used a phone or a computer might as well be classified as a tech worker.

But Clear HR Consulting Inc. principal Cissy Pau said the 996 debate exposes a conundrum facing the province with the country’s lowest unemployment rate (4.7% in March, according to Statistics Canada).

Companies are under increased pressure to squeeze more hours out of workers if they can’t hire as many people as they need, but she said in a tight tech labour market like this, workers know they can jump ship and easily find work at another firm.

“I just came from a meeting with a client this morning and they said, ‘Look, we have eight job postings,’” Pau said. “‘We don’t have those people and there’s work to be done. What do we do?’”

Pau added that other clients have been exploring the ESA’s high-tech worker exemption.

David Gens, CEO of Vancouver-based Merchant Advance Capital, said his industry is feeling a lot of tightness in the market for talent, but retention is even more critical right now.

“If you push your people too hard, that can be an issue,” said Gens, whose tech company specializes in offering small businesses loans and lines of credit over the internet. “But if you have a compelling vision for your company and you have a team that’s really bought into that, A-players will really dedicate and put the time in.”

While Pau doesn’t believe 996 “would fly on any long-term basis,” it’s not impossible B.C. will find itself marching down a path in that direction.

“Every culture is different and has qualitative factors that are more important to them than other cultures,” said Progressa CEO Ali Pourdad, whose Vancouver-based financial technology company specializes in lending capital to non-prime consumers. “I think in Vancouver we have the luxury of a nice lifestyle here. It would be pretty hard to penetrate that – although if this ever became a global phenomenon, you have to think sometimes the money speaks. It’s happened before. A lot of large companies just move to where they make more money.”

And from a legal perspective, implementing some form of 996 in B.C. might not be entirely outlandish.

“The exemption for the high-tech workers doesn’t exempt them from the prohibition on excessive hours,” said Boughton Law employment lawyer Elizabeth Reid.

But she added that the province doesn’t have a standard definition of what constitutes excessive hours.

“It’s very contextual,” she said, adding the Employment Standards Branch would have to examine factors such as the nature of a worker’s responsibilities or an emergency situation that called for significant overtime across a short period.

“I haven’t seen any cases that are similar to [996 in B.C.]. But put it this way: I think it would raise some eyebrows at the Employment Standards Branch.”

Reid said employers can protect themselves by documenting the number of hours workers put in, but she acknowledged that task has become increasingly difficult as more employees telecommute or else answer emails when they return home from a day at the office.

“They can’t just turn a blind eye if they become aware a worker is really working excessive hours,” she said.

Despite the legal wiggle room, Reid said she’s certain “there would be a revolt” if companies tried implementing 996 in B.C.

Even in China, where the 996 phenomenon originated, the 72-hour workweek has come under increased criticism from employees complaining of health problems caused by excessive work.

While other tech executives in China beyond Ma have defended 996, 2015 data from the Organization for Economic Co-operation and Development (OECD) doesn’t support a correlation between hours worked and productivity.

Luxembourg ranked as the OECD’s most productive country, while part-time and full-time workers spent an average of 29 hours per week on the job.

Mexican workers ranked last in terms of productivity, despite working more hours on average than any other OECD country at 41.2 hours per week.

Part-time and full-time workers in Germany spent fewer hours (26.3 per week) working than in any other OECD country; however, the country ranked No. 8 for productivity.

Canada ranked in the middle at No. 18, while workers put in an average of 32.8 hours of work per week.

And while B.C. carries with it a reputation of being a more laid-back province, newer data from Statistics Canada shows that in 2018 full-time workers averaged 40.2 hours per week on the job.

That’s the exact same number as the national average for hours worked – above Quebec but below Alberta.

B.C., meanwhile, has been one of the top-performing economies throughout most of the 2010s.

But if 996 did take off in Vancouver’s tech ecosystem, Gens is positive he would find himself drained.

“I’m not capable of making high-quality decisions or doing high-quality work after a certain [number of hours] a day,” he said. “I personally don’t believe in working all day, every day, because for most people you’re really not going to get that much more out of them by adding all those hours.” 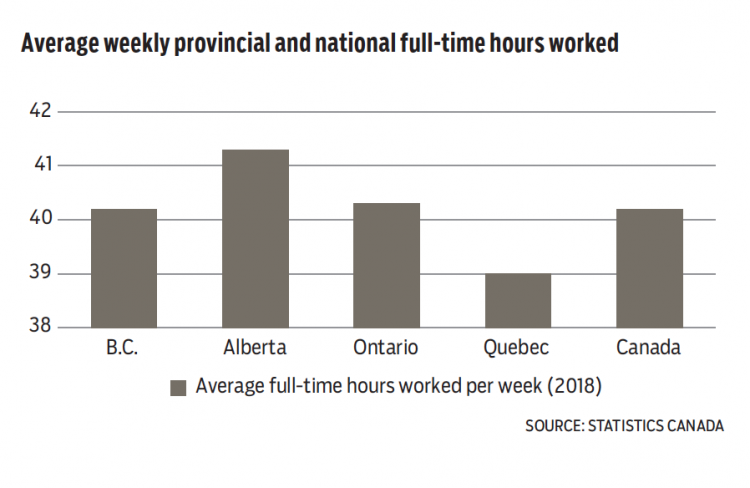