Gas pains on road to green gains in B.C.

Special report | B.C., California pay the highest gas prices on continent in part because they have chosen to be climate change leaders

Last week, Vancouver once again earned the dubious distinction of breaking a North American record for high gasoline prices, when they hit $1.65 per litre here.

South of the border, California earned a similar distinction. It has the highest gasoline prices in the U.S.

It is no coincidence that both regions also share the distinction of being leaders in climate change policies, including carbon pricing and low-carbon fuel standards, both of which contribute to higher gas prices.

They also share similar refining and pipeline constraints, however. That, too, has a big effect on gas prices.

The spike happened to coincide with a $0.01 increase in B.C.’s carbon tax, much to Premier John Horgan’s annoyance.

“Why is it that gas prices went up $0.12 overnight?” he asked last week during a scrum with reporters. “And why is it that that’s happening earlier and earlier in the year?”

While the simplest explanation for high gas prices is price gouging in a captive market – something Horgan seemed to suggest last week – B.C.’s record-breaking gas prices are the result of “a perfect storm of issues,” according to one petroleum industry analyst.

Those issues include high taxes, a seasonal turnaround for refineries – and outages of West Coast refineries – a low-carbon fuel standard and a general lack of refining and pipeline capacity.

“You’ve got a situation, particularly in the Lower Mainland of B.C., where there’s more consumption of fuel there than there is domestic supply,” said Jason Parent, vice-president of the Kent Group.

B.C. also has some of the highest fuel taxes in Canada.

“The Lower Mainland of B.C. has the highest prices in North America. That is primarily tax-driven,” Parent said.

However, taxes alone can’t explain B.C.’s high gas prices. Montreal’s taxes on gasoline are actually slightly higher than Vancouver’s, but gas prices last week were about $0.25 lower there than in Vancouver.

Montreal has even slightly higher fuel taxes than Vancouver, which has much higher gas prices. | GasBuddy

In addition to the $0.01 hike in carbon taxes on April 1, the TransLink levy also goes up by a penny on July 1. When GST is added, the total tax increase per litre of gasoline this year will be $0.03.

In California, which has the highest gas prices in the continental U.S., prices were approaching US$4 per gallon: about $1.04 per litre in San Francisco.

California has seen gas prices skyrocket as much as US$0.53 per gallon over a one-month period. That spike is largely due to refinery outages.

Both B.C. and California are victims of refining and pipeline capacity constraints. And both have low-carbon fuel standards and comparatively high carbon prices, all of which add to the price of gasoline.

California and B.C. pay the highest gasoline prices in their respective countries, in no small part, because they are North America’s leaders when it comes to climate change policies.

Politicians haven’t done a very good job of explaining that, however, choosing instead to blame refiners and gas station owners for price gouging.

“The reality of the case is that high gas prices are a feature of the system not a bug,” said Blair King, who blogs about energy issues. “The reason we have carbon taxes is to increase the price of carbon-intensive fuels to discourage their use and encourage users to seek alternatives, be they EVs, transit, walking or avoided trips. If our political leaders were honest they would make this clear and sell it as a point of pride not a point to be hidden.”

These seasonal switches can be exacerbated if refiners shut down for seasonal maintenance, which is what has happened this spring – with two refiners in Washington state going down temporarily, according to Dan McTeague, an analyst for GasBuddy.

This year’s seasonal uptick in gasoline prices happened to coincide with B.C.’s annual carbon tax hike on April 1, bringing it to $0.09 per litre – double what other provinces are paying under the new federal carbon tax.

“The price of the commodity – a barrel of oil – is still around $60. But yet there was a $0.12 increase at the pumps. So that’s not a taxation question. That’s a question of profit-taking or undersupply – whatever the industry will argue, I’ll leave it to them to make their case.”

The petroleum industry, it appears, isn’t interested in explaining to the public how it operates or defending itself against suggestions it is deliberately gouging consumers.

Price fixing has occurred in Canada in the past, when retailers conspired to push prices up.

“This is always at the local level,” said Werner Antweiler, associate professor at the University of British Columbia’s Sauder School of Business. “It’s basically a group of gas stations, where they try to increase their retail margin. So it’s not the oil companies.”

But according to a study conducted last year by Navius Research Inc. for Advanced Biofuels Canada, a lack of competition may indeed be resulting in price gouging in B.C.

Researcher Michael Wolinetz said margins for refiners in the Pacific Northwest and Alberta are much higher than elsewhere. His report says an “oligopoly” of just four companies supplies 80% to 90% of the fuel to B.C. and that the companies may “tacitly co-operate” to generate higher profits.

“We’ve looked at all the obvious explanations for higher prices, including taxes, and none of them explain it,” Wolinetz said. “The taxes are applied after the wholesale price, and it’s the wholesale price we can’t explain. When you see really high refining margins compared to other regions, it indicates that they most likely have a higher profit margin.”

In other words, refiners supplying the B.C. market are simply taking advantage of a captive market to take more profits.

But analysts who study the petroleum industry don’t buy the idea that refiners are deliberately targeting B.C. consumers. They say the reason gasoline prices are so high in B.C. is simply because of higher taxes, tight refining capacity and lack of pipeline capacity.

The entire Pacific coast, from California to Washington – known in the industry as PADD 5 – has only one pipeline, the Trans Mountain. About 50% of the oil that moves on that pipeline flows to Washington state, which has five refineries.

Because of lack of pipeline and rail access, whenever there are refining outages, the price spikes are more pronounced in the PADD 5 region than in other parts of North America, which have more options for buying gasoline from other suppliers.

Every spring, gasoline prices tend to rise, as refiners switch their fuel mix from winter to summer blends. The composition of the gas and diesel is changed to reduce the volatility of gas under higher temperatures, McTeague explained.

That’s why prices tend to go up in the summer and down in the winter. It is less expensive to refine winter fuels. Also, the demand for fuel increases in the summer. This seasonal switch has been compounded this year by maintenance shutdowns at two refineries in Washington, McTeague said. So supplies, and prices, should ease up somewhat when they are back online.

Alberta has plenty of refining capacity and already supplies about half of the fuels B.C. consumes, but there is little room on the existing Trans Mountain pipeline to increase the supply of refined fuels to B.C. from Alberta.

“The problem with Trans Mountain is it’s been basically under-apportioned – meaning it’s full – for the past three, four years,” Parent said. “You can’t send any more fuel down than is already coming down that.” 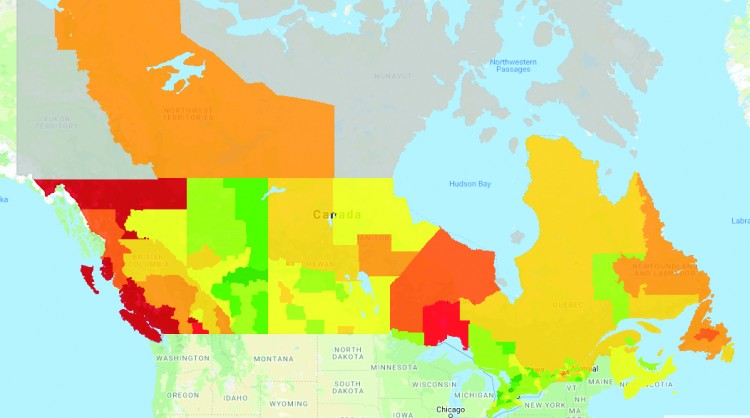 Heat map shows B.C. has some of the highest gas prices in Canada. | GasBuddy 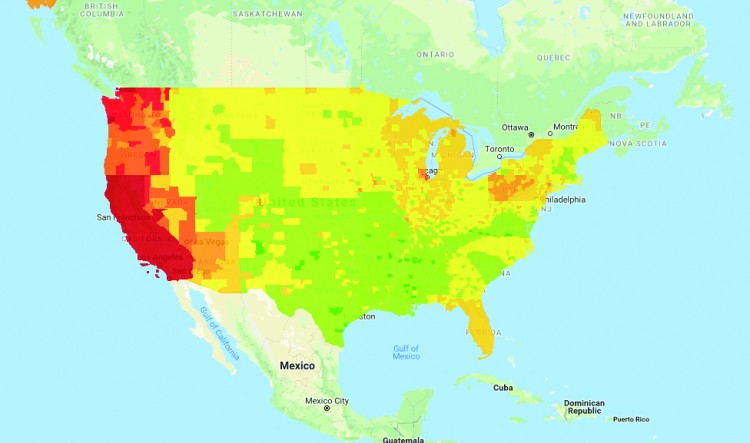 The price of being climate change leaders

The Kent Group has tracked the exchange-adjusted differential between U.S. and Canadian wholesale prices in Seattle and Vancouver.

“Historically, those prices don’t differ much from one another,” Parent said. “In most cases, those cross-border market prices tend to be fairly competitive.

“What we’ve noticed in B.C., in general, as the low-carbon fuel standard has come in, is that gap has opened up quite a bit. As there’s been increased stringency in the LCFS regulation, you see that gap get bigger and bigger.”

Last, but certainly not least, high taxes lead to higher gas prices in B.C. In total, Lower Mainlanders pay $0.34 per litre in provincial taxes and levies.

The single largest levy is for TransLink – $0.17 per litre. Federal taxes bring the total taxes paid in the Lower Mainland to about $0.53 per litre.

Unless the Trans Mountain pipeline is expanded and adds additional capacity for refined fuels from Alberta, British Columbians can expect to see gasoline prices continue to climb, as carbon taxes continue to rise and low-carbon fuel standards increase in stringency.

Worse, Lower Mainlanders can also expect to pay more to drive if mobility pricing ever comes into effect.

Sims calculates that mobility pricing, as proposed, could cost a household with two working people $4,000 to $6,000 per year “just to get into work, not including gas, parking and insurance with taxes.”

If there is one positive thing about high gas prices, it’s that it may be partly responsible for boosting electric vehicle (EV) sales. According to the New Car Dealers Association, 6,265 EVs sold in B.C. in 2018 compared with just 1,781 in 2017.

* Note: due to rounding, sum of individual taxes and actual total do not match

**Note: The price earlier cited for for gasoline in Vancouver, Washington ($0.81) was in U.S. dollars. It has been converted to Canadian.

See related stories: How B.C. could deflate its gas bubble and B.C.’s carbon tax draws scrutiny from politicians and researchers