By Naoibh O'Connor, Vancouver Courier | April 24, 2019, 9:07am
Lululemon Athletica has so far submitted a “rezoning inquiry” for the project envisioned for 1980 Foley St. | Photo: Dan Toulgoet

The City of Vancouver’s director of planning is recommending Lululemon Athletica be granted an exemption so the company can proceed with plans to file a rezoning application to construct an 11 to 13-storey office building at 1980 Foley Street by Great Northern Way. A temporary policy is currently in place that limits rezoning applications within the Broadway Corridor.

Lululemon has so far submitted a “rezoning inquiry” for the project. The director of planning’s recommendation is among items on council’s April 23 agenda.

The Broadway Corridor planning process launched in March. The 30-year plan aims to address subjects including housing, job space, and social and cultural amenities around the future subway route — an extension of the Millennium Line from VCC-Clark Station to Arbutus Street.

Lululemon’s site is within the Broadway Corridor plan study area, which covers Clark Drive to Vine Street between West First and 16th avenues, cutting through False Creek Flats, Fairview, Mount Pleasant and a corner of Kitsilano.

Council adopted an interim rezoning policy in June of 2018, which is in place for the duration of the two-year planning process. The city is only proceeding with rezoning applications that were already in the pipeline for consideration. Projects that could be considered beyond those proposals would be ones involving 100 per cent social or supportive housing.

Rezoning applications that “seek relief” from the interim rezoning policy’s terms can be considered “under exceptional circumstances once reported to council for direction, at the discretion of the Director of Planning.”

In Lululemon’s case, the director of planning recommends, according to the April 23 agenda, “that council approve staff considering and proceeding with a rezoning application review process based upon exceptional circumstances, including that there is no additional density being requested, the provision of job space is aligned with the recently completed False Creek Flats Area Plan, and there is an opportunity to advance strategic streetscape and public space improvements.”

The director of planning states that Lululemon's inquiry incorporates a significant office building that will advance the goals of the False Creek Flats Area Plan such as intensifying job space close to transit and amenities, securing additional public space (China Creek) and improving walking and cycling connections.

Lululemon was founded in Vancouver in 1998. Its current head office is on Cornwall Street.

Lululemon Athletica’s site on Foley Street is between Emily Carr University of Art and Design and Mountain Equipment Co-op, and not far from the property at Clark and East Sixth where Nature’s Path plans to build its new 10-storey head office by the East Van cross.

The Foley Street property was assessed at $79.4 million on the 2019 BC Assessment roll, which assesses property  value as of July 2018. The previous year, the site was valued at $49.4 million.

The city report to council can be found here. 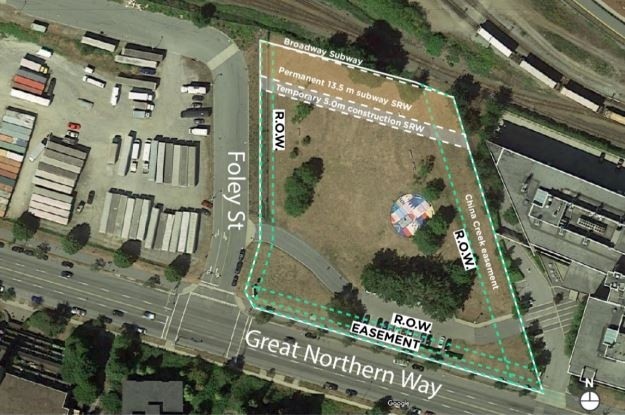 Lululemon Athletica's site for the proposed office building is at 1980 Foley Street by Great Northern Way.