Pro sports leagues slow to allow players to use cannabis

By Glen Korstrom | April 10, 2019, 8:08am
Vancouver Canucks players are tested for cannabis at training camp, during the season and in the off-season | Shutterstock

Cannabis is forbidden to players in most professional and collegiate sports leagues despite an increasing number of jurisdictions across North America legalizing the plant for recreational use.

While most leagues have yet to change policies to enable players to use cannabis, the Canadian Football League (CFL) is the exception, and it is the most accepting of cannabis of the sports leagues that have Vancouver teams.

In a statement to Business in Vancouver, the CFL noted its drug-testing policy for players “has never included testing for marijuana or other recreational drugs.” Instead, the league said, “it focuses on performance--enhancing drugs. That will continue to be the case.”

The league added that it expects all players and staff to obey laws, act responsibly and not come to work impaired.

“We have faith our employees will display that sort of common sense,” the league said.

Other leagues’ policies vary in tolerance for pot consumption. Dentons employment lawyer Taylor Buckley told BIV that “recreational cannabis is not protected by human rights legislation,” so the leagues have a free hand to enter into collective bargaining agreements (CBAs) with players that have no-cannabis provisions.

Attending that program, however, is voluntary, unless the test reveals “dangerously high levels” of THC, said NHLPA spokesman Jonathan Weatherdon.

He stressed that the league’s tests are intended to spot performance-enhancing drugs, not cannabis.

If a player is unreachable for two weeks without a good reason during the off-season, the player is referred to a committee to determine next steps, which could include discipline, according to the CBA.

Major League Soccer forbids players from reporting for work “under the influence” of alcohol or illegal substances. It also forbids “performance-enhancing substances,” and other drugs banned by the World Anti-Doping Agency (WADA).

Vancouver Whitecaps spokesman Tom Plasteras told BIV that the league tests players two to three times per year and that there has never been a case in which a Whitecaps player has been found to have a banned substance in his system.

WADA explicitly bans cannabis but notes that cannabidiol (CBD), a pain-relieving component derived from it, is an exception.

The result is that Whitecaps players could consume high-CBD cannabis and stay in compliance with league policies. 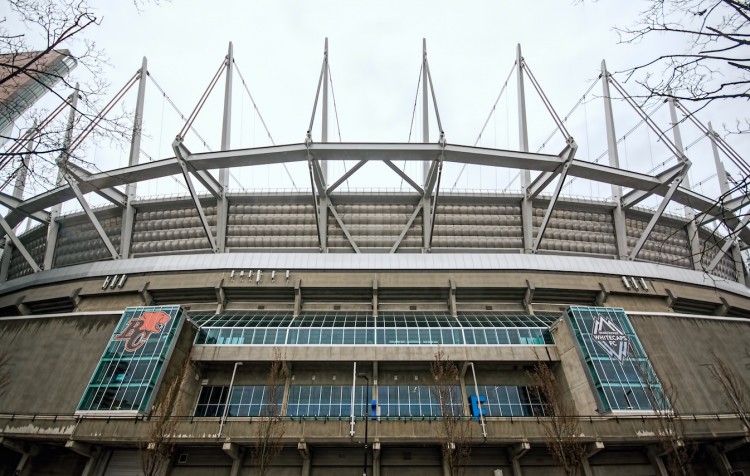 (Image: B.C. Place is home to the B.C. Lions and the Vancouver Whitecaps | Chung Chow)

The players of Vancouver’s fourth professional sports team, the Vancouver Canadians, are officially employed by the parent Toronto Blue Jays and are therefore subject to Major League Baseball (MLB) rules.

“Marijuana, or cannabis, is not allowed in baseball,” Canadians’ president Andy Dunn told BIV. “Whether it’s legal or not legal, it is a banned substance.”

MLB does not regularly test players for what it calls drugs of abuse, but tests may be conducted if the league or players’ union has reasonable cause. Positive tests can result in fines and suspensions.

In December, MLB announced that five minor-league baseball players received 50-game suspensions for violating the rules of a drug-prevention and treatment program.

Dunn said that Canadians players have been suspended in the past but that the team was never told the exact cause.

“We just understand that there’s a suspension,” he said. “It is all administered through MLB, minor-league baseball and Toronto.”

Athletes need to be just as wary at the collegiate level.

The University of British Columbia’s senior athletics director, Gilles Lépine, told BIV that the university follows Canadian Centre for Ethics in Sport regulations, which stipulate that cannabis is a banned substance.

“Cannabis could be used to cover another drug,” Lépine explained.

He said some athletes have been punished after THC was detected in their bloodstreams. Penalties can include suspensions from sports for up to two years, although the student would be able to continue to take classes.

The NCAA is stricter about performance-enhancing drugs than it is about street drugs, but students could be suspended for half a year for having cannabis active ingredients in their systems, she said.

Pro sports leagues may be slow to accept players using cannabis but the National Hockey League Alumni Association (NHLAA) is showing that it is willing to consider that the plant could be helpful for players who have had concussions or injuries.

The NHLAA in March hatched a partnership with the world’s largest publicly traded cannabis company, Canopy Growth Corp. (TSX:WEED; NYSE:CGC), and commissioned a team of neuroscientists to conduct research to determine whether former players could benefit from using cannabis, or more specifically CBD.

NHLAA president Glenn Healy stressed to BIV that the study would not include tests on the therapeutic value of THC, the intoxicating substance in cannabis.

Neurosurgeon Amin Kassam will head a team of scientists who will conduct the tests as part of a new organization known as Neeka Health Canada – which Healy calls “an all-star team.”

The 100 or so players who will take part in the testing have been promised confidentiality. It will include some brain scanning early on and then some vestibulo-ocular reflex and neurofascial testing.

“[I’m] quite frankly getting tired of getting calls from players’ wives and kids saying, ‘I want my dad back,’” Healy said. “That’s why we’re being proactive with it.” •