By Naoibh O'Connor, Vancouver Courier | April 3, 2019, 4:45pm
The St. Paul's Hospital on Burrard Street is up for sale but the hospital will continue to operate until the new one on Station Street is completed | Photo: Dan Toulgoet

The St. Paul’s Hospital 6.6-acre site on Burrard Street in downtown Vancouver is up for sale now that plans are moving forward for the replacement health care facility on False Creek Flats.

News of the sale was first reported in a John Mackie story in the Vancouver Sun April 2.

Proceeds will help cover costs for the new $1.9-billion St. Paul’s Hospital on Station Street, which is expected to be completed by 2026.

“Situated at the highest point in the downtown core, this expansive site holds the immense potential to become a ‘city within a city' including the next series of signature mixed-use towers that will shape the skyline of Vancouver and direct the future of the downtown core,” the sales brochure states.

Shaf Hussain, a spokesman for Providence Health Care, said he believes the site went to market soon after the Feb. 15 announcement revealing that the new St. Paul's Hospital was officially moving forward. He said a "unique part of this project" is that the sale proceeds will be PHC money since it owns the land, so "the cost to the taxpayer is minimized." He noted that the provincial government stated on Feb. 15 that its contribution will be $990 million.

“The maximum height permitted within the ODP is 300 feet, and allows an increased height up to 450 feet to be considered on a discretionary basis. The West End Plan allows maximum heights up to 550 feet to be considered for rezoning applications,” Karen Hoese, the City of Vancouver’s assistant director of the rezoning centre, stated in an email to the Courier. “However, the maximum height on most of the site (except the Burrard/Comox corner) is limited to approximately 180 to 200 feet by View Corridors.”

Meanwhile, under zoning, the maximum density that could be achieved is up to 6 floor space ratio (+10 per cent heritage density).

“However, on any site, the maximum density cannot always be achieved due to site specific constraints, urban design objectives, on site open space and impact on traffic and other infrastructure,” Hoese explained.

“Based on some very preliminary analysis and taking into account view corridors, shadow analysis of nearby parks, on site open space, heritage retention, tower form and separation, and transportation requirements, it is anticipated that the density achievable on the site under the existing zoning could be in a range of roughly 1.4M square feet gross floor area. This is only a preliminary estimate and more detailed analysis on this would be required to confirm that number.” 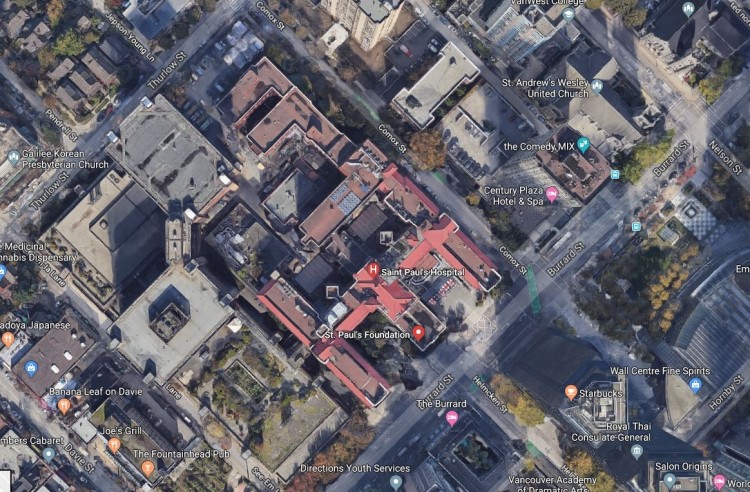 Heritage Vancouver is one organization that’s keeping an eye on the sale and future plans for the site — St. Paul’s Hospital landed in the No. 2 position on Heritage Vancouver Society’s Top 10 Watch List in 2015 after the provincial government and Providence Health Care announced the plan to move the hospital from Burrard to Station Street. (It was also on Heritage Vancouver’s 2006, 2007, 2012 and 2013 top 10 lists.)

In its 2015 watch list, the organization urged that “the maintenance, retention, seismic upgrading and restoration of the historic Burrard Building be included in the planning process for the future use of the existing St. Paul’s site."

The Burrard Building is comprised of the centre block, the oldest surviving section of the hospital that was built in 1912-1913, and the north and south wings that were completed in 1931 and 1939.

"In the rush to attempt to maximize revenue-generating development on the existing site, the Burrard Building risks being sacrificed. The excuse given is the need for extensive seismic upgrading of the historic building," Heritage Vancouver noted in its 2015 watch list.

"However, detailed engineering studies have proven the feasibility of seismic upgrading as part of the adaptive reuse of the Burrard Building for office and support services. Therefore, this historic building could be adapted to these purposes or possibly to unique residential uses, as part of the future development on the existing site."

The City of Vancouver’s Heritage Action Plan encourages the conservation and celebration of heritage resources, according to the email from Hoese. The site is listed in the ‘A’ evaluation category on the Vancouver Heritage Register, which identifies the site to be of primary significance. Statements of Significance (SoS) have been prepared for three buildings:

The city says future uses for the site would be determined through a development permit process, including the opportunity for public input, while Vancouver Coastal Health and Providence Health Care will determine future health care planning in the area.

The sales brochure indicates that Providence Health Care will “enter into a sale and leaseback with the buyer until the new hospital is ready for occupancy.”

“The existing St. Paul’s hospital will continue to operate on the site until a new hospital is developed,” it states.

For more stories from the Vancouver Courier, visit www.vancourier.com.