The good news for owners of commercial property Monday was that Vancouver city council voted 6-5 to reduce their tax bill by two per cent over the next three years.

The bad news for homeowners is that reduction means the 4.5 per cent property tax hike council initially approved in December for this year is now 6.1 per cent.

How can council do that?

Under law, council had until the end of April to finalize its $1.5-billion budget. Back in December when council voted on the budget, it also requested staff study the feasibility of a two per cent tax shift from commercial properties to homeowners.

Staff recommended Monday against the tax shift for various reasons, including not being able to guarantee that savings from a reduced tax bill would be passed on from a landlord to a small business owner.

A blanket two per cent tax shift from commercial to residential reduces property tax for all commercial properties, without considering whether they need any tax relief, the staff report said. 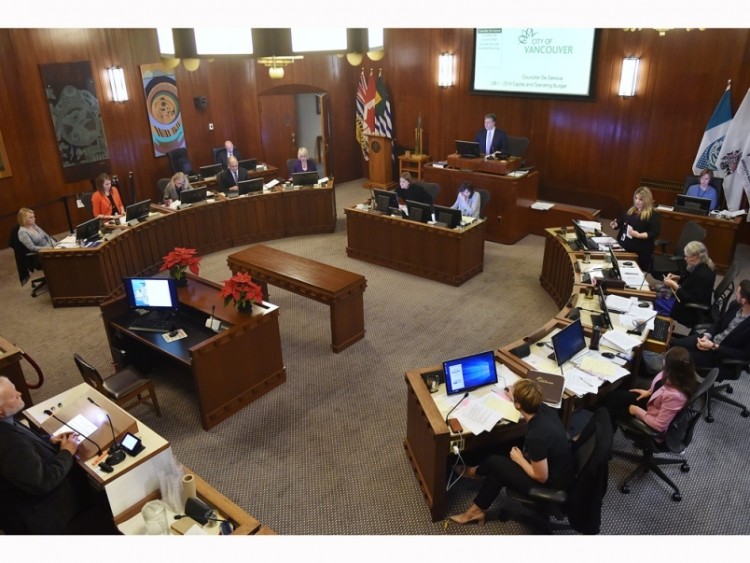 “The fact that we’re going to have a residential property tax hike of one per cent [this year] and that’s going to hit some people that can least afford it while this provides a tax cut to large companies—I can’t balance that,” Stewart said.

“We’ve worked so hard to make housing more affordable, but yet this motion kind of signals the opposite,” the mayor continued. “I don’t think the vast majority of people, when they read about this, are going to be very happy.”

Stewart and the four councillors wanted to stick with staff’s recommendation, which noted work continues with an intergovernmental group to provide targeted and time-limited tax relief to commercial property owners.

That group is also examining creating small business classes and offering more “split assessments,” which aim to tax residential development potential at a residential rate, while taxing the business portion of a building at a business rate.

All of council was clear they wanted to support small businesses and to keep them from closing in a city deemed one of the most unaffordable in the world. That included Hardwick, an entrepreneur, who said she understands problems small businesses face.

“I also know that our residents are facing huge problems around property taxes, and we’ve already talked about the implications of the provincial government’s encroachment on our property tax base, in particular through the so-called school tax,” she said. “My concern is that this [tax shift] is a binary, short-term blunt instrument solution to a much larger problem.”

This applies to both residential and non-residential property classes. 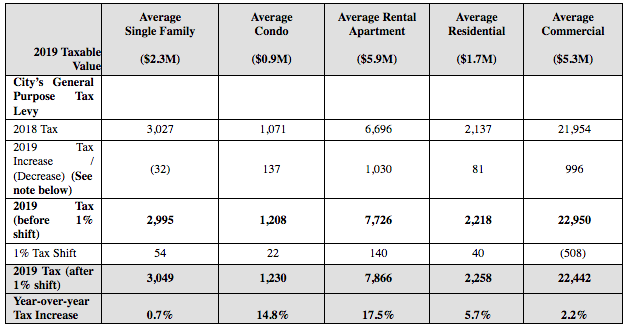 What a one per cent tax shift—the amount that kicks in this year—represents for homeowners and property owners based on taxable value. Image courtesy City of Vancouver

NPA Coun. Lisa Dominato successfully moved the motion for the two per cent tax shift over three years after NPA Coun. Sarah Kirby-Yung’s motion to provide an immediate two per cent relief for this year failed.

Dominato described the shift as “modest,” saying it would be one per cent this year, followed by .5 per cent in 2020 and another .5 per cent in 2021. She provided a table to the Courier after the vote that showed the owner of a home assessed at $1 million would pay another $23 on top of the initial $52 increase.

For a commercial property of the same value, the savings would be $90.

“The small businesses are really fundamental to the character of our community, to our city, and when I talked to homeowners about [a tax shift], it was welcomed—they understand that it might be $40 or $80 more on their property tax,” Dominato said.

“I didn’t feel there was a divide of homeowners versus businesses. It was very much that we value our small businesses, we value having jobs in our community so people can work here and live here.”

Council made its decision after hearing from business groups from across the city, particularly business improvement associations. All urged council to support a two per cent tax shift, citing concerns about businesses going under, or close to it. 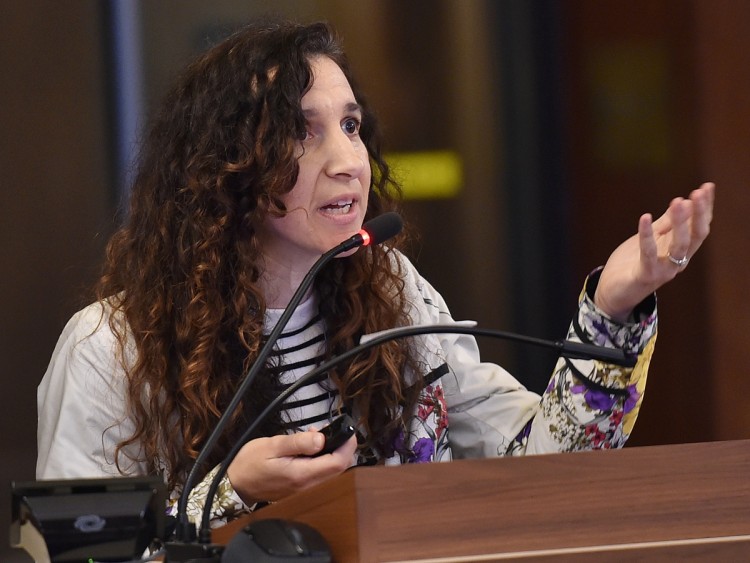 “Seventy-five businesses have closed on West Broadway since 2015—that’s over 25 per cent of our area, so we should put up a sign that says, ‘Sorry, we’re dead’ because that’s what it looks like right now,” she said, clarifying to council later that increases in taxes was the main reason for closures.

Patricia Barnes, executive director of the Hastings North Business Improvement Association, said businesses in that area of the city need help. Barnes described it as “a crisis situation” and that a two per cent tax break would alleviate some of the financial burden for businesses.

“It would be a signal to our businesses that this administration will listen to them, will hear that small business is in trouble and actually want to do something about it,” she said, noting she has been asking for “split assessments” for 10 years. “However, the importance of the two per cent shift today is about signaling to our business community that they matter.”

Council also heard from Dr. Stanley Hamilton, who was the chairperson of two property tax policy review commissions. In 2007, the commission recommended a five-year tax shift and the council of the day approved it, moving $23.8 million in taxes from commercial properties to homeowners.

“When we looked at this in 2007, we felt that the share paid by business was simply too high compared with other municipalities across the country and that’s why we recommended the shift,” said Hamilton, a retired professor of real estate from the Sauder School of Business at University of B.C. “I’m not convinced that it’s too high right now.”

Council also received a letter from the executive directors of the B.C. Non-Profit Housing Association and Co-op Housing Federation of B.C., who opposed the tax shift.

The shift “would be at cross-purposes” with the city’s desire of seeing 12,000 new social, supportive and non-profit and co-op homes built over the next 10 years, wrote Jill Atkey of BCNPHA and Thom Armstrong of CHFBC.

“We admire the city’s approach to date in supporting and incentivizing the development of new purpose-built rental and affordable housing, but an across the board tax shift of two per cent would have significant, negative impacts for the community housing sector and could jeopardize plans for that increased supply,” they said.

The additional tax burden on a typical new affordable housing development in Vancouver ranges between $6,000 and $12,000 per year, meaning an increase of rents and housing charges of $6 to $12 per unit per month for residents, they said.

“This may seem like a small amount for many, but for residents in need of affordable housing, it could mean the difference of having a child attend a field trip, or needing to stay behind,” they said.