Bill 22 is a catch-22 for B.C. forest companies, critics say

By Nelson Bennett | May 21, 2019
Crown forest tenure is concentrated among a few big players in B.C.

A debate on forestry tenure reform in the B.C. legislature two weeks ago was capped on May 10, with the announcement of the permanent closure of a sawmill in Quesnel.

Tolko Industries Ltd. announced it will permanently shut down its Quest Wood sawmill in August and eliminate one shift at its Kelowna sawmill. That’s 150 job losses for Quesnel and 90 for Kelowna.

British Columbians can expect more such announcements in the coming months and years. It is estimated that six to eight sawmills in B.C. will need to permanently shut down due to a shrinking annual allowable cut.

When those mills close, the Crown tenure – cutting rights – associated with them would likely be up for sale or transfer. Typically, tenure can be sold to other companies that still operate sawmills and need the fibre.

But the BC NDP government plans to intervene in any future sales or transfers. Under a new act – Bill 22 – any transfer or sale of tenure will need ministerial approval. The bill was given first reading April 11 and was immediately implemented by order-in-council, putting it into effect.

Doug Donaldson, minister of forests, lands and natural resource operations, said there was some urgency in getting the new bill in place.

“There was concern that there might have been moves by forest companies to further concentrate tenure while the debate in the legislature was happening,” Donaldson said. “The intent of Bill 22 is to address concentration in the tenures in the forest sector amongst five companies or more. More diversity and more competition means a more vibrant sector.”

Before any sale or transfer of tenure is allowed, the Ministry of Forests will allow First Nations, workers and the general public to weigh in. It is expected that some of the tenure now concentrated in the hands of a few big players will end up with smaller organizations, including First Nations.

But the larger tenure holders are warning that the bill adds to uncertainty, which could curb investment in B.C.

“We understand that the government has an interest in how tenure is used in the province – [we] fully respect that,” said Council of Forest Industries CEO Susan Yurkovich. “But now there is an added test, which is an unknown test. There’s a test of ‘public interest,’ which has not yet been defined.”

Bill 22 appears to pit the big players – large tenure holders – against the smaller ones, which often can’t compete for logs to supply their mills. 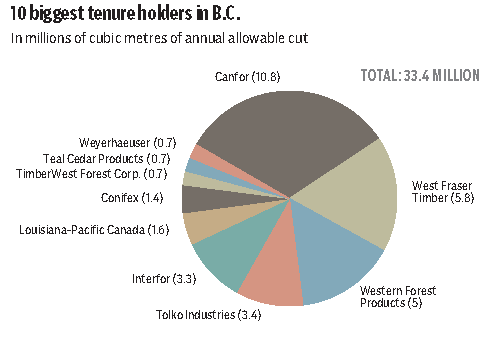 The new legislation came as a surprise, and without consultation, according to critics in the industry. BC Liberal forestry critic John Rustad sees it as a kind of potential expropriation without compensation.

In a recent conference call with analysts, West Fraser Timber (TSX:WFT) CEO Ted Seraphim said his company has invested $600 million in B.C. in recent years but is now concerned about the NDP government’s “myriad of policy changes” creating an uncertain investment climate.

“We believe that policy proposals, such as the caribou plan and Bill 22 legislation, could potentially impact the ability of the B.C. industry to compete in a very competitive global environment,” Seraphim said.

Companies like West Fraser began voting with their feet a decade ago, when they began buying up sawmills and timber in the U.S. West Fraser now owns more mills in the U.S. than it does in B.C.

Paul Quinn, forestry analyst for RBC Capital Markets, says both Bill 22 and the Coast Forest Sector Revitalization plan will make it harder for some forestry companies to do business in B.C.

Donaldson defends Bill 22, however, as necessary for ensuring that a public asset serves the public, not the big forestry companies.

“Businesses will look after businesses, as it should be, but the government role is to look after broader public interest, and the forests belong to the people of B.C. and are not assets belonging to companies,” he said.

Harry Nelson, associate professor with the faculty of forests at the University of British Columbia, says a look at B.C. history helps put Bill 22 in context.

“I think it’s disingenuous to suggest that this is somehow an expropriation,” Nelson said.

He said Bill 22 essentially returns things to the way they were about 15 years ago. Back then, the minister of forests had to approve transfers of tenure.

“There was also a 5% automatic take-back on any tenure transfer,” Nelson said, adding that over the years there has been a wave of consolidations among the larger forest companies that concentrated tenure among the big players.

“I think it’s a beneficial change if we develop a diversified supply base,” he said.

Aaron Sinclair, a business consultant and principal with PNL Consulting, also thinks Bill 22 is a reasonable approach to trying to stem the loss of mill jobs, since it might free up tenure for some of the smaller operators.

“There is even a legitimate risk that, if the Crown doesn’t regulate licence transfer, it could lead to complications in First Nations relationships and treaty negotiations,” Sinclair said.