B.C.’s busiest public golf courses have experienced ups and downs over the past five years.

The average number of rounds played at the province’s top 10 golf courses grew 9.1% since 2014. However, the growth masks the industry’s volatility throughout the five-year period.

The decline, however, was short-lived. In 2018, the number of rounds jumped 16%, according to data collected for Business in Vancouver’s Busiest Public Golf Courses in B.C. list.

Over that same year, the median number of rounds played, which has typically been lower than the average rounds played, increased by 19.6% over the year and surpassed average growth. This suggests that courses lower on the list grew more than courses higher on the list.

Estimated revenue for the five golf courses with five years of data available did not show the same recovery from their 2017 low as the average of all courses on the BIV list.

Fraserview Golf Course (No. 6) experienced an even greater discrepancy between the number of rounds played in 2018, which was up 8.9%, and revenue, which fell by 10.5%.

Over the five-year period covered by BIV’s list, Fraserview’s rounds played rose by 2.5% while revenue fell 15.7%. 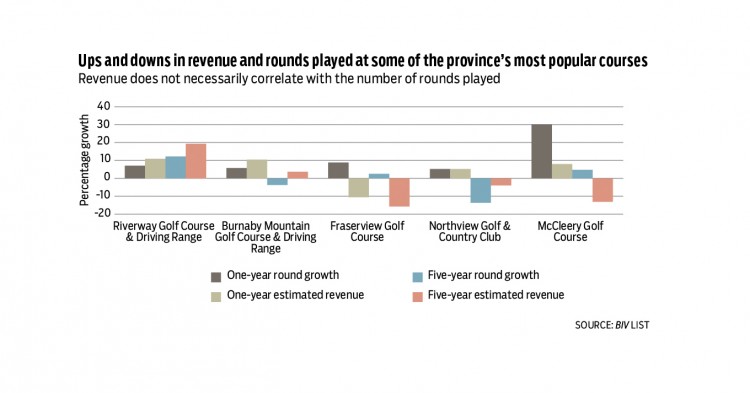