By Elana Shepert, Vancouver Is Awesome | May 23, 2019
The Canadarm2 robotic arm with its robotic hand, also known as Dextre, attached for fine-tuned robotics work extends across the frame as the International Space Station orbited 256 miles above the Atlantic Ocean. Photo: NASA Johnson / Flickr

Want to view the International Space Station up close and personal?

According to Space.com, it’s somewhat of a commitment. Actually, it requires that you are in amazing physical condition and have at least a bachelor’s degree in engineering, biological science, physical science, computer science or mathematics, as well as three years of professional experience before you are even considered for the selection process.

With this in mind, only a diehard astronaut hopeful will commit to this lengthy and demanding journey. However, you can still view this marvel of human ingenuity from a distance with both feet firmly planted in Vancouver soil (or grass, or pavement – you get the picture). In fact, the International Space Station is viewable from the Lower Mainland on numerous occasions – but you’ll have to know exactly where and when to look for it. 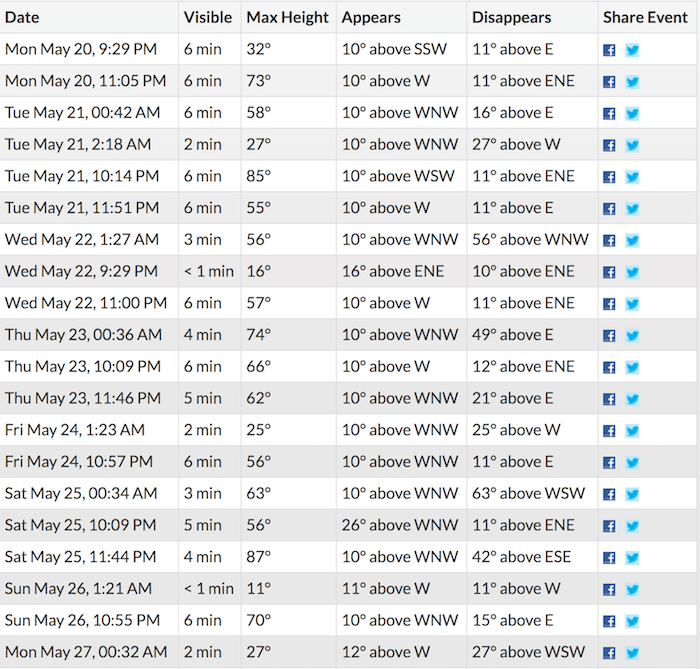 Of course, knowing where and when to look is only half the battle – you’ll also have to know what to look for.

According to NASA, the station is visible to the naked eye and looks like a, “fast-moving plane only much higher and traveling thousands of miles an hour faster.”

Luckily, it is the third brightest object in the sky, which makes spotting it less difficult. Like the moon, the space station is visible because it reflects the light of the Sun. And, naturally, viewing opportunities are best on clear nights.

The football field-sized space station serves as a testbed for technologies and supports NASA’s mission to push human presence father into space. Learn more about station updates and research here.

Visit the Sighting Opportunities page and enter your location to find out when the space station will be passing over you during the next two weeks.