After four years of slow growth, the 20 largest firms have finally surpassed 2015 levels

The province’s largest law firms have added more local lawyers to their rosters in 2019, with the average number of lawyers at the top 20 B.C. law firms surpassing the previous 2015 high.

While it took four years for the average to rebound, the median recovered faster. After a year of stagnation the median number of lawyers grew 9.9% in 2018 to 78, surpassing the 2015 average. This suggests that smaller companies lower on the list grew at a greater and faster rate than their larger counterparts higher on the list.

This pattern is also evident among the firms in the top five, where the growth in the number of lawyers by No. 3 Lawson Lundell LLP and No. 5 Blake, Cassels & Graydon LLP exceeded that of the law firms in first and second place. Lawson Lundell grew 22.7% from 2015 to 2019, while No. 1-ranked Fasken Martineau DuMoulin LLP grew only 2.8% and No. 2 Borden Ladner Gervais LLP declined 3.1% during. 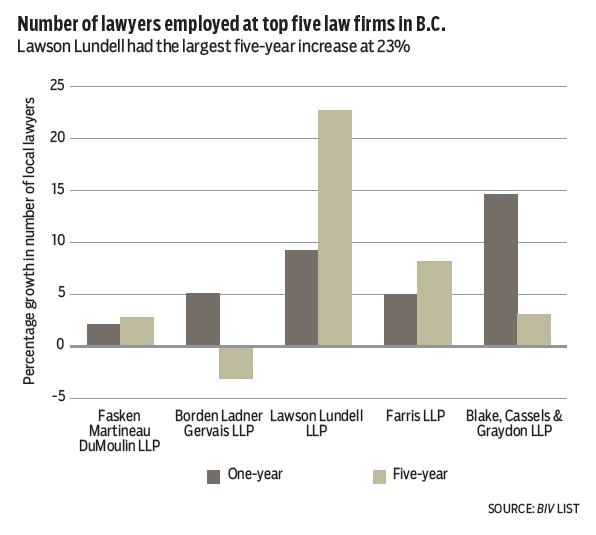 However, over the past year the average number of lawyers has begun to catch up to the median, meaning that larger firms are beginning to grow at a faster rate than the smaller ones.

Since the 2016 slump, when the average and median number of lawyers working at B.C.’s largest firms were at their five-year low, the province’s top 20 firms have generally enjoyed continued growth.