The report cited relatively stable cannabis use in the country between 2004 and 2011, when it was 9.1%. The rate then went up incrementally, and started to rise rapidly starting in 2013.

“This is largely a result of a decrease in the perception of risk around cannabis use and of the national debate about legalizing non-medical use of cannabis,” the report said.

Despite the report describing cannabis as the most widely used drug worldwide, only 3.8% of the global population aged between 15 and 64 years old were said to have consumed cannabis at least once in 2017.

That global estimate of about 188 million cannabis consumers in 2017 who were between 15 and 64 years old was relatively flat in percentage terms between 2007 and 2017, after rising from being 3.4% in 1998, according to the report.

Low use in Asia (around 2%) and India (slightly more than 3%) helped keep the global percentage figure as low as it is.

The report cited Health Canada data that showed that B.C. has the highest rate of cannabis consumption among provinces, with 23.4% of people who are older than 15 years old consuming cannabis in 2017. 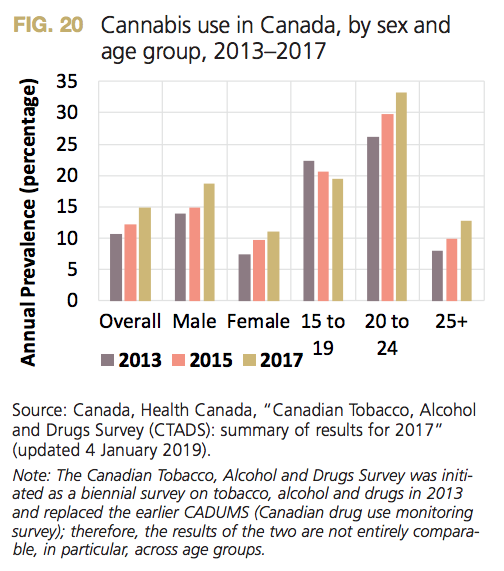 That rate towered over other provinces, with Nova Scotia ranking second with 18.8%  of its population and Manitoba coming in third with a 15.7% rate.

Only 37% of Canadian cannabis users were said to be using the substance for medical purposes.

“The increase in cannabis use in Canada since 2013 has been more pronounced among adults (aged 20 or older) while it has declined among young people (aged 19 or younger),” the report said.