One-third of Alberta crude exports went to China in 2018: StatsCan

By Nelson Bennett | June 13, 2019, 2:30pm
The Ambelos, a crude oil tanker, left Vancouver for China in May. |Rick Voice, marinetraffic.com

More than $1 billion worth of Alberta crude was exported by oil tanker via Vancouver in 2018, with China accounting for about one-third of the sales.

The U.S. remains the single biggest buyer of Alberta crude.

According to data supplied to Business in Vancouver by Statistics Canada, 7.5 million barrels of Alberta crude shipped to Asia via Westridge Marine Terminal in 2018, with a total value of $539 million.

In total, $1.4 billion worth of Alberta heavy was exported via Vancouver in 2018.

The spike in exports, especially to China, was unusual, and was likely largely due to a sharp drop in Alberta oil prices in 2018 – something which a curtailment on production has since reversed.

Hibernia oil producers in Newfoundland also sold close to 1 million barrels of heavy crude to China in 2018, at a value of $92 million.

As for 2019, the Statistics Canada data only goes up to March. And to date, it shows no exports of Alberta crude to China, via Vancouver.

Using marinetraffic.com, Stewart Muir, executive director of Resource Works, has identified at least one oil tanker that left Vancouver for China in May – the Ambelos.

Critics of the Trans Mountain pipeline expansion project have often pointed to the lack of current exports of oil to Asia as proof there is no demand for Alberta heavy oil in China. But the data suggests that there is a demand, provided the price is right.

“Contrary to what some people have said, in fact China and other East Asian countries do very much value heavy oil from Alberta,” Muir said.

“I’ve long believed this was the case, but now we have solid irrefutable numbers that say more than half a billion worth of Canadian bitumen was purchased by interests in Asia last year.” 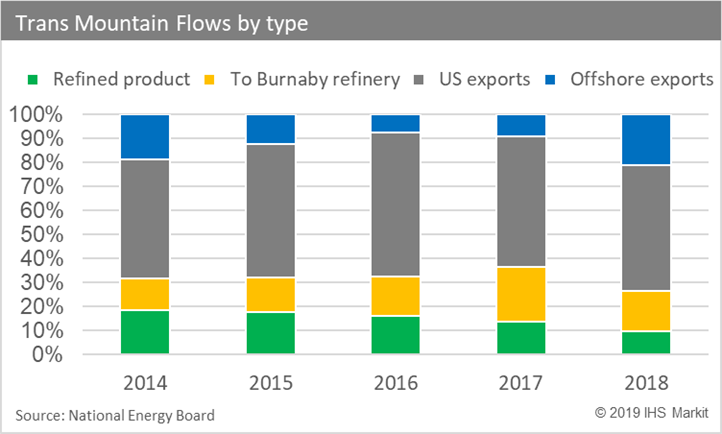 The existing Trans Mountain pipeline is a batched pipeline than can move a variety of petroleum products, including crude oil and refined fuels. But currently more than half of the crude oil that moves on the pipeline ends up going to Washington State, via the Puget Sound spur line.

About 20% of the product that flows on the Trans Mountain pipeline in 2014 was refined products. That dropped to about 10% in 2018, according to IHS Markit and National Energy Board.

About 15% is light sweet crude to the Parkland Fuels refinery in Burnaby. Waterborne crude exports have varied from 10% to 20% of the pipeline’s capacity.

If the Trudeau government ever makes good on its promise to proceed with the expansion of the Trans Mountain pipeline, a new, second line would be dedicated strictly to heavy crude oil from Alberta, which could free up the existing batched line for more refined fuels and potentially more crude for the Parkland refinery.

Compared to oil delivered strictly by pipeline, oil that can move by tanker is more fungible.

Once the oil is on a tanker, it can go pretty much anywhere, so if China isn’t prepared to pay the asking price for Canadian oil, Singapore or Malaysia might, said Kevin Birn, an analyst with IHS Markit.

“You put something in (a pipeline), it’s going to show up in the same place every single week,” Birn said. “With marine vessel, you can always reroute. You can move to the highest price point.

“If you watch major hurricanes going to the Gulf Coast, if they’re anticipating a shutdown of refineries, you literally see tankers turn and head towards the Gulf Coast and follow in the storm because they’re chasing a price lift.”