Market may have slowed in past 18 months, but just as many Metro Vancouver homebuyers are entering bidding wars, finds survey

The Metro Vancouver real estate market may have slowed down over the past 18 months, but that doesn’t mean the dreaded bidding war is dead.

According to a survey released June 13 by the Canada Mortgage and Housing Corp. (CMHC), just as many people who bought a home in fall 2018 said they had entered a bidding war as those who purchased during the busy real estate market of 2017.

Overall, 55 per cent of Metro Vancouver homebuyers surveyed in 2018 said they were engaged in a bidding war, which is the same percentage as in the 2017 survey.

However, it’s worth noting that the survey doesn’t include buyers who have purchased more recently, in the slow spring market of 2019.

The survey also asked buyers about factors that they believe have influence on the housing market in their region, and the spectre of the foreign buyer remains in the forefront, despite rapidly falling foreign buyer numbers and the 2016-launched foreign buyer tax.

In the new survey, 70 per cent of Metro Vancouver homebuyers surveyed felt foreign investors had “a lot of influence” on house prices in the region, compared with 68 per cent in 2017. 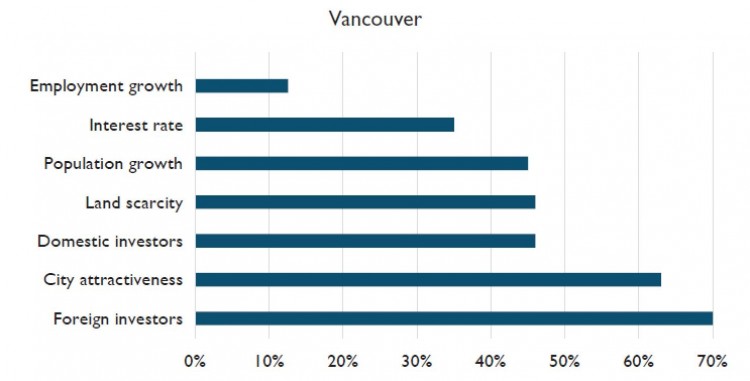 These results showed the proportion of respondents who agreed that these factors had "a lot of influence in the housing market" in a survey by CMHC in fall 2018. Source: CMHC