Metro home sales, B.C. employment up in May

Call it a slight win: Lower Mainland sales weren’t terrible in May; they were just poor.

Multiple Listing Service (MLS) home sales in Metro Vancouver and Abbotsford-Mission jumped 30% from April on an unadjusted basis to 4,112 units. This exceeded the average monthly increase of 6% observed over the past 20 years, which suggests a pickup in demand though levels remained weak.

At 10% below 2018 levels, this marked the fewest May sales since 2001. Adjusting for seasonal factors, last month was consistent with levels during the sales downturn observed in 2012-13, and constrained by federal mortgage stress tests and provincial policy measures.

Buyers may also be skittish to pull the trigger on sales in a declining price environment. Condominium apartment sales fell 15% year-over-year, with detached sales down 7%.

Inventory continues to creep higher as homes sit longer amid a modest flow of new listings. Active listings rose to the highest level since late 2014. The sales-to-active-listings ratio – a barometer of market tightness – firmed, but buyers are still in the driver’s seat in negotiations.

Sales are at or near bottom and a modest upward trend is anticipated later in 2019, although prices are forecast to decline through the end of the year. We forecast a peak-to-trough decline in benchmark price of 12% to 15% and a retracement to early 2017 levels.

B.C.’s labour market momentum continued through May. Employment jumped by 16,800 people or 0.7% from April to a seasonally adjusted 2.6 million.

This was statistically significant, outpacing the national gain of 0.1%, and trailing only Nova Scotia and New Brunswick. Year-over-year growth surged to 4.3% (more than 107,000 people) in B.C., which was the strongest reading since mid-2017. While we are wary of single-month data, employment has accelerated since mid-2018.

Both full-time (up 0.6%) and part-time tenure employment (up 0.8%) rose from April. Average unemployment declined from 4.6% of the labour force to 4.3%, underscoring what is still the country’s tightest labour market.

Employment growth in the Vancouver census metropolitan area lagged behind the provincial employment picture with a 0.4% monthly gain. With year-over-year growth hitting 6.3%, hiring remains robust and an unemployment rate of 3.9% points to labour shortages. • 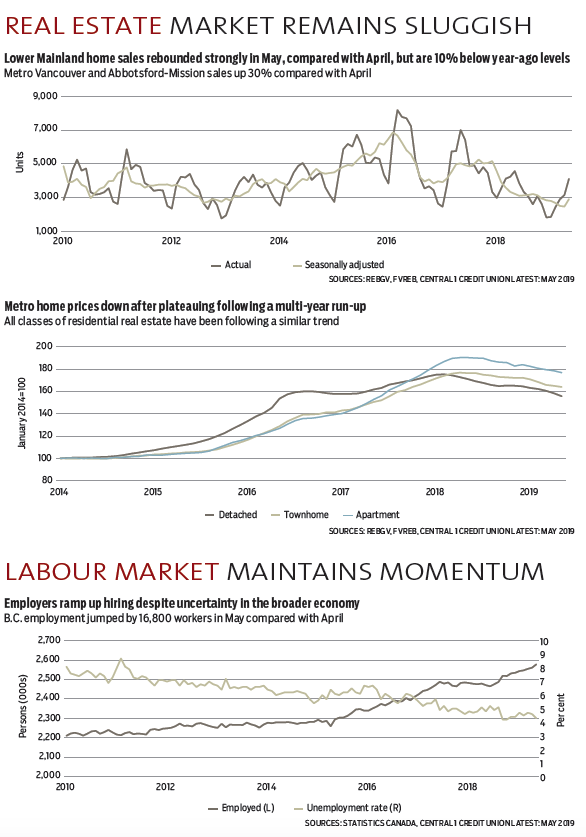