By Alan Campbell, Richmond News | June 6, 2019, 2:35pm
The Jesko, which was revealed in Canada for the first time at a hangar in YVR's south terminal | Submitted

What’s being touted as the “world’s fastest megacar” made its Canadian debut in Richmond last week.

The Koenigsegg Jesko was unveiled at a glitzy event hosted in a hangar in YVR’s south terminal on Friday evening.

It had previously been revealed to the public for the first time at the 2019 Geneva International Motor Show in March.

The Jesko is the successor to the Agera RS that broke the production car world speed record in November 2017.

The car has a starting price tag of around US$2.8 million and is thought to be capable of speeds of up to 300 mph. 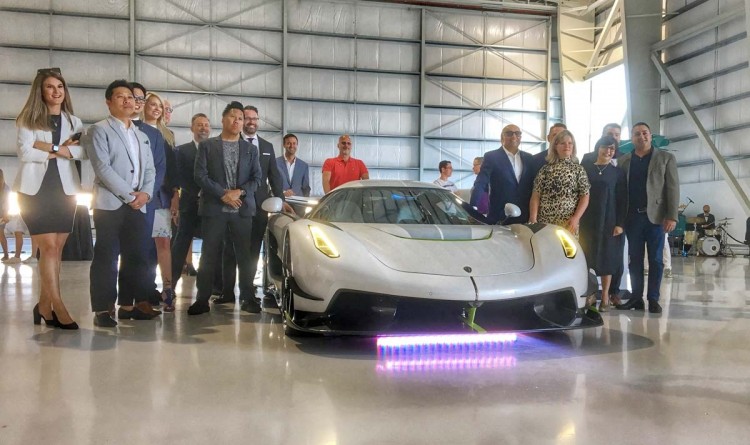 Around 100 car enthusiasts greet the Jesko when it was unveiled in Richmond last Friday. Photo submitted

“Koenigsegg’s simulations say that the Jesko should be the world’s first 300mph car. It truly is a technological marvel.”

At its heart, the manufacturer says the Jesko features one of the most powerful production internal combustion engines on the planet.

“Re-designed with a 5.0 litre twin-turbo V8 engine that produces 1280hp on standard gasoline and 1600hp on E85 biofuel, it also features the world's lightest V8 crankshaft,” stated the press release.