Market decline largely due to interest rates and affordability, but sales would be 10 per cent higher without stress test, says economic study

Home sales in B.C. in 2018 would have been approximately 10 per cent, or 7,500 units, higher if the B20 mortgage stress test hadn’t been introduced, according to a new economic study by the B.C. Real Estate Association (BCREA).

The rest of the real estate slowdown can be explained by other market factors such as rising interest rates and lack of affordability, along with provincial government housing policy interventions, said the association.

Brendon Ogmundson, BCREA’s deputy chief economist, and Kellie Fong, economist, wrote in their report, “Home sales across Canada plummeted to start 2018. The near-coincident implementation of several new federal and provincial housing policies designed to temper B.C. housing demand has given rise to competing explanations for what ultimately caused the downturn. Was it the B20 mortgage stress test? Higher interest rates? The provincial speculation tax or the expansion of the foreign buyers’ tax?”

The economists said that many markets across Canada saw a sales slowdown immediately following the January 2018 launch of the B20 mortgage stress test, making this factor a common cause of at least part of the decline. 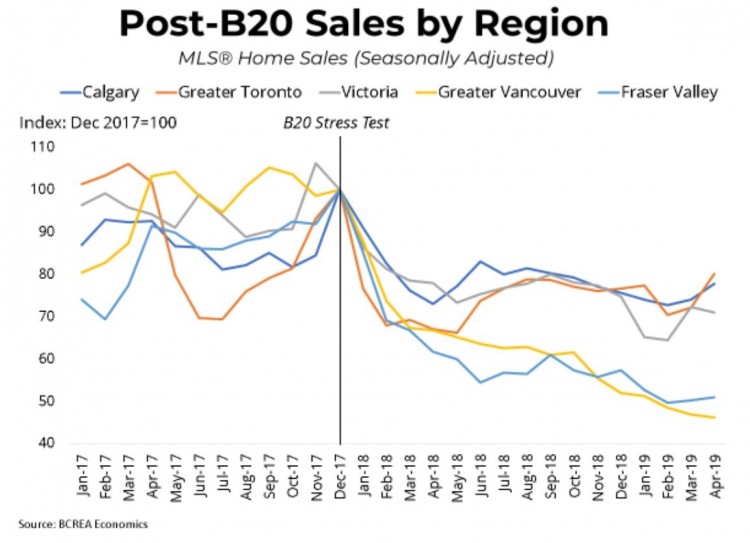 The authors wrote, “The coordinated decline in Canadian home sales, which began immediately after the implementation of B20, makes that policy a natural place to look as we investigate the cause of the housing downturn. The fact that so many Canadian markets saw home sales drop sharply to start 2018 indicates a common factor driving that decline.”

BCREA used an economic forecasting model to calculate a baseline projection of sales in 2018 without the stress test, considering only other factors. “We estimate a 2018 baseline of B.C. home sales of 90,500 units, a decline of roughly 11,000 units from 2017. This decline was driven by market forces such as rising interest rates, deteriorating affordability and a slowing economy.” 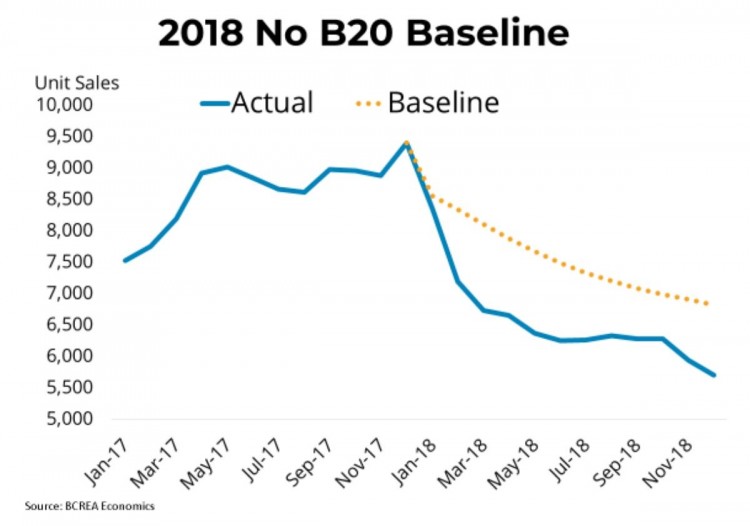 The authors concluded, “We estimate the lost sales due to B20 [stress test] in 2018 to be a range of 5,300 to 11,500 units, with an average of 7,500 units. On average, we estimate that B20 accounted for about 30 per cent of the total downturn in BC home sales observed in 2018 and cost the province approximately $500 million in spin-off activity related to MLS home sales.”