Vancouver council voted July 9 unanimously in favour of a rezoning application that will allow a 32-storey office tower, measuring 393.5 feet, to go up at 1166 West Pender St.

Supporters cited the need for more office space downtown, as did several councillors before the vote.

Reliance Properties put forward the application, while Hariri Pontarini Architects is the design architect. Staff noted the design of the building, which is terraced at the top, received “very strong support” from the city’s Urban Design Panel.

The city received 20 pieces of correspondence in support of the 1166 West Pender project and nine against.

At Tuesday’s public hearing, seven people spoke. Three spoke in opposition, all of whom live in the Sapphire building, located at 1188 Pender St., next to the development site.

Benefits of the proposal, according to city staff, include the creation of new job space close to transit, public realm improvements and cash contributions towards childcare and affordable housing.

Since 2009, more than one dozen rezoning applications and development permits have been approved for job space, although some residential uses still exist in the area today. 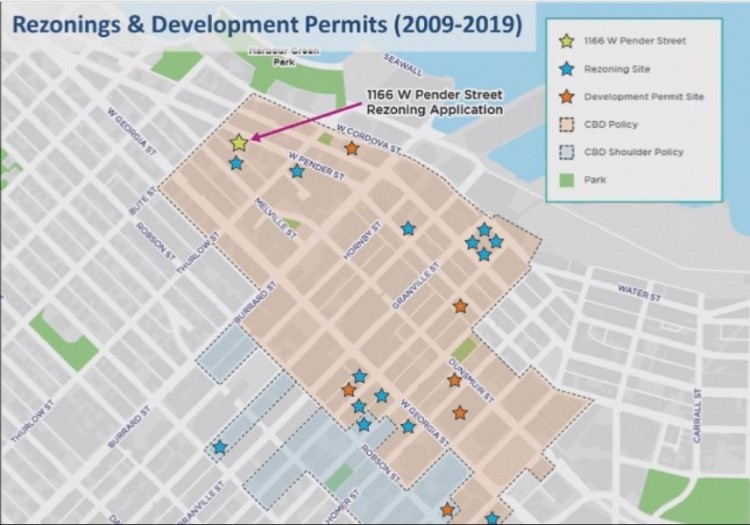 Staff identified two areas of concern during the public hearing — the need for public space in the area and how construction would impact neighbouring childcare centres — but explained the applicant had addressed those issues.

CBRE spokesman Norm Taylor spoke in favour of the project at the public hearing.

Taylor said Vancouver currently ties with Toronto for the lowest office vacancy rate in North America. The vacancy rate sits at 2.6 per cent. A year ago, it was 4.7 per cent, while eight per cent is considered a balanced market where the tenant and landlord are equals at the negotiating table.

Taylor maintains the market can handle the new supply that’s in the pipeline.

“We usually assume 30 per cent on the date the building is delivered,” he said.

He added that one million of the 1.8 million square foot figure is pure growth or new tenants into the market place. Only 800,000 of it is existing tenants moving.

Taylor concluded that if every new building coming into the pipeline is included in the 10-year forecast, it’s projected the city will come out with a 6.2 per cent vacancy rate.

“So can we handle more supply and do we need more supply in Vancouver? Absolutely, yes. It will not crater the market provided we don’t have any economic major downturn,” he said.

Charles Gauthier, president/CEO of the Downtown Vancouver Business Improvement Association, also endorsed the rezoning application. Gauthier noted the site’s proximity to transit and said the younger demographic is tending to choose to get to work by walking, cycling or taking transit.

But three residents from the Sapphire condo building complained the new tower would compromise their privacy because windows and balconies from the new building would look onto their units. One speaker said it would also reduce natural light to units, as well as produce a drop in property value. He said it appeared more consideration was given to how the building might shadow a park two blocks away than to concerns from the Sapphire’s residents.

Another resident said development has exploded since the Olympics, and the impact to people’s health shouldn’t be ignored. She said she doesn’t open her windows or go on to her balcony due to the dust.

“The dust doesn’t settle before the next building starts,” she said.

“There has to be some attention to the fact that, while it’s difficult to quantify what health effects we have, we have to be mindful of how much construction is happening in a concentrated area in a certain period of time when, realistically, this building at 1166 could be redecorated, revamped, with much less impact on our environment.”

“One thing I hope we’re going to talk more and more about at council is the impact of economics, as it relates to affordability, and having quality jobs and economic drivers in order for people to be able to afford to live in the city,” she said. “It’s particularly striking that we’re battling Toronto for the No. 1 lowest vacancy rate…”

While she was “sensitive” to Sapphire residents’ concerns, she said council had to weigh all the input and look at the greater public good.

Kirby-Yung also mentioned the value of the public benefits stemming from the project, which total more than $10 million, and called attention to the new building’s design.

She said it’s “not another flat planed-type of box but it does have some uniqueness to the design.

“When we’re building a city, I’m always hopeful we can marry form and function and we’re not just putting in the desired uses but we’re also doing it in a way that we’re building something of architectural interest in the city,” she said. 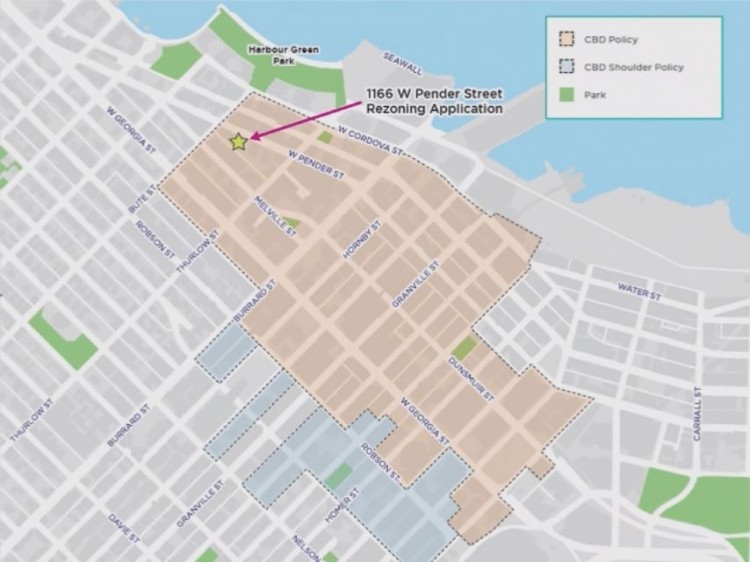 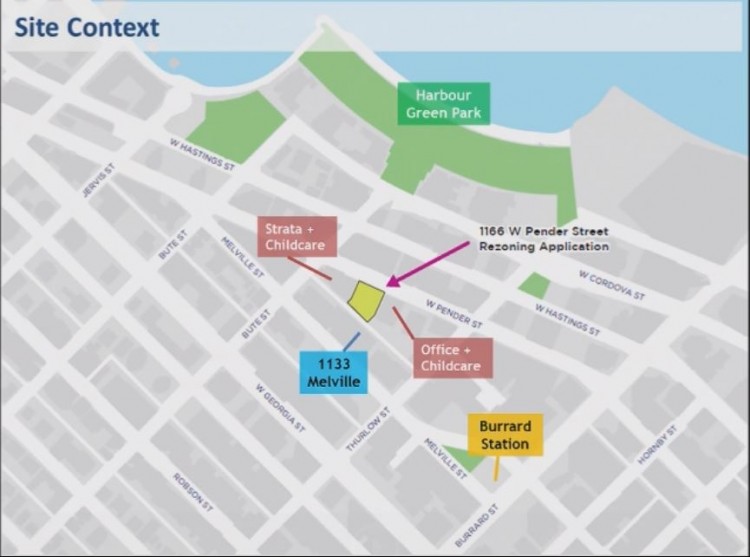 The context of the development site at 1166 Pender St.