Innovative technology is the answer for bricks-and-mortar store owners seeking to lure shoppers bedazzled by the ease of online shopping.

It can engage customers and be a fun distraction, such as at the Sport Chek on Robson Street, where a hologram has been on display to create the illusion that a running shoe is on fire.

Technology can also enhance the in-store shopping experience and help customers be sure that they are buying exactly what they want.

“My challenge to the team was: how do we take 80,000 square feet of merchandise and put it in a 15,000-square-foot store?” said Mike Walsh, president of the Leon’s division at Leon’s Furniture Ltd. (TSX:LNF). Leon’s Furniture also has divisions such as the Brick.

Walsh explained that when he sought new technology, the priority was on innovations that had a practical purpose.

“It wasn’t necessarily about the sizzle,” he said. “It was more about the shopping experience.”

One of the innovations at Walsh’s two-month-old store on Coquitlam’s United Boulevard is a giant wall screen composed of nine 46-inch flat-screen televisions. About 10 feet away from the wall is an iPad that customers can use to manipulate the large wall screen.

They can, for example, project life-size versions of Leon’s merchandise, such as sofas, in every available colour. 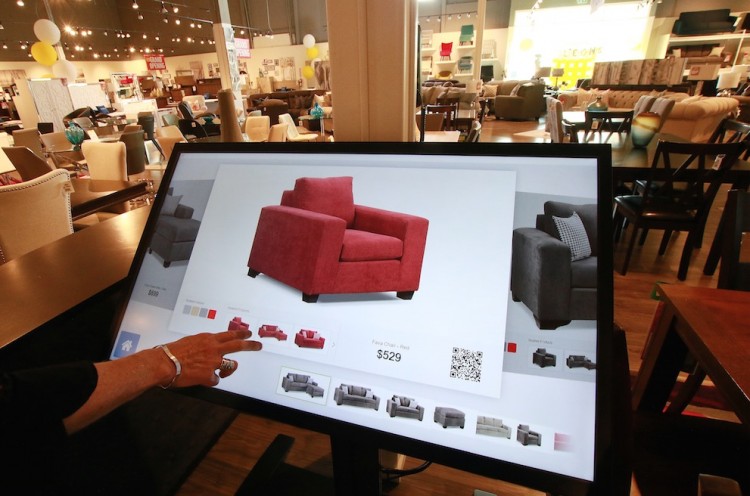 (Image: Leon's shoppers can view a range of colour options for products such as sofas | Rob Kruyt)

They can also use a separate iPad that is equipped with an app Leon’s developed that enables augmented reality. Shoppers could, for instance, use the device to see the digital image of a table superimposed on the real-world background.

This way, the customer could see if the table looks good next to a sofa that they intend to buy.

“They can put [the table] upside down or spin it around on the app,” Walsh explained.

About 40% of the chain’s merchandise is available in the augmented-reality app, and Walsh said that his goal is to have all Leon’s products in the app by next February.

Another innovation likely next year is an app that can show a room’s dimensions and enable people to place items from the store in that room’s floor plan.

Other advances are aimed at buoying the efficient operation of the store.

Electronic price tags, for example, cut down on paper and toner-cartridge use but, more importantly, staff do not need to spend time changing prices. 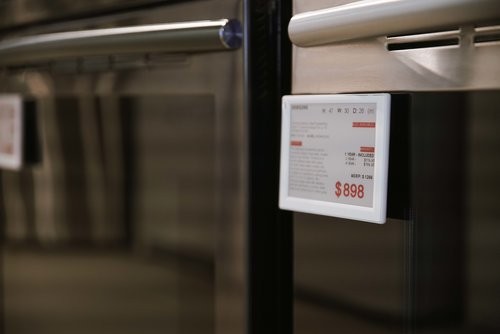 Prices on all tags can be changed instantaneously from a central location – an advance means that they can be changed more frequently, and can free up employee time to help customers. Walsh stressed that the efficiency created by the tags will not mean the store will cut back on the number of hours employees work.

Retail Insider Ltd. owner and analyst Craig Patterson was wowed by the innovations at Leon’s and said that technology is at its best not only when it creates a more fun shopping experience but also when it helps customers be sure they are buying the right products.

“It’s not enough to have a fancy, cool screen,” he said. “There has to be a strategy and a conceptualization behind why they are doing it.”

Indeed, the 15,000-square-foot store in Coquitlam is the smallest one in the chain.

As such, Patterson said, it makes sense for the chain  to use technology as much as possible in the store to try to provide a clear idea of what its products look like to consumers. That way the experience will be as fulfilling as in its larger spaces, Patterson said.

Other retailers upping their tech game

Though it may be seen by some as the stodgy, bricks-and-mortar equivalent to online giant Amazon.com (Nasdaq:AMZN), Walmart (NYSE:WMT) recently upped its game by having stores that offer a shopping experience like that of Amazon Go stores.

Shoppers at a new Walmart in Toronto can use their smartphones to scan QR codes on items as they are shopping, which automatically adds the item to their bill. They can then walk out of the store without having to go to a cashier or a self-serve kiosk, Patterson said.

The result is similar to the way Leon’s enables shoppers to envision how a table will look next to a sofa. MEC customers can use the iPad app at the new Toronto store to view MEC’s entire tent inventory and see products in different environments.

The company is looking into the possibility of providing the technology on public app stores and to also allow customers to make purchases with their smartphones.

Finally, fashion retailer Reformation is also investing in technology to make it easier for its target shoppers – young women – to get products they want.

Patterson expects Reformation to open in Vancouver in 2020, although the chain has yet to announce its plans for the city.

Some of its U.S. stores have wall-mounted screens that shoppers can tap to select clothing items they would like to try on. They then get an estimate of how long the wait will be at a changing room.

Similar technology is in the changing rooms. •