By Glen Korstrom | August 22, 2019, 4:20pm
Pernilla Vancouver Goldsmith artist and retaier Pernilla Ahrnstedt would have liked to have seen a small business owner and someone who has made a living from art be on the new council | Pernilla Ahrnstedt

A day after Canada Mortgage and Housing Corp. (CMHC) released the names of people who were selected to sit on the new and influential Granville Island Council, the knives have come out from entrepreneurs on the island in the arts and culinary sectors.

They are mad that no one on the seven-member body is a small business owner or someone who has made their living from creating art or culinary treats.

“It is important to have small business representatives on the council, and there’s also no culinary representation,” said Eric Pateman, who is a principal at the Granville Island restaurant Edible Canada.

“I see Granville Island as an arts and culinary hub.”

Pateman was one of many entrepreneurs on the peninsula who put their names forward for consideration to be on the council. Only one person who heads an organization on the peninsula was selected: Arts Umbrella CEO Paul Larocque.

“The gentleman from Arts Umbrella is great,” Pateman said. “But he runs a government funded non-profit and doesn’t represent the views of the entire island.”

Artists who make and sell products on the peninsula under Granville Bridge that is referred to as an “island,” despite not being one, similarly told Business in Vancouver that they were disappointed with the composition of the council.

“No one on the council has ever – as far as I can tell from their bios – tried to make a full-time living as an artist or artisan,” said Pernilla Ahrnstedt, who for 18 years has operated a goldsmith shop with two other women on the artist strip known as Railspur Alley.

“If they are in the arts, it’s the corporate side, or business. Or Heather Deal, who was in the arts through politics. It looks like it is a very safe council in order for CMHC to keep the boat from rocking.”

Ahrnstedt also put her name forward to potentially be on the council.

She similarly praised Larocque’s presence on the council and echoed Pateman and Ahrnstedt’s concern that there is no small-business person or artisan-sector entrepreneur included. 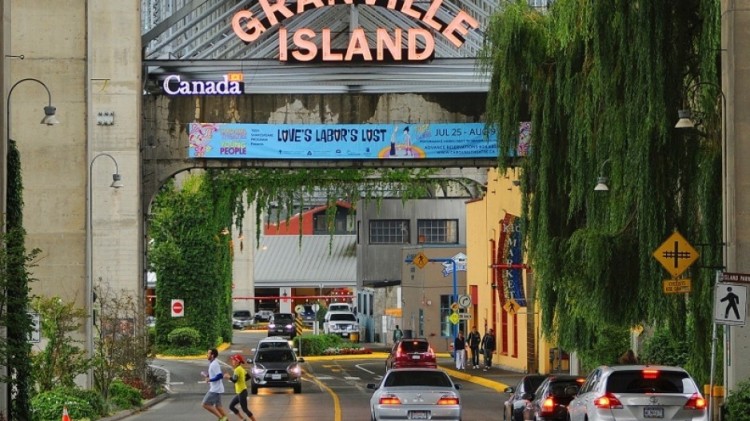 (Image: Granville Island was created as an entity by the federal government in 1972 | Dan Toulgoet/Vancouver Courier)

Aside from Larocque and Deal, “everyone else is an accountant or office person,” Sadryna said. “No one has been in our shoes.”

Sadryna has operated her store for 16 years and remembers when the street was relatively new and the concept behind it was to show the public who the people were who were making custom art pieces, and how they were doing it. The concept for the alley, Sadryna said, was partly that the public would be able to look in windows of stores that were closed.

Between then and now, a different ethic was put in place, one that expected the artists to keep retail-store hours that often find them interrupted frequently by tourists and visitors.

“We have to work night shifts in order to produce goods if we have an order,” she said.

Her fear is that a new business-oriented council will advocate “$5 T-shirt, tourist-oriented places” that would cheapen the image of products on sale on the peninsula.

The seven members of the Granville Island Council are:

•Andeen Yvonne Pitt, a vice-president and partner at the advertising firm Wasserman + Partners. Her bio describes her as a “senior marketing-communications professional;”

•Gracen Chungath, a bureaucrat who is the director of strategic operations in planning and program management at the City of Vancouver’s arts, culture and community services division;

•Heather Deal, a biologist and former city councillor whose bio says that she was the “mayor’s lead on arts and culture;”

•Johanna Lauyanto, the manager of communications and sustainability at the Strathcona Business Improvement Association;

CMHC appointed two members to the council: Caminiti and Lauyanto.

The City of Vancouver appointed one member to the council: Chungath.

The remaining four members of the council were officially selected by Jean-Yves Duclos, Minister of Families, Children and Social Development and minister responsible for CMHC.

In reality, the selections came from a nominating committee that included:

•Sadhu Johnston, manager at the City of Vancouver and a Granville Island 2040 Implementation Committee representative;

•Linda Morris, CMHC board member; and

BIV tried to get explanations for why members appointed to the council were chosen.

Neither CMHC nor nominating committee chair Shakell responded to BIV by press time. The City of Vancouver responded in an email to say that Chungath’s bio spoke for itself and that the nomination committee approved her appointment.

One of the council’s first orders of business will be to evaluate and recommend candidates to fill the role of general manager of CMHC-Granville Island – a post that comes with a salary somewhere in the curiously precise range of between $141,479.63 and $176,849.54, according to CMHC.

“Council members do not receive a salary but are remunerated on a per-diem basis, in such amounts as are approved by CMHC from time to time and reflected in the council operational budget, up to a maximum of $400 per day,” CMHC told BIV in an email.

News of the new council prompted some criticism on Twitter.

Mike Klassen, a former Non-Partisan Association (NPA) candidate for Vancouver city council and operative of former NPA Mayor Sam Sullivan, as well as a columnist at the Vancouver Courier, which is a sister publication to BIV, was not pleased that former Vision Vancouver councillor Deal was appointed because he views her as being "partisan."

“Surprised that someone with such a long track record in highly partisan politics as Deal landed on that board. Notwithstanding her public service, it's far too soon since she held office,” Klassen wrote on Twitter.

He added that there are many people with a passion for the arts and distinguished backgrounds.

“That someone did not consider she had held public office less than 12 months ago is a fault of the appointment process,” Klassen wrote. “A two-to-three year timeout from elected office is more appropriate…. As a matter of policy, no one who has held office as recently as that should be appointed to govern a significant public civic asset so soon. It was a mistake, and should be acknowledged as such.”

BIV asked Klassen what conflict Deal could be put in, given that Granville Island is managed by the federal government and not the City of Vancouver.

Klassen did not provide an answer, but replied, “We should not even have to be asking that question.”

In 2014, however, BIV reported that former Vancouver Mayor Gregor Robertson wanted to have the city step in and manage Granville Island. That was when there were rumours that CMHC planned to pass operational control over the peninsula to the regional Metro Vancouver authority.

BIV sent Deal a direct message on Twitter to get her perspective on Klassen’s concern but did not immediately get a response.

Others on Twitter, such as cycling advocate Richard Campbell, expressed optimism that the new council could make Granville Island car-free – a proposal that none of the business owners on the peninsula who spoke to BIV supported.

Walk Metro Vancouver director Sandy James said on Twitter that she hoped that the new council would “strive towards an active transportation and streetcar model as vehicular parking is the largest land use on the island.” 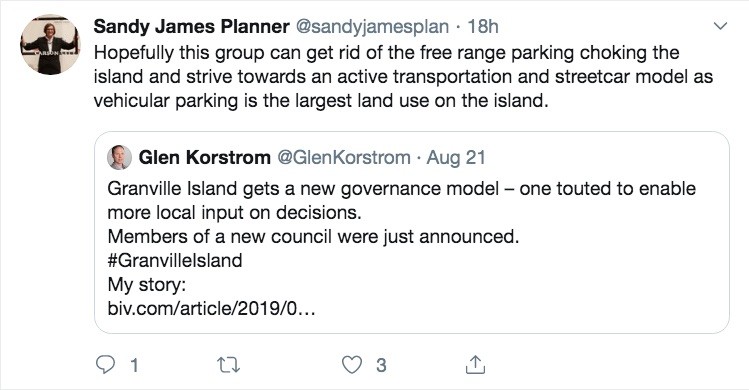 The artist entrepreneurs Ahrnstedt and Sadryna both agreed that they would like to see a return of the streetcar to the area.