A wholly owned subsidiary of Enbridge Inc. is proposing to construct and operate the Frontier project, which would include a new natural gas liquids (NGL) straddle plant and NGL pipeline in northeastern British Columbia.

“The estimated capital cost is in development and is highly reliant on the final selected route, and pipeline and plant design,” Enbridge said in its project description document.

“At this early stage, capital costs for the project are estimated to be in the range of $2.5 billion. Annual operating costs are predicted to range from $25 million to $50 million per year.”

The plant will have an initial capacity of approximately one to 1.5 bcf/d. In addition to the proposed straddle plant, initiating pump station, and pipeline, Enbridge said the project would require an electricity transmission line to the straddle plant.

It is anticipated that the transmission line will be approximately 15 to 45 kilometres long based on a radius to reasonable sources of power in the area. The transmission line location is currently being considered through completion of a power system study to determine potential tie-in locations.

The project is investigating tying into 230-kilovolt power systems to the northwest and northeast of the straddle plant and initiating pump station location. Design for the transmission line is tied to the design load requirements for the facility which will be determined during front-end engineering design (FEED). 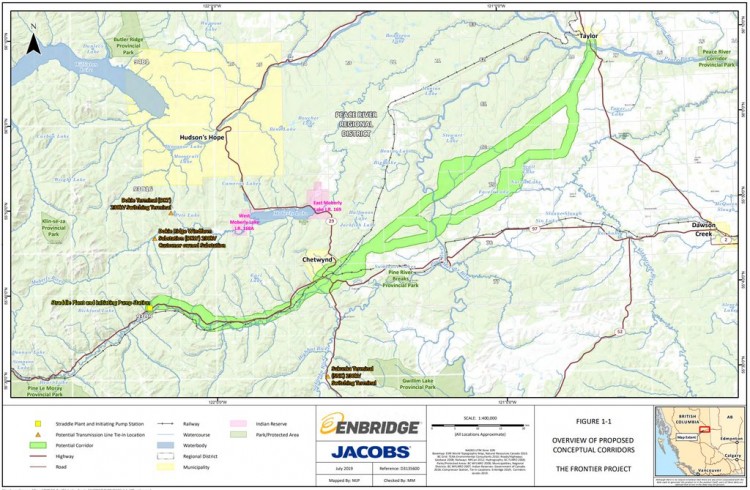 Temporary infrastructure will be required during construction (such as, access roads, temporary bridges, stockpile sites, borrow sites, contractor yards, and construction camps). The proposed pipeline has a delivering capacity of approximately 16,000 cubic metres per day.

Project design is currently in the conceptual stage. The first phase of FEED for the project is scheduled to commence in Q3 2019.

Enbridge said the dominance of NGL production from gas processing is “evident and is expected to remain such for the foreseeable future.”

Currently, B.C. produces approximately 10 per cent of the NGL in Western Canada, with the remaining 90 per cent produced in Alberta, and uses a fraction of those as compared to the rest of Canada.

At the moment, there is only one straddle plant in B.C. as compared to eight in Alberta. As such, the project offers an opportunity to source NGL locally to the B.C. market to meet increasing demand. In addition to meeting NGL demand, the nature of the gas supplies in Western Canada has evolved over time such that natural gas has an increasing heat content as the reservoir pressure drops. Over time, the heat content could potentially increase to a level where it is off specification and unfit for distribution.

“The straddle plant will proactively remove NGLs from the transmission system, lowering heat content and maintaining gas specification, without impacting the continued safe operations of these systems. The straddle plant would be able to process up to an estimated 1.5 bcf/d of gas and extract NGLs from existing natural gas pipeline systems,” Enbridge said.

According to Enbridge, the project is expected to provide in the range of 1,200 to 1,400 person years of employment during design and construction, and approximately 30 to 50 permanent jobs during the operational life of the project.