New-home sector mirrors resale market with unexpected uplift in absorption, finds MLA Advisory – but this is likely lack of supply rather than higher sales

If you thought the unanticipated uplift in Lower Mainland home resales last month was an anomaly, consider this: the slumping presale sector also seemed to experience a transaction surge in July compared with previous months.

According to MLA Advisory’s July report, 37% of the presale units released in July were sold that same month. This is still relatively low by the standards of the past few years, but a marked jump from the 14% seen in June 2019, or the 20% typical of earlier in the spring.

However, across the entire Lower Mainland (Metro Vancouver and the Fraser Valley), there were just four projects released in July, totalling 157 units. That compares with 10 projects released in June 2019, comprising 531 homes – which accounts for the month-over-month disparity in the percentage absorption rates. In fact, calculating actual sales from the take-up rates, July saw slightly fewer presale purchases than June.

MLA Advisory, the research arm of real estate marketing company MLA Canada, predicts there will be seven projects comprising 603 homes released in August – the absorption rate of which will be a better indicator of activity.

Suzana Goncalves, partner and executive vice-president of sales and marketing at MLA Canada, said “The bright spots in the market continues to show us that well-conceived homes priced competitively and providing value to end users in their markets remain active. Developer reputation, location including proximity to transit or arterial routes, and strong utility within price ceilings are all top of mind factors for today’s buyers.” 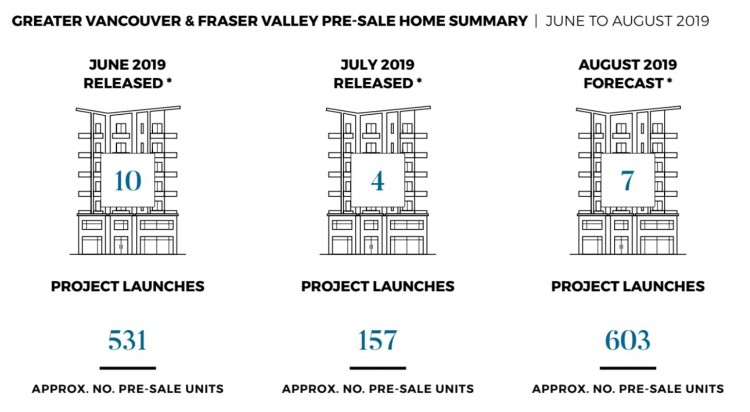