At least 19 Metro Vancouver developments have been postponed or mothballed

By Glen Korstrom | August 13, 2019, 8:08am
Holborn Group of Cos. has put redevelopment on hold at the Bay parkade on Seymour Street | Chung Chow

Metro Vancouver’s sluggish residential real estate market has caused some developers to pull the plug on projects, while others either delay or “retool” housing developments or switch their firms’ focus to rental housing.

Pre-sale homebuyers at Richmond’s Alfa condominium project were left in the lurch in July when developer Anderson Square Holdings Ltd. sent them notices to say that it was cancelling their contracts for units in the under-construction building because the developer was “facing serious and significant circumstances beyond its reasonable control.”

Construction company Scott Construction then told its subcontractors to stop working on the Alfa.

Anderson’s executives were not available to comment on the decision to halt the Alfa project, but developers across the region are grappling with a sluggish housing market.

"The market is totally in the dumps right now,” said Holborn Group of Cos. CEO Joo Kim Tiah. “I don’t think people are aware or have a full grasp of what is going on. The B.C. economy is headed for tough times. The real estate economy is not going good.”

One project indefinitely on hold is the redevelopment of the Bay parkade on Seymour Street – a site that is connected to the Bay department store by a skywalk above the street. Tiah’s family owns most of the block bounded by West Georgia, Seymour, Dunsmuir and Richards streets, and he has been eyeing redeveloping that land for years.

He told Business in Vancouver that he plans to keep his commitment to build a social-housing building at 155 East 37th Avenue, on a 15-acre site that his company owns in Vancouver’s Little Mountain neighbourhood. Market condominium towers on the site, however, are delayed.

“I was hoping to bring [market housing in Little Mountain] to market in the spring of next year but it is now looking hopefully to be in the fall,” he said. “I don’t want the market to tank even further or to go even worse.” 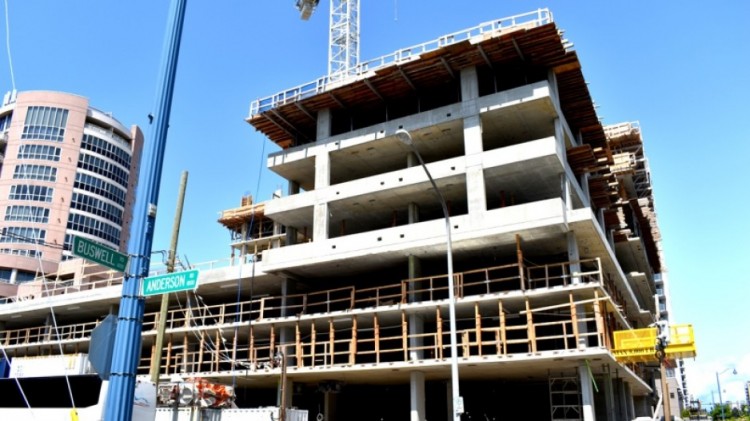 Tiah blames the slowdown on taxes, including the longtime property transfer tax and the goods and services tax and new levies.

One new tax is the B.C. government’s 20% charge to foreign buyers who purchase homes in certain parts of the province, including the Lower Mainland. Another is its so-called “speculation tax,” which is levied on second homes in certain regions of the province. For Canadian citizens and permanent residents the tax on second homes in the province is 1% on the value of the home above $400,000. For non-citizens, and what B.C. Finance Minister Carole James calls “satellite families,” the second-home tax rate is 2% on the value that exceeds $400,000.

The City of Vancouver separately has an empty-homes tax that is 1% of the property’s value.

“Why would investors, or anyone, even want to invest in B.C. anymore?” Tiah asked. “The yields are so low and the taxes that you pay on an annual basis are higher than the yields are.”

Tiah said he fears that developers across the province will have to start laying off staff.

The good news, however, is that there was a 23.5% bump in the region’s home sales in July, compared with the same month a year ago, although sales in every other month this year have been below the pace set last year. Even in July, sales were 7.8% below the 10-year sales average for that month, according to the Real Estate Board of Greater Vancouver.

Altus Group vice-president Matthew Boukall told BIV that his company is tracking at least 19 Metro Vancouver projects that were supposed to launch either in late 2018 or in early 2019 and that have either delayed their opening date or shifted their marketing message to be “coming soon.”

Out of those projects, at least four have either approved or conditionally approved development permits, he said.

Not all projects are struggling in the current market.

Beedie Living managing partner Rob Fiorvento told BIV that his company sold about 80% of the 39 homes at its Storia development in Burnaby in the two weeks after pre-sales launched July 13.

The development may owe its success to its many larger three-bedroom condos, he said.

Even Beedie has one project that is delayed, however. It had planned to launch pre-sales for its Slate development at Brentwood in September and has pushed that back to early next year.

The solution for some developers has been to pivot their businesses toward purpose-built rental housing.

Coromandel Properties, for example, has primarily built condominiums but plans to develop rental buildings on 41st Avenue near Oakridge.

“In 2016, we became uncomfortable with the home values that were being achieved for condominium product,” said Cressey executive vice-president Hani Lammam.

“We felt it was unsustainable so we shifted our business model at that time to do more rental and more office product, and to step away from condominiums.” 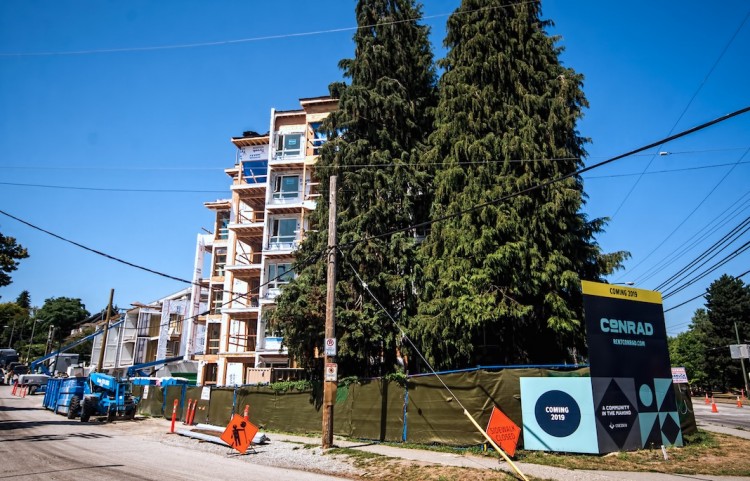 The result is that Cressey’s Conrad rental building at 3365 Commercial Drive is well underway, and the company just started building its Wilkinson project at 1715 Cook Street in the Olympic Village neighbourhood. The City of North Vancouver also provides incentives for developers to build rental apartments, and Lammam said that Cressey is going through a rezoning process for a potential rental project on West Esplanade. •