Beyond meat: How a Vancouver restaurant named for an animal honours every ingredient, every eater

Four vegans walk into a restaurant named for an animal – and known for serving meat-centric dishes.

It’s not the set up for a joke, it’s a real scenario Head Chef Ian McHale faced one night recently at Vancouver restaurant Wildebeest, and one he handled with great pleasure, creating fully plant-based tasting menus on the fly for the diners at four different tables, who had each come in with their omnivorous friends.

The messaging across global platforms has become increasingly clear of late: We’d likely all do better for our health and the planet by eating more plants and less meat. While for some this means eschewing animal products completely, for others, it means being much choosier with the animal proteins we do include in our diet, and making sure our meats come from reputable sources. 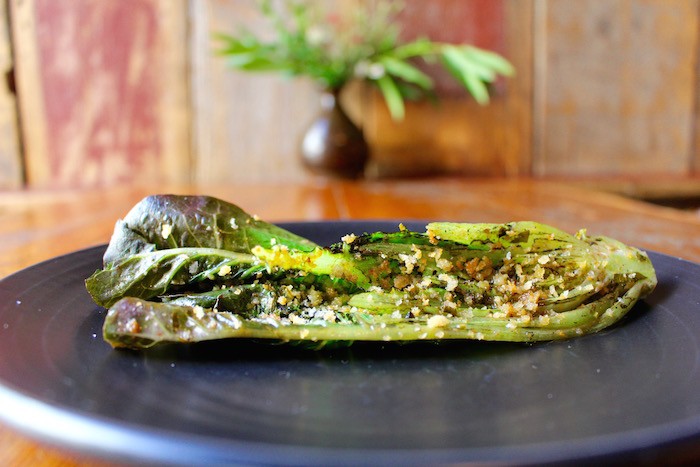 Wildebeest, is a case study, then, in incredibly creative “use it all up” practices in the kitchen.

As equally enamoured with his suppliers, whether they’re bringing in meat or produce, McHale and his team operate under a mandate that every ingredient that comes through their doors can have a primary, secondary, even tertiary use.

When it comes to meat, McHale – who says he tends to eat vegetarian on most of his days off – is of the school of “not all meat is bad,” but rather “it’s about how it’s prepared and where it’s from.”

And it’s also about not being wasteful.

To that end, McHale says at Wildebeest, they make a point to step away from the more commercially popular cuts of meat, focusing instead on “the garbage cuts that one else wants to eat.” So you’ll find a bison tongue dish on the Wildebeest menu.

Right now you’ll also find a very special Farmers’ Harvest menu that’s like a crash course in Wildebeest’s wildly inventive “closed loop” approach to ingredients. There are the products of about 10 different farmers represented, as well as fish and meat ingredients that are being used in numerous ways – including some that are the byproducts of other dishes or that came in the Wildebeest doors several months ago before being preserved or cured in preparation for future use. 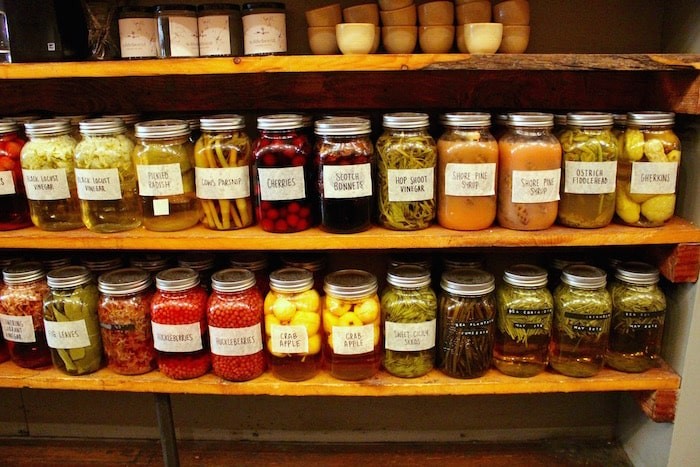 Every season of the year in B.C. ingredients is represented on the shelves of Wildebeest. Photo by Lindsay William-Ross/Vancouver Is Awesome

The Harvest Menu is what McHale calls a “blip” of their regular menu, which itself is abundant in its representation of regional ingredients and sustainable cooking. Their riff on a Caesar salad is a slab of baby gem lettuce that features a bone marrow gremolata (an Italian herb sauce) made from bone marrow left over from proteins cooked earlier for other dishes. It also stars something called a “herring garum,” a garum being a Roman fermented fish sauce, in this case the fish being 300 pounds of herring brought into the restaurant earlier in the year. Listed simply as “lemon” on the menu, what’s actually being deployed is the results of fermenting the burnt husks of lemon left over from being used in cocktails at Wildebeest’s acclaimed bar.

And that’s just the salad. And really, that’s what you’re meant to experience: A simple salad that happens to showcase a realm of techniques and ingredients that squeeze every drop of what the vegetable or animal have to offer.

To McHale and the Wildebeest team, this is a mindset that means gambling on curious preparations that sound a bit like a mad scientist’s experiments, like creating a “corn husk stock” out of the roasted exterior leaves of the cob that most of us shuck and abandon to our compost bins or the box the store has set out next to the bin of fresh ears.

What you get, instead, is a creamy, richly corn-flavoured velouté that you can trail a plump, tender piece of sweet corn puree-filled handmade agnolotti in, while tiny fragments of corn have been turned into what you’ll swear are bacon bits. But no – this dish is wholly vegetarian. 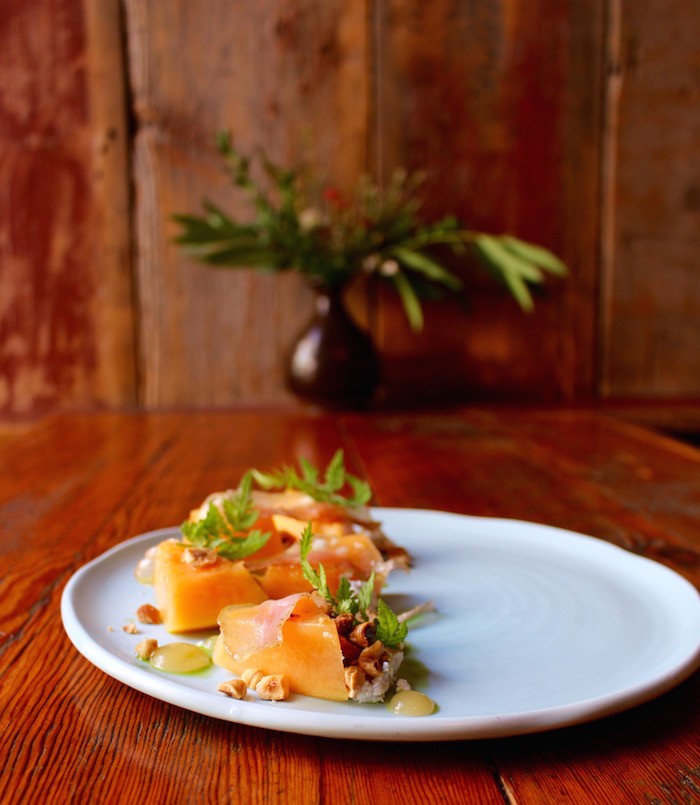 Charentais Melon at Wildebeest. Photo by Lindsay William-Ross/Vancouver Is Awesome

Guanciale used in one dish on this menu was made four months prior, and McHale explains that they cure a tremendous amount of meat product in-house to not only get the most out of each morsel, but also in order to conserve storage space in the restaurant. While they may use the “primal” cuts right away, they’re also immediately beginning the curing the process, knowing those products will be ready to use a week or two – or many more – down the line.

That’s why McHale is already thinking in September about what he may serve up for Dine Out Vancouver come January, or Valentine’s Day next year.

Chances are, you’ll be tucking into your Sweetcorn Agnolotti or Rangeland Bison dish with a view of some of Wildebeest’s massive larder – the restaurant shelves are groaning with jars of neatly-labelled products, some with names that sound like they belong to an old apothecary.

“We have the larder of B.C., of everything B.C. has to offer,” explains McHale. “We have every season here.”

He points out some delicious curiosities that are sitting in wait, from mushrooms to milk caps, to an array of “tree tips.” 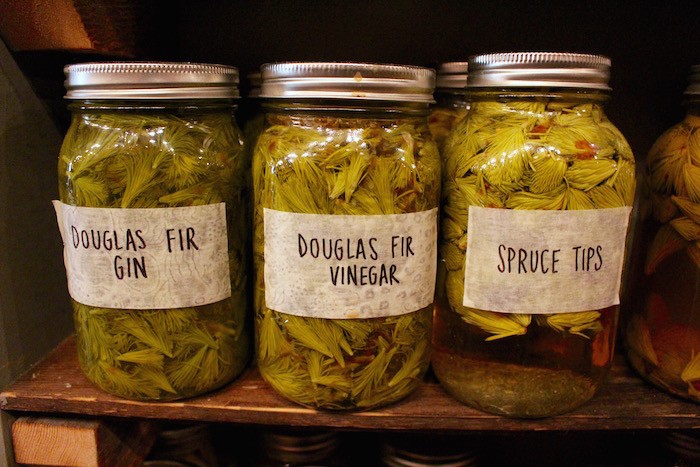 Douglas Fir and Spruce tree tips get a new lease on life at Wildebeest. Photo by Lindsay William-Ross/Vancouver Is Awesome

How do you even come to have a supply of tree tips, let alone know what to do with them?

“You gotta know a guy,” says McHale, laughing. He’s not joking, though. He’s talking about Lance Staples, a forager who works with Wildebeest.

McHale will then preserve some Douglas Fir Cones in vinegar, while some gets turned into a salt that they use to season their lamb.

We’ve come back to meat, with the mention of lamb, but that isn’t where McHale and Wildebeest want to leave us. The chef says he finds it “challenging and interesting” on any given night to be asked to “put down the butter and cheese” and turn to what he has in stock that will work for a plant-based diet, and to make good use of what they have their fingertips. After all, making the best use of what they have is the core operative of what they do, period.

“Yes there is some stigma about the name ‘Wildebeest,'” admits McHale, “but that’s matter of fact not what were doing at all.”

As groups of friends, relatives, or couples decide where to go for a nice meal out in Vancouver, McHale wants to make sure no one is ruling out Wildebeest because of any “meaty” preconceptions. Plant-based eaters can easily eat there alongside omnivorous companions, no discussion necessary.

“We will take care of you no matter what,” adds McHale. “That’s why we’re in this, to make people happy.”

The Farmers’ Harvest menu is available at Wildebeest through September 19, 2019. Wildebeest is located at 120 West Hastings Street in Vancouver’s Gastown.