By Glen Korstrom | September 24, 2019, 8:08am
Clearly CEO Arnaud Bussieres is eyeing discount promotions as a way to fuel growth at the eyewear retailer | Chung Chow

This comes after about five years of sales treading water since French lens manufacturer Essilor spent about $430 million to acquire the e-commerce darling officially known as Coastal Contacts Inc.

What is different this time around is that the company is profitable, said Arnaud Bussieres, who has been CEO for nearly two years of what is now branded Clearly.

The key to reigniting growth is to again offer low-cost promotions, he said. Another change is that Bussieres expects to add between three and five bricks-and-mortar stores to the chain’s current three locations by the end of 2020. Other store expansion will follow.

His predecessor as CEO, Roy Hessel, chose not to open any physical stores. He also chose to offer fewer promotions and thereby “broke the engine” of growth, Bussieres said. Hessel also got rid of initiatives that helped attract new customers, such as a promotion to get a first pair of glasses free – a deal that meant the only costs to the customer were shipping and extras such as an anti-glare finish or a scratch-proof coating.

Bussieres called the first-pair-free promotion, which was the brainchild of founder Roger Hardy, “brilliant,” and he hinted that he may bring it back.

Bussieres will have his work cut out for him to achieve sales-growth goals in part because of new competition from Hardy, who along with family members netted about $86 million from selling Coastal Contacts.

Hardy purchased Richmond’s LD Vision in April, and he told Business in Vancouver to expect some big things from a new division that he dubs Kits.com.

Coastal Contacts generated $217.6 million in sales and had a $15.9 million net loss in 2013, in its last year-end earnings report, when it was listed on the Toronto and Nasdaq stock exchanges. It was forecasting 2014 revenue in the $250 million range.

Bussieres told BIV that his division of what is now EssilorLuxottica generates much less revenue – about $175 million – but he projects that he will increase sales about 14% to $200 million next year. The big thing, he said, is that the company is now profitable, clearing $10 million in the 2019 calendar year.

He explained that it is hard to compare the two businesses because so much has changed. 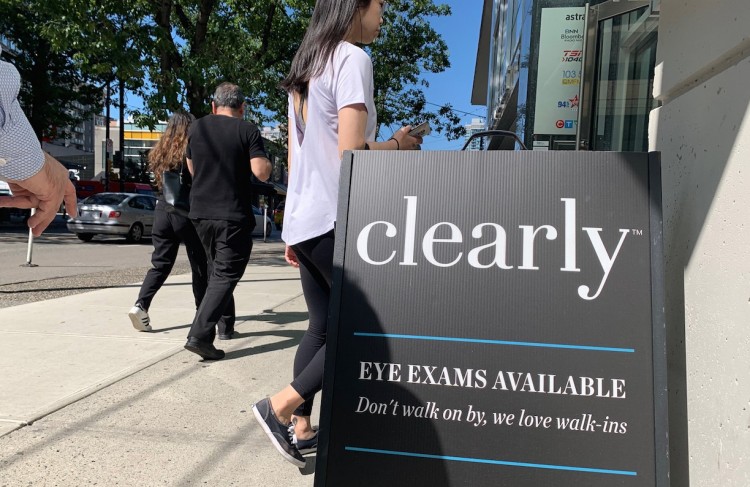 The company’s parent is now EssilorLuxottica, thanks to a 2018 merger between Essilor and Italian frame-maker Luxottica in a 49 billion euro ($71.2 billion) pact.

That parent has expanded e-commerce operations around the world and hived them off into different reporting structures that are all overseen by global e-commerce president Bernhard Nuesser, Bussieres said.

He has made small acquisitions such as the recent purchase of Australia’s OzContacts, which he is folding into the Clearly banner.

Canada represents about 65% of Clearly’s sales, while 25% are in the U.S. and the rest are in Australia, he said.

While the lion’s share of the former Coastal Contacts’ revenue has stayed within the division, most of its workers have not.

Coastal Contacts had about 700 staff in 2014, according to Hardy. The division that Bussieres oversees – without Lensway – employs only 270 workers, including 250 in Vancouver.

Hessel embarked on several rounds of layoffs and outsourced customer support and some production to the lower-cost jurisdiction of India.

“We, as part of EssilorLuxottica, have access to the world’s largest network of manufacturing and supply chain, so we piggyback on that,” Bussieres said of the move to India.

Some Clearly manufacturing continues to take place at the company’s longtime lab in East Vancouver. The new office in downtown Vancouver employs software developers, technical support workers and some marketers.

Bussieres wanted to locate an office downtown because he thought that it would be easier to recruit technology workers – something he continues to do.

He wants to make Clearly chiefly a technology company even though he has been reluctant to move too quickly into new areas, such as facilitating online eye exams that customers can conduct with smartphones. He said that he doesn’t think that technology is good enough yet.

The previous Coastal Contacts, he said, made marketing too much of its focus.

The 32-year-old has also pushed for a more relaxed corporate culture – similar to that of a tech company. Dressed in a casual shirt and slacks, he joked on a warm late-summer day that he dressed up for the interview.