Workers at the Hyatt Regency, Westin Bayshore and Pinnacle Hotel Harbourside are indefinitely on strike

By Glen Korstrom | September 19, 2019, 5:20pm
A line-up of people wait to speak to Hyatt Regency managers who were manning the front desk because their employees are on strike | Glen Korstrom

A megaphone blasting a police siren into the front driveway of the Hyatt Regency while union organizers clanged cowbells and striking workers chanted while carrying picket signs was not what guests and corporate clients of the downtown Vancouver hotel expected to find September 19.

But that is exactly what they got.

Hundreds of workers at the Hyatt Regency, Westin Bayshore and Pinnacle Hotel Harbourfront walked off the job at 7 a.m. and went on strike. Pickets were set up in front of each of those three hotels. Workers at the three hotels have been without a contract since mid-2018.

"It was a surprise to see," Travis Bowman, executive director and founder of Environmental Workshops, LLC, told Business in Vancouver.

He had arrived yesterday from his home in Charlotte, North Carolina and stayed at an Airbnb in East Vancouver because he said the $100-per-night cost was a fraction of that charged by hotels in the downtown core.

He arrived at the Hyatt with his team in the morning and had the shock of seeing picketing workers outside. Managers at the hotel were helpful, he said, and his workshops proceeded with little disruption. His team were in town for a one-day session using meeting rooms on the Hyatt's 34th floor to train locals on how to remediate buildings in an environmentally sustainable way.

Down at ground level the lobby was crowded with people sitting on sofas next to their luggage. A line-up of  15 people stood waiting in a line to check in.

"We're going on a cruise to Hawaii tomorrow and came a day early so we would have plenty of time," Tom Trebitz, from Boca Raton, Florida, told BIV while he was waiting in line. It was about 4:20 p.m. and he had been waiting for a room since about 2 p.m. Managers had told him that he would be guaranteed a room by 4 p.m. but that had not occurred so he was waiting to get an update. 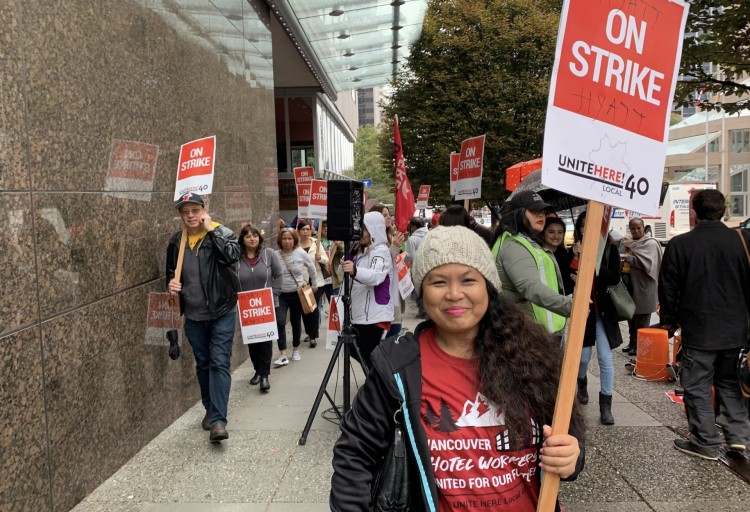 (Image: Hyatt Regency room attendant Nadine Abenes carries a picket sign along with co-workers on the first day of the Unite Here Local 40 strike at the downtown hotel | Glen Korstrom)

Trebitz had not been told of any discount on his reservation, but one person who was part of a group of two men and two women from Idaho – none of whom wanted to provide their names – told BIV that after some back-and-forth with hotel representatives, a manager had suggested that they would get a 75% discount on their three-night stay because of the inconvenience. They did not yet, however, have a room and they were wondering if they should go to a restaurant and come back later in order to get their room confirmed.

One couple from Japan, who were carrying bags to their room, spoke to BIV and said that they were not provided with a discount and they did not ask for one. They also did not want to provide their names.

"Hyatt Regency Vancouver is disappointed that Unite Here [Local 40] elected to call a strike while negotiations continued," the Hyatt hotel chain's vice-president of labor relations for the Americas, Michael D'Angelo told BIV in a statement late in the afternoon of September 19.

"Hyatt has a long history of strong labor relations, and Hyatt Regency Vancouver remains willing to meet at the negotiating table, but the union does not share the same interest."

Unite Here Local 40 spokesperson Sharan Pawa said that picketing would continue into the evening and will continue daily.

"Under our agreement, the hotel management cannot bring in new staff to do the work to replace the unionized staff," she said. "There should not be the same level of service at these hotels because the workers do the cleaning, the cooking and the help at the front desk. They're not there."

BIV spoke with Hyatt Regency employees who carried pickets outside the entrance and they confirmed that the people who were helping guests at the front desk and helping to move luggage were managers at the hotel. Some people who were pushing carts carrying water jugs on the conference-floor level also told BIV that they were managers but they did not want to provide their names.

Today's escalation in job action follows a noon-hour strike outside the Hyatt on September 17. That job action also included some workers from the Hotel Georgia.

Hotel Georgia workers are in the same union, Unite Here Local 40, but are in a different bargaining collective and so far have not gone on strike. They have been without a contract since January 1, or about six months less than the other workers.

Hotel Georgia workers have already voted to provide strike notice and therefore could go on strike at any time. BIV has made multiple calls and emails to the director of sales and marketing at the Hotel Georgia, and left a voicemail for the hotel manager but has yet to receive a response.

Pawa said that there is a possibility of a lock out at the Hotel Georgia but so far operations at that hotel are business as usual.

A fifth high-end hotel in downtown Vancouver, the Four Seasons Hotel, has workers that are also without a contract. Those workers are not planning to strike, however, because the hotel is set to close in January.

This is all happening in a climate where Vancouver is lacking hotel rooms.

BIV last month examined the phenomenon of the depleted number of hotel rooms in the city.