SkyTrain system expansion to connect to current Millennium Line, which flows into the Evergreen line

By Glen Korstrom | September 18, 2019, 11:12am
The expanded subway will speed commutes for those who work in the Broadway corridor| Rob Kruyt

What happened: TransLink on September 18 revealed locations for the six underground stations on the future 5.7 kilometre SkyTrain extension that will go under Vancouver’s Broadway corridor and connect to the current Millennium Line, which flows to the east into the Evergreen line in Coquitlam.

Why this matters: Businesses that operate near stations, and those who own nearby land could benefit from increased traffic, although there could be less above-ground foot traffic as people wait for connections underground at Cambie Street.

Construction on the $2.83-billion extension is set to start next year so operations could launch as early as 2025.

Stations are slated to be at:

•Mount Pleasant – at the southwest corner of Broadway and Main Street. (The intent of this station is to connect the growing business and residential community in Mount Pleasant);

•Broadway-City Hall – will use the existing entrance to the Canada Line at the southeast corner of Broadway and Cambie Street to ensure what TransLink said will be a convenient underground connection between the Millennium and Canada lines. This station can be busy at rush hours so it remains to be seen how smoothly traffic will flow in this station; 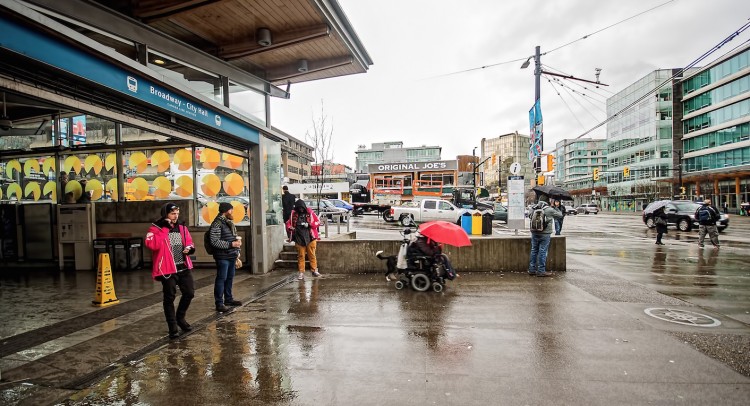 (Image: Broadway-City Hall station at the southeast corner of Broadway and Cambie Street is already congested at rush hour, yet TransLink expects its current entrance to be sufficient for an additional subway line | Rob Kruyt)

•Fairview-VGH – on the southwest corner of Broadway and Laurel Street, near Oak Street. (This location is intended to provide better access to Vancouver General Hospital and the rest of the medical district);

•South Granville – on the northeast corner of Broadway and Granville Street, near South Granville. (This busy intersection is already a major transit hub for B-Line travellers); and

•Arbutus – at the northeast corner of Broadway and Arbutus Street. (This station and bus loop is intended to connect passengers destined for the University of British Columbia (UBC), with B-Line bus service between Arbutus and UBC. It will connect with the Arbutus Greenway.)

The official station names are not yet final, TransLink said.

The station entrance locations were based on what TransLink called a "technical analysis and input from project partners."

This SkyTrain system extension is likely to eventually go to UBC, although money for that is not yet in place.

“The next round of study, which should be completed within a year or so, will be to identify the kind of guideway – whether it is above ground or a tunnelled SkyTrain to UBC,” TransLink CEO Kevin Desmond told Business in Vancouver earlier this month.

In order to be better able to plan ahead, Desmond would like the federal government to have a law that sets out a reliable revenue stream for infrastructure upgrades, he told BIV. That is the way it works in the U.S., where 20% of gas-tax revenue is earmarked for those upgrades, with the remainder going to fund road-infrastructure upgrades.

BIV investigated the state of the region's transportation infrastructure in a story that went online yesterday (September 17). To read that, click here.