Exact costs of new tunnel unknown but will be similar to previously proposed bridge, says Ministry of Transportation. A new environmental assessment will be required.

The endorsement came Wednesday following a presentation by the Ministry of Transportation of alternative crossing options to the previously planned 10-lane bridge, which was scuttled in 2017 by incoming BC NDP Transportation Minister Claire Trevena.

The tunnel connects Delta to Richmond along Highway 99, a major trucking route between Vancouver and the U.S. border. Committee members Delta Mayor George Harvie and Richmond Mayor Malcolm Brodie both said the immersed tube would be a better overall option than a scaled-down eight-lane bridge that would have noise pollution and be a visual eyesore. This is in spite of the fact a new environmental assessment will be needed to dig a new trench in the salmon-bearing Fraser River to accommodate the dropped concrete tubes. Both options would cost about the same, the committee was told.

A third option of a deep bored tunnel (that would bypass any impact to the river) was presented by ministry staff but barely received attention as it was estimated to be four times more expensive (exact costs of all three options were not presented to the committee).

With the endorsement, public consultation is to now take place. Brodie cautioned that the public is at a point of telling politicians to “stop dithering and get it done.”

Prior to the 2017 provincial election, Brodie and Richmond city council opposed the mega-bridge and favoured keeping the existing tunnel and twinning it. Brodie said the province didn’t consult with Richmond or Metro Vancouver regional district to ensure the bridge met sustainability and transportation goals. Trevena scrapped the bridge for that reason.

The previous proposal would have been well under construction at this point. A new immersed tube tunnel will take an estimated eight years to complete from today, according to the ministry.

The new tunnel will consist of three all-purpose lanes plus a dedicated HOV and transit lane each way. Separated bike and walking paths are included.

New Westminster Mayor Jonathan Cote raised the point that the crossing upgrades still must meet the region’s goals of sustainable transportation, including reducing reliance on single-occupancy vehicles. Included in the endorsement was Cote’s motion to improve transit infrastructure along the Highway 99 corridor – something that was included in the initial 10-lane bridge plan.

As it stands, the new tunnel would keep the same amount of all-purpose lanes that are open in one direction during rush hour (when the existing tunnel alternates one lane to the opposite direction) but add the one extra lane dedicated to transit.

BC Liberal MLAs Ian Paton (Delta) and Jas Johal (Richmond-Queensborough East) said the new option will do little to ease congestion and the project delays have been unjustified. Paton said he was shocked such little discussion took place at the committee about the environmental impact of dropping more tubes in the river, as opposed to a bridge that would have no impact on the main channel.

It’s unclear how the new tunnel would impact shipping up and down the river — a concern raised by environmentalists who claimed the 10-lane bridge was favoured to accommodate the further industrialization of the channel (by removing the existing tunnel). A diagram shows the immersed tube tunnel will be 29.5 metres below surface level but does not state if it may facilitate deeper dredging for bigger ships.

Committee member Ken Baird, chief of the Tsawwassen First Nation, was the only person to vote against the endorsement, instead favouring the bridge, which is the quickest proposed solution. Baird stated concerns about disrupting fish habitat.

“Under the new federal Fisheries Act, temporary disturbance to the river would be assessed and will require habitat offsets. The extent of the habitat offsets has not been determined,” noted the ministry’s report to the committee known as the Metro Vancouver Regional District George Massey Crossing Task Force.

Both the old and new proposed crossings make no mention of improving or adding traffic crossings north of the river. 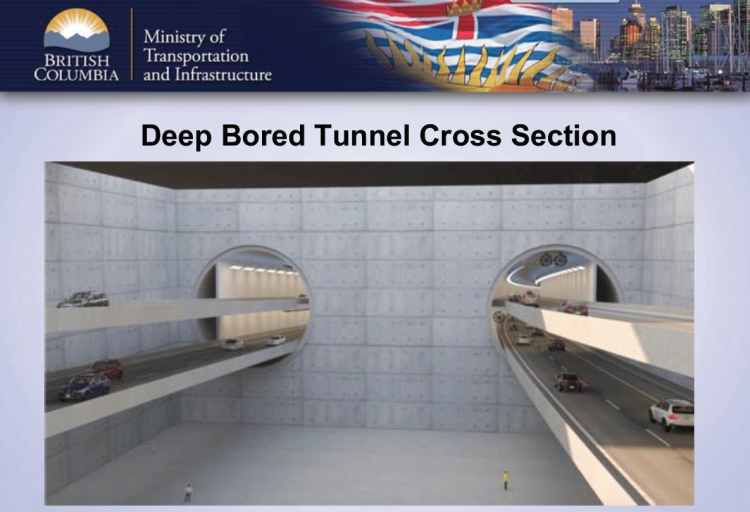 “We’re just moving them ahead to the next road block,” noted White Rock Mayor Darryl Walker, who also favoured the new tunnel. (The Oak Street bottleneck has been a long-standing concern of Brodie.)

Even the 10-lane bridge would become a bottleneck in 2045, the ministry has previously noted. That bridge plan had stated light-rail could be accommodated in the future but details were scant. Likewise, there was no discussion about adding light rail to the corridor with the new tunnel. Discussion was limited to rapid bus service.

It’s unknown what will happen to the existing tunnel under the new proposal other than it will not be used for transportation. Committee members came to the determination that costly repairs for seismic upgrades and better flood protection to extend the tunnel’s life to up to 50 more years would nevertheless leave the region with the need to replace it before any new crossing ages out.