More density sought with new SkyTrain extension on the way

By Graeme Wood | October 29, 2019, 4:19pm
The City of Surrey would like to see commercial developments situated more closely together in the City Centre area. The Health and Technology District, pictured here, is approximately one million square feet of office and retail space that will be built in stages — but outside of a proposed “Central Business District” | Submitted

The City of Surrey intends to create a concentrated business district and expand its downtown core southward to accommodate the approved SkyTrain extension along Fraser Highway.

A proposed station at Fraser and 140th Street means greater residential density should come to a small area of detached homes immediately east of Surrey Memorial Hospital, according to a staff report from Jean Lamontagne, the city’s general manager of planning and development.

The area plan envisions Central Surrey as the Lower Mainland’s future second downtown. Its review will be in concert with an existing land use planning review of the Fraser Highway SkyTrain corridor that aims to increase density near proposed stations.

The small expansion to City Centre is aimed at capturing land within 800 metres of the proposed station. But about half that land, to the east of 140th Street, is designated as parkland (Green Timbers Urban Forest).

Planners intend to speak to existing residents about how to plan for future “transit-supportive densities.”

Planners intend to conduct an overall review of density designations, noting a recent pattern of area plan amendment proposals from developers to increase density and build other forms of housing, such as townhouses.

Lamontagne stated in his report the city intends to formulate a new density for cash and contributions policy by the end of the year.

“It is anticipated that additional supporting policies will be required to implement the density bonus regime in City Centre. This may include new direction on maximum heights and densities, rules relating to the consideration and valuation of in-kind contributions and possible exemptions to the Density Bonus Policy in order to achieve policy objectives,” Lamontagne said.

The area plan review “may consider” policies that would regulate: the number of family units in a development; ensuring all bedrooms have a window; requirements for lock-off suites; and tower spacing.

Within the area plan is an envisioned Central Business District — a small proposed zone in close proximity to Surrey Central station — that aims to foster commercial office development. When council endorsed the area plan review, it also approved a provisional policy requirement that new developments in the business district must include at least half of the floor area for office and institutional uses. 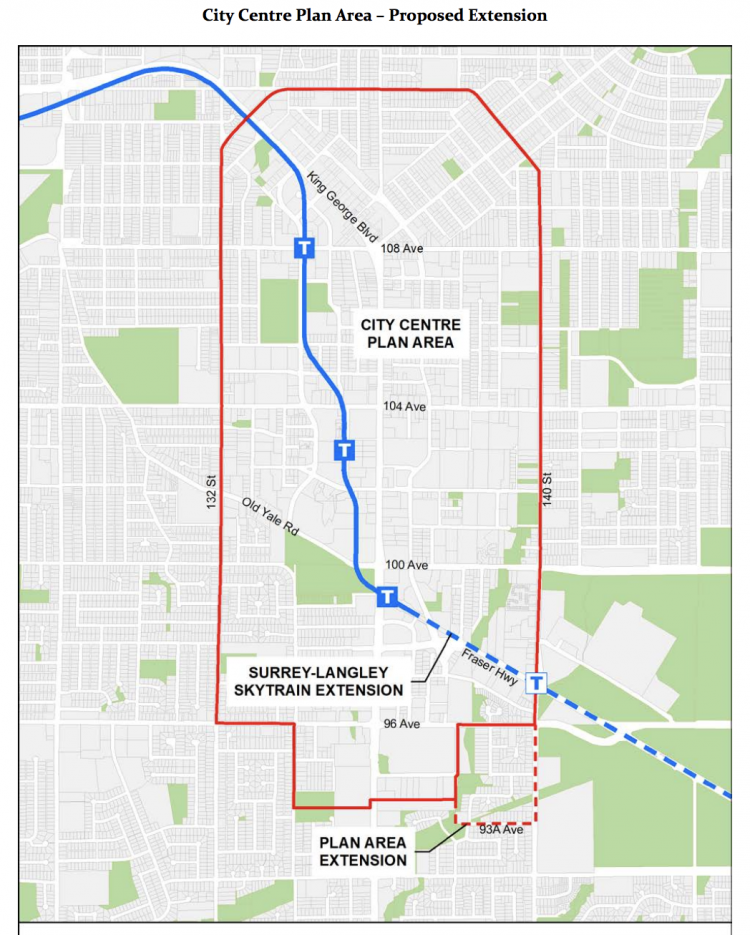 While the city wants to concentrate commercial space in the downtown core, Lamontagne said much of the recent new commercial developments have taken place on the periphery, such as new medical offices to the south, the new Coast Capital Savings head office at King George station and the Bosa Gateway office development at Gateway station.

“The establishment of a (Central Business District) that focuses office and institutional development would be a better signal of the City’s intent while enabling a critical mass of office space and jobs to form,” stated the report.

The SkyTrain extension currently has $1.6 billion of approved funding, enough for four stations to Fleetwood. Another $1.5 billion is needed to push the extension to the Clayton neighbourhood and City of Langley with four additional stations. An additional $420 million is needed to add three bus exchanges and park-and-ride spaces linked to the line. A business case is expected from TransLink in mid-2020.