By Glen Korstrom | November 26, 2019, 7:00am
VanGo Vapes CEO Saadiq Daya, now moving his 13-employee business to Coquitlam from Surrey, will have to spend money to recall products and then design, print and affix plain packaging | Chung Chow

The black market could be the big winner if the B.C. government follows through with plans to levy a 20% tax on all vape-related products, restrict access to those products and add deterrents such as mandated plain packaging.

A resurgent underground economy would keep the government from cashing in on the consumer trend toward vaping tobacco and cannabis instead of smoking those substances. It could also, say critics, put public heath at risk as people seek cheaper, unregulated products.

Established retailers and manufacturers could also see their businesses teeter if Health Minister Adrian Dix follows through on his vow to restrict sales of flavoured nicotine vape products to age-restricted stores, lower the maximum threshold of nicotine to 20 milligrams per millilitre and put in place new rules for plain packaging by April.

In addition to thousands of convenience stores and grocery stores, 150 specialized stores sell nicotine-based vape products in B.C., according to government figures. The province is also home to e-juice manufacturers, such as Premium Labs, Indulgence Innovations Inc. and VanGo Vapes.

“The vape economy in B.C. will potentially take a hit because you can go online and order from Alberta,” said VanGo Vapes CEO Saadiq Daya.

“If you order from Alberta, you’re paying 5% GST. Here, you are going to pay 25%” in provincial and federal taxes.

E-juices on sale in Alberta often have nicotine concentrations two to three times higher than what will be allowed in B.C.

Aside from lost sales, Daya’s 13-employee business stands to absorb tens of thousands of dollars in costs to recall products, and to create, print and affix new plain-packaging labels.

What makes matters worse for him is that last year he had to incur similar costs when Health Canada devised new regulations for vape products.

Fortunately for Daya, his fast-growing business has sales in the millions of dollars and a distribution network in Canada, the U.S. and the U.K. B.C.’s new regulations essentially make the province like a new export country, he said.

Dix did not respond to BIV’s question on whether he thought his actions could increase the size of the black market, but he said in an email that until the federal government brings in national regulations, “there will be a black market of non-compliant vapour products from other jurisdictions that can make their way into our province.”

One frustration for Daya is that the new regulations have a public health rationale.

Daya believes those cases stem from vaping concentrate formulations, not federally approved in Canada or the U.S., that include the active ingredient in cannabis, tetrahydrocannabinol (THC), and additives.

He said that the hospitalizations do not stem from vaping nicotine e-juice because the U.S. Centers for Disease Control and Prevention in early November said vitamin E acetate is a “very strong culprit” in recent vaping-related health problems. It based that conclusion on a study of samples taken from the lungs of 29 patients, including two who died.

Vitamin E acetate, Daya said, is used only in cannabis concentrates because it is a sticky and thick additive that would not synthesize well in nicotine-based e-juice.

His thinner e-juice is about 70% vegetable glycerin, with nicotine and food flavours added in the form of concentrated propylene glycol.

In contrast, vitamin E acetate synthesizes well with thicker concentrates made for cannabis-vaping devices, and could increase the volume of those mixtures, he said.

Scientists at Health Canada-licensed cannabis-testing laboratories told BIV that while vitamin E acetate could be used as an additive in THC-laced vape concentrates, it is unnecessary, and will be strictly banned from legal concentrates once those start appearing on store shelves in late December or next year.

“If concentrates are coming from the black market, you have no idea what’s in it, and that goes for both tobacco and cannabis,” said Ryan Pincura, operations manager at Kelowna-based Zenalytic Laboratories.

He warned that health issues could also arise from black--market vaping devices that incinerate, instead of vaporize, and cause carbon to be inhaled.

Andy Hale, CEO of Adastra Labs Holdings Ltd., which includes a licensed cannabis producer and a separate testing lab that performs cannabis-testing work for other licensed producers, said his company does not create formulations containing vitamin E acetate. He added, “We do not intend to include polyethylene glycol, vegetable glycerin or any other substance that cannot be found in cannabis naturally.”

Specialty vape-product store owners will gain from reduced competition once B.C. government changes to vaping laws take effect. However, neither those owners nor convenience store operators are happy with the new regulations. 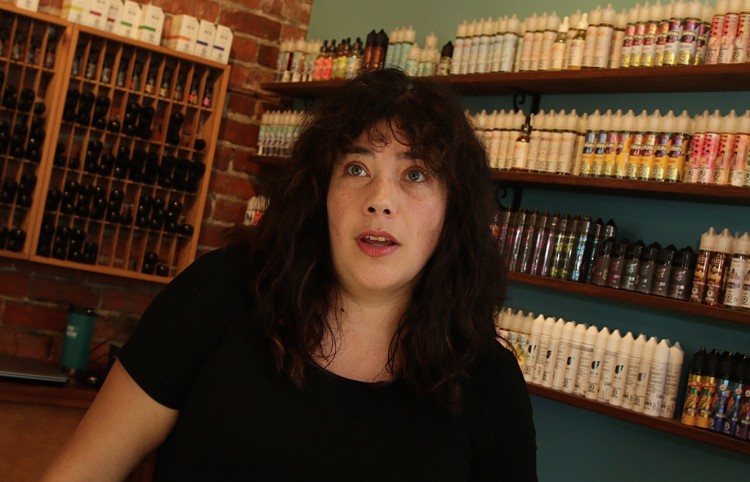 Convenience Industry Council of Canada representatives were livid at Dix’s plan to ban all flavoured vape products from being sold at convenience stores because the move would reduce sales for their 2,500 convenience-store members in the province.

“Convenience stores have an excellent track record of selling age-restricted products to adult consumers,” stressed president and CEO Anne Kothawala. “If sales are to be restricted to adult-only environments, then vape shops will need to have somebody positioned at the door to ask for identification, like nightclubs do, to ensure that they truly are an adult-only environment.”

Thunderbird Vapes co-owner Stacey White fears that the regulations could wipe out some among her suppliers that are unable to cope with the costs of recalling and reissuing products. That would diminish the number of products on her shelves, she said.

She estimated that her business has already suffered a 20% drop in sales during the summer, after headlines focused on vaping-related illnesses.

She also doubts that cigarette smokers will make the switch to vaping if cost savings that previously existed were eliminated.

Instead of turning to vaping e-juice, smokers who want to give up their habit may turn to an alternative that was put in place by former premier Christy Clark – herself a former smoker.

In September 2011, B.C. smokers became eligible to receive a free 12-week supply of nicotine gum or patches. They are also eligible to get coverage for anti-smoking prescription drugs that make smokers feel sick whenever they smoke.

Legal cannabis retailers will also have to charge the 20% provincial sales tax and the 5% GST on vaping devices specifically made for consuming THC-laden concentrates, as well as the concentrates themselves.

Given that this market has so far entirely been outside of the legal framework, it could be doubly difficult for them to convince black-market consumers to make the switch and start to vape legal products. One thing on their side, however, is that legal THC-laden concentrates will not contain vitamin E acetate. •