An 11-storey mixed-use building is being considered for a former Esso gas station site on Granville between West 70th and 71st avenues.

GBL Architects has filed a rezoning application for the project imagined for a now vacant lot at 8655 Granville St.

The application is being considered under the Marpole Community Plan. The building would feature retail space at street level, office space on the second floor and 55 condos with a mix of one, two and three-bedroom units. There would also be 73 underground parking spaces and 110 bicycle spaces.

Its design was inspired by the idea of “layered rocks, carved and etched by ocean waves through millions of years,” according to the application.

The property was purchased for $20 million in November of 2017. 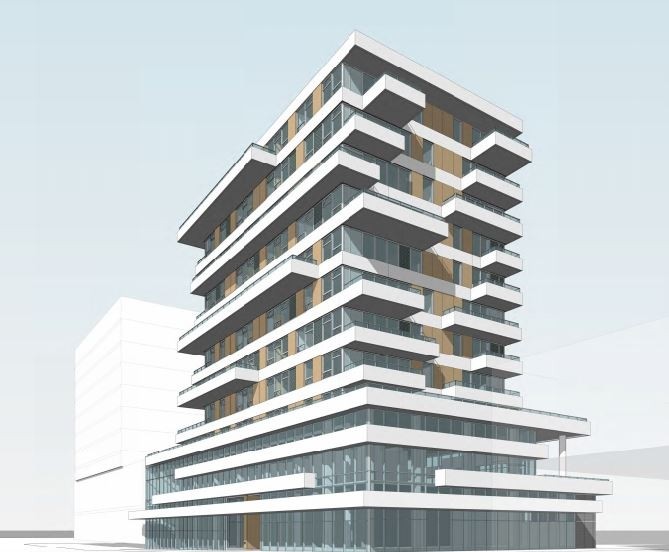 Several former gas station sites have been bought in recent years to be redeveloped.

One proposal by WesGroup, which is in the rezoning phase, envisions a six-storey condo at 3220 Cambie St. at West 16th Ave. The site used to be home to a Chevron gas station. BC Assessment valued the property at $19 million on its 2019 assessment roll.

A 33-storey residential tower is envisioned for a site at 1698 West Georgia at Bidwell St. The proposal is also still in the rezoning phase. If approved, it would replace a former gas station that used to be at that location. The property was assessed at $98.3 million on the 2019 BC Assessment roll, up from $65.5 million in 2017.